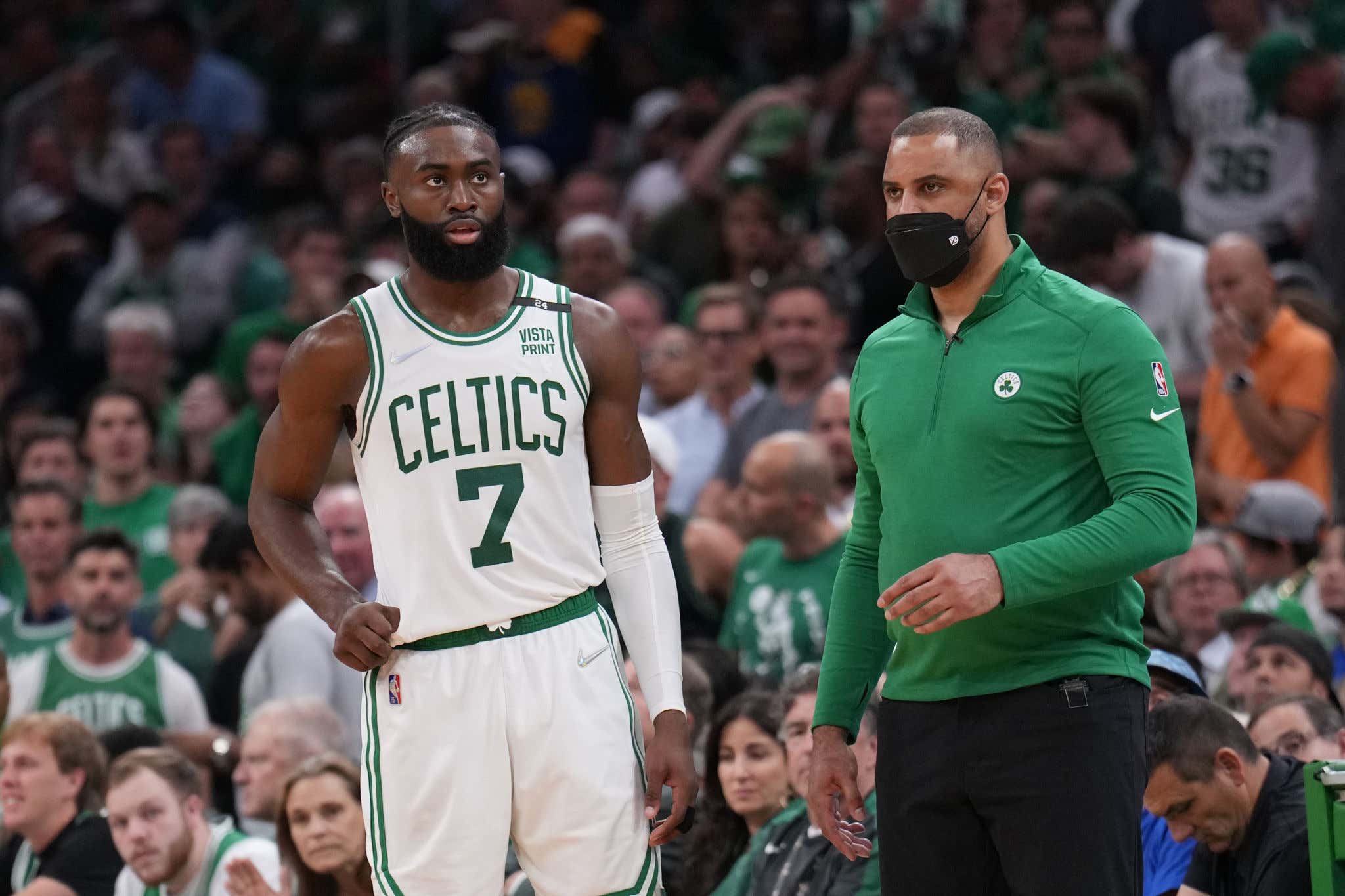 Yesterday was…..eventful. But not in the fun kind of way, more in the this all makes me want to put my head in the oven and crank that shit to 450 kind of way. As it was for most people, what started as a 2:30am Woj bomb and then became the Monday morning Shams bomb was very confusing. It seemed to come out of left field at a time where there isn't shit going on in the league right now. That's usually how Shams/Woj bombs work, but this felt different mostly because of how different their bombs were. As always, the wording with this stuff is always important to pay attention to.

I'll reiterate an important point I talked about yesterday. I am not someone who thinks Shams/Woj made this entire thing up. I think at some point there were probably some exploratory discussions on potential packages for KD. That's called due diligence. Seeing as we are all just fans with zero sources, all we can do is evaluate what reporters who actually have sources are saying as news comes out. I do think there's a difference in "discussions" compared to an "offer", although I'll concede I have negotiated a total of zero (0) NBA trades in my lifetime with an actual NBA GM and not just a fellow stoolie on Twitter. But something just doesn't quite add up.

Take the reporting of longtime Celts beat writer Steve Bulpett. As most Celts fans know, when Bulpett writes something, you read it. He's been doing this beat for longer than many of us have been alive, and he is someone who is about as plugged in as it gets. I found his nugget from yesterday interesting

In the Celtics’ case, The Athletic has reported that Jaylen Brown, who turns 26 in October, Derrick White and a first round pick were offered. One source disputed that to Heavy, but the question of offers and counter-offers often comes down to a matter of semantics.

“You may ask a team what they think of a certain one of your players, and the next thing you know they’re telling someone you offered him,” said a general manager. “You didn’t, but that’s how this thing works sometimes. It sucks — for you and for the player involved — but it’s the way it is.”

And the way it is is different when a player like Durant is involved.

“I’m not sure there’s a team that DIDN’T do their due diligence on this,” said an exec whose club has looked into the possibility. “I mean, when the Kevin Durants of the world become available, I’m not sure there’s any team that doesn’t call and see if there’s something that can be done. When you have players of that ilk, and there’s certainly not many of them, I think everybody kicks the tires and takes a look to see what would be involved in that.”

Hm, that seems pretty plausible right? Again, put any personal emotional aside and just go by the reported pieces. Woj was first, and his wording was very carefully framed. There was no mention whatsoever about an "offer" but around packages that could be offered. We're to assume that Woj would get the leak, but only 50% of the information? That seems a little far fetched. Then came Shams report of something that was an "offer" and not just a formal discussion. What neither of those reports told us was the timing around when this all went down. That's an important factor. Why?

Just think of the process. KD demands a trade. Brad and every GM on the planet does their exploratory due diligence. Scenarios and packages are discussed. We then went weeks with nothing. KD was still a Net, and one by one potential destinations came off the board. The Celtics specifically added Brogdon/Gallo to their roster which got us to these comments from Brad over the last 12 days that I blogged yesterday as well

OK, let's stop here and recap. When you think of who benefits from a story like this getting out, who is it? It's the Nets. In both of the Shams/Woj stories they talked about how KD still wants out. They both mentioned how it's been nearly 4 weeks and nothing has changed, either in his desire or the packages that the Nets are getting. So what do they do? Sean Marks tries to increase his market and set a baseline price. It's no different than what Daryl did with Simmons, which ultimately landed him Harden. So back to the timing aspect of this. We finally have some concrete reporting as to when these conversations actually took place, and it does change the dynamic of this conversation a little bit.

The Celtics' most serious discussion—as first reported by The Athletic's Shams Charania on Monday—in which Brad Stevens' front office was amenable to parting with Jaylen Brown, came weeks ago at the beginning of July, sources said. Representatives from most rival teams spoke with Nets general manager Sean Marks and other Brooklyn officials during the NBA's Las Vegas Summer League.

Since the end of summer league, the majority of consequential trade conversations around the NBA have come to a momentary lull, and team personnel aren't expecting any blockbuster trade any time soon. That will only change if and when a team makes a sudden full-force effort to acquire Durant or Utah Jazz All-Star guard Donovan Mitchell.

Boston's conversations for Durant, specifically, were considered by both teams as part of the Nets' first stage of continuing negotiations, sources told B/R.

Amid all the chaos yesterday, you know who had this first? 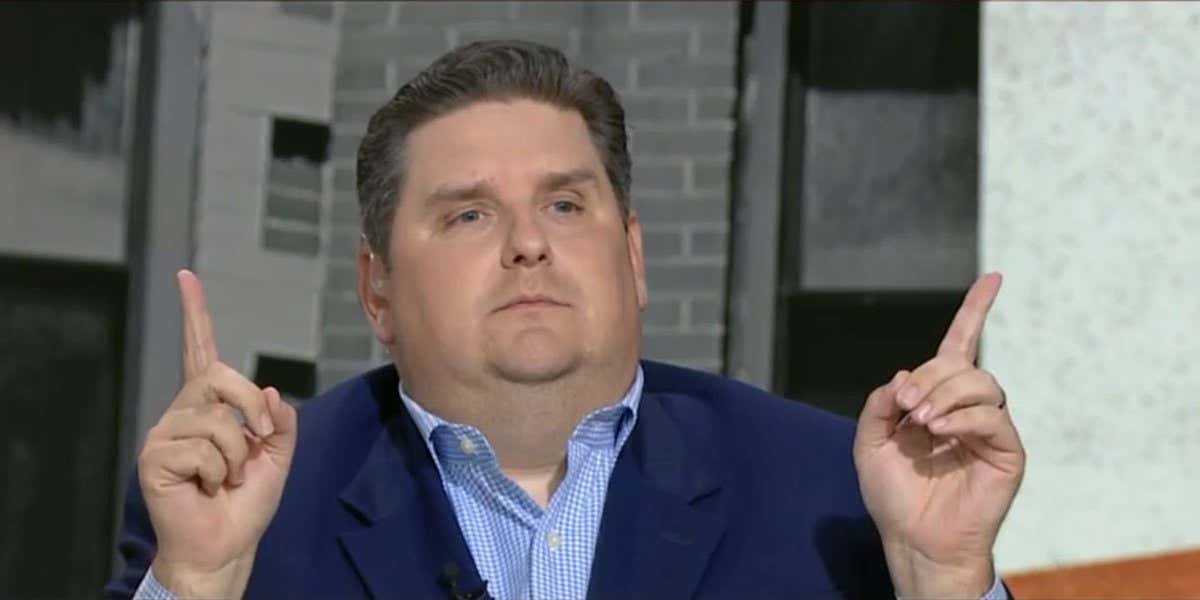 OK, so this is now two reports talking about how this shit between BOS/BKN is fairly old and was part of the initial exploratory talks. That's a very different picture being painted than how Shams framed things yesterday. This is where things don't really add up. You have the initial conversations, those don't get all that far, Brad retools his roster, goes on record multiple times talking about adding and not subtracting and his roster depth and all this shit, and then weirdly there's a report that he made an offer during a time when nobody is stepping up to the plate and giving the Nets what they want? I don't know how much clearer it could be at what this was by Sean Marks and the Nets. They in a sense used Shams/Woj as a puppet to bring all this up again and re-establish the market.

Which brings me to Jaylen's SMH

When we first saw this tweet, I was curious. What type of "smh" is this? Was it a "I'm pissed" smh, or was it maybe the fact that Jaylen knew all this shit was old and a nonstory and now it was a thing again. We're to believe Brad isn't in communication with Jaylen? Does he look like a moron to you? I'm also pretty sure Jaylen is smart enough to know that any sort of KD talk is going to revolve around either him or Tatum. I would also ask if that package was a true "offer" and not a "discussion", after looking at what the market is for BKN, how do they not accept it? Jaylen is the best player we've heard about. If this was actually just part of the initial exploratory conversations, then yesterday makes a bit more sense. Think of it from the Nets side. You put this out in hopes of raising the market because any of the actual "offers" you've gotten don't fit the bill. You also help cause any potential disruption to a division rival that just swept your ass out of the playoffs. It's strategic and calculated. This is why I don't think Shams/Woj are making any of this up, I think it's more they are just reporting what the Nets are telling them, who have a clear motive. As more reporting has come out with this whole thing, that's become even more clear.

Which then ties back to Jaylen and his mindset. We have two more reports about this that certainly are something I would call important. A huge "storyline" to all this is that Brad has to trade Jaylen now because he's going to leave Boston in 2 years and that he wants out. The first report came in the thick of the drama yesterday from Celts beat writer Mark Murphy

Hm. That was interesting. But hey, it's just one report. What about what Wiggy said on  WEEI huh? Remember that? He was told by Jaylen in a hookah bar that he was going to leave! Well…about that

You have to feel for Brown. He’s turned into one of the top players in the league, but hasn’t spent more than a few months of his six-year career out of trade rumors. There comes a point where their persistence becomes exhausting over time.

That doesn’t yet seem to be the case. For all the hiccups in Brown’s relationship with the fanbase, he’s still committed to Boston. When WEEI’s Jermaine Wiggins claimed that Brown told him he wouldn’t re-sign in Boston when his contract expires in 2024, Brown was perplexed and denied the report behind closed doors, sources familiar with Brown’s thinking told The Athletic. In spite of the trade talks, Brown wants to be in Boston.

Is it possible a dying radio station/morning show perhaps created something for attention/clicks? Is that totally out of the realm of possibility? Now let's also be fair here. It's not all that shocking that these reports were refuted by Jaylen's side. That is kind of expected. But if we're going to play this game where we treat the "sources" and "reporting" as fact, then that has to happen for all of it no? Even the ones that tell us Jaylen is happy and wants to be in Boston. I guess it comes down to who you put more stock into. Guys who are plugged in and have covered the Celts for decades, or a radio host that suggests Jaylen confessed his entire plan in a hookah shop 2 years before he even hits UFA.

- I do think Brad and BKN talked about KD. They most likely discussed a wide variety of packages/combinations, ultimately not finding anything that works

- Brad then made his free agent moves and moved onto a different path, which is why he talked the way he did over the last 12 days

I don't think that's all that far fetched. I think you're a little naive if you think Brad never mentioned Jaylen in any sort of discussion for KD. But the idea that this is something actively being "offered" and negotiated doesn't really add up based on the most recent reporting. It's not a stretch to assume that the "discussions" fell flat and Brad then went the Brogdon/Gallo route. Sean Marks phrases it as an "offer" to Shams as a way to make it seem more legit as a way to twist the screws of other teams he may be talking to. Again, that's not really a stretch either.

That's where we stand as of the writing of this blog. My guess is there will be more "reporting" and more "sources" about this shit as we move forward as long as KD is still on the Nets. That's how the NBA works, everything is about leverage. You have to take a step back and think of who these leaks benefit most. It's pretty obvious the answer there with this most recent drama is clearly BKN.