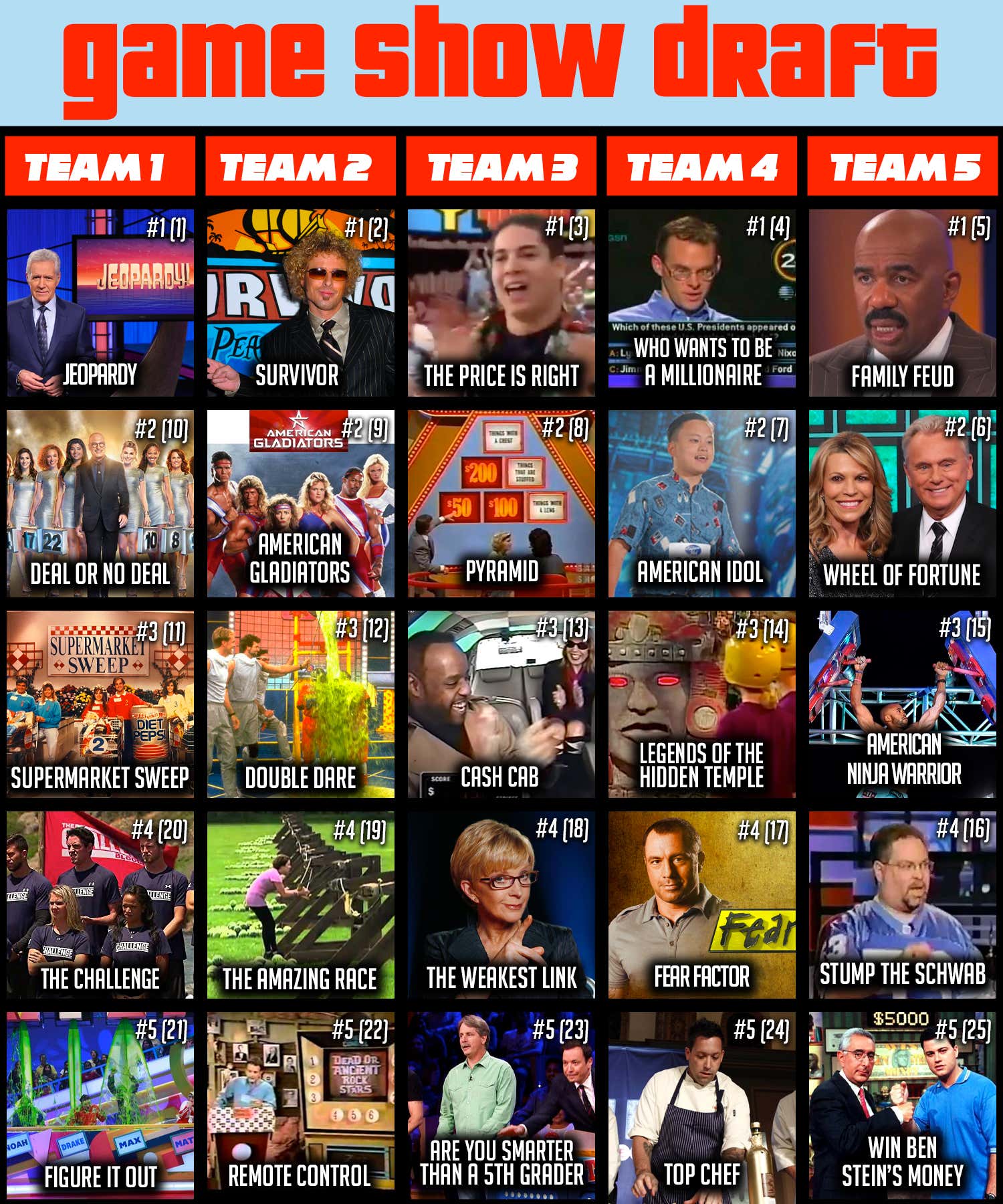 I was 100% in agreement with the Drafter here as I'm not a Jeopardy guy, but it is an absolute no brainer 1.1. Jeopardy has so many stans out there and it's been on for so long and is so iconic, you can't really go in another direction. Eddie brought up a great point that if one of the greatest QBs ever left after an MVP season to host the show, it wouldn't have been viewed as a crazy move for his career. Deal or No Deal wasn't crazy strategy or knowledge, but was an entertaining watch. I was also in agreement with the panel that there was a steep drop-off after the top six. Supermarket Sweep is another kind of fun niche game. Round 3 was fair value in my book. The Challenge in Round 4 is the steal of the Draft. I think you could make the argument based on longevity and cultural relevance to that it could be a 1st rounder, so in the back of Round 4 that's a dynamite pick. Figure It Out was fun for a bit and Summer Sanders STILL brings the heat.

An absolutely DIABOLICAL move stealing Survivor the pick before one of the biggest Survivor fans of our time. The fact that they were sharing a camera makes it even better. Hard to argue against one of the first really big reality game shows. American Gladiators I loved, but Round 2 felt a bit rich for me. And again, there is a huge drop-off after the top six so hard to argue with the order of these selections. Double Dare was a cornerstone show on Nickelodeon for a really long time and The Amazing Race is an interesting hypothetical for couples who think they don't get mad at each other. Remote Control is a fun throwback and good value in the 5th Round. Good draft!

So downtrodden after missing out on Survivor. Gotta deduct points for strategy here which clearly backfired. The Loud Sean graphic for Price Is Right is sneaky hilarious. I thought this draft was lacking much star power. Price Is Right is fine and probably rightfully 3rd overall, but the rest is just meh. Pyramid Round 2 is tough for anyone that can still get regular boners without assistance. Cash Cab had a brief moment and is a fun idea. The Weakest Link had about as long on NBC before burning out and Are You Smarter Than a 5th Grader did about as well as you'd expect a game show on FOX in primetime to do.

The moment that guy from Who Wants to Be a Millionaire used a lifeline to call his Dad to say he was going to win the million dollars is one of the greatest moments in TV show history:

Millionaire at the time was the most popular show on TV. As Klemmer astutely pointed out, almost brought down the network ABC as a whole because they were drinking their own Kool-Aid so much. American Idol was a solid pick in my book. Hilarious how White Sox Dave tried to argue that the show produced a ton of stars and after Carrie Underwood mentioned Rueben Studdard and how he never really did anything. But that show too had a ton of momentum before several spin-offs aired on other networks. Legends of the Hidden Temple is an ok pick, but would have liked to see more in a 3rd rounder. Fear Factor is ok, but I'd prefer The Most Dangerous Game Show.

Top Chef in the last round is a good pick in my book, but funny how this drafter was called out for never having seen it and then had zero clue what network it was on and could describe almost nothing about the show. Deducting slightly for pandering here. Good draft overall though.

Good value here at the turn with Family Feud and Wheel of Fortune. But may I say, it was an absolute delight having Chris Klemmer on the show with his historical knowledge. Dropping the fact that one of the hosts, Ray Combs committed suicide moments after the selection was made completely torpedoed the selection. A weird thing that didn't get discussed, is the original host, Richard Dawson used to kiss all the female guests on the lips. Like if it was a Dad, Mom, Son, and two Daughters, he'd kiss everyone but the Dad and Son on the lips. Lucky for him, he finished his run as host in 1985 as that shit would not fly in 2022. Wheel of Furtune is solid and Vanna White has still got it.

American Ninja Warrior is a fun watch sometimes when you're feeling athletic. I love the late round value here with Stump the Schwab and Win Ben Stein's money, which were two game shows on not typical game show networks (espn2 and Comedy Central respectively). Those two push this up to a B+ for me.

Who do you think had the best draft? Vote here: