I'm sorry, but it's time to acknowledge what an awesome offseason the Detroit Pistons are having. That was sneaky already true before this announcement but now that we're officially adding their classic throwback look into the mix? That's how you have yourself an offseason. It started at the Draft when Jaden Ivey fell into their laps only for him to immediately look awesome in Vegas

and if you watched any of the Pistons last year you know they were sneaky much better than their final record showed. They are a bitch to play and then some. Sure their 23-59 final record doesn't look all that great but if you look at their schedule over the last half of the year they were pretty much competitive every night regardless of opponent. Just look at their scores from the trade deadline through the end of the year 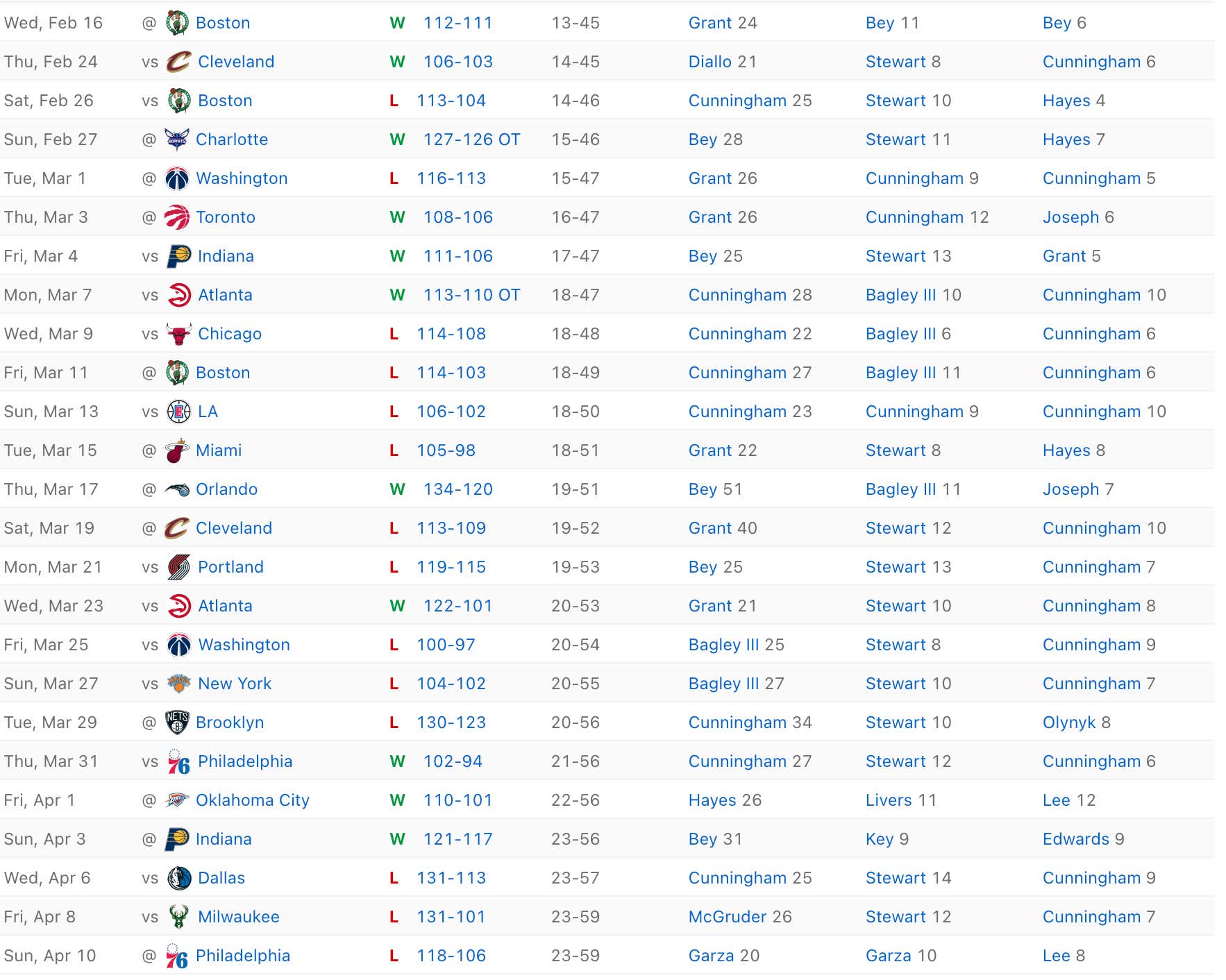 Yeah, there are a ton of red Ls in that picture but look at the scores. They were in pretty much every game they played. I would describe it as the perfect tank. Your young guys are scrapping and showing development, you're playing competitive games but in the end you're still getting the losses you need as a team that had the goal of tanking. Cade Cunningham proved that he's "that guy"

and this was all before they unleashed the teal jersey look. I cannot stress how awesome that is and frankly something the rest of the NBA needs to wake up and realize. You know what people hate? This shit

You know what people love? Vintage 90s throwbacks. Doesn't matter who the team is. The world is better when that look is back in the NBA so the fact that the Pistons have brought it back is fantastic not just for old people like me, but for anyone who has eyeballs. I'm not sure how many wins this adds, but there's a number. When you add up all their offseason moves plus this announcement, you could talk me into the Pistons taking a leap and competing for the 7/8 seed. That might sound ambitious for a team that went 23-59 but look at those things. They are sweet as hell! There's something to be said about the whole "look good feel good play good" mantra.

I have no idea how many games they plan on wearing these for, but it's certainly not enough. That is unless this becomes a full time thing. I'm not sure if they are allowed to do that but they should be. This is an all time throwback on par with the pinstripe Magic/Hornets, purple Jazz, vintage Suns etc. Putting a games limit on these is mean, just give the people what they want and the people want 90s throwbacks at all times.

Just don't be surprised when the Pistons are one of the surprise teams next year. Remember last season when the Cavs came out of nowhere and were safely in the top 8 before injuries fucked them? That could easily be the 2022-23 Pistons, especially with these now in the mix.