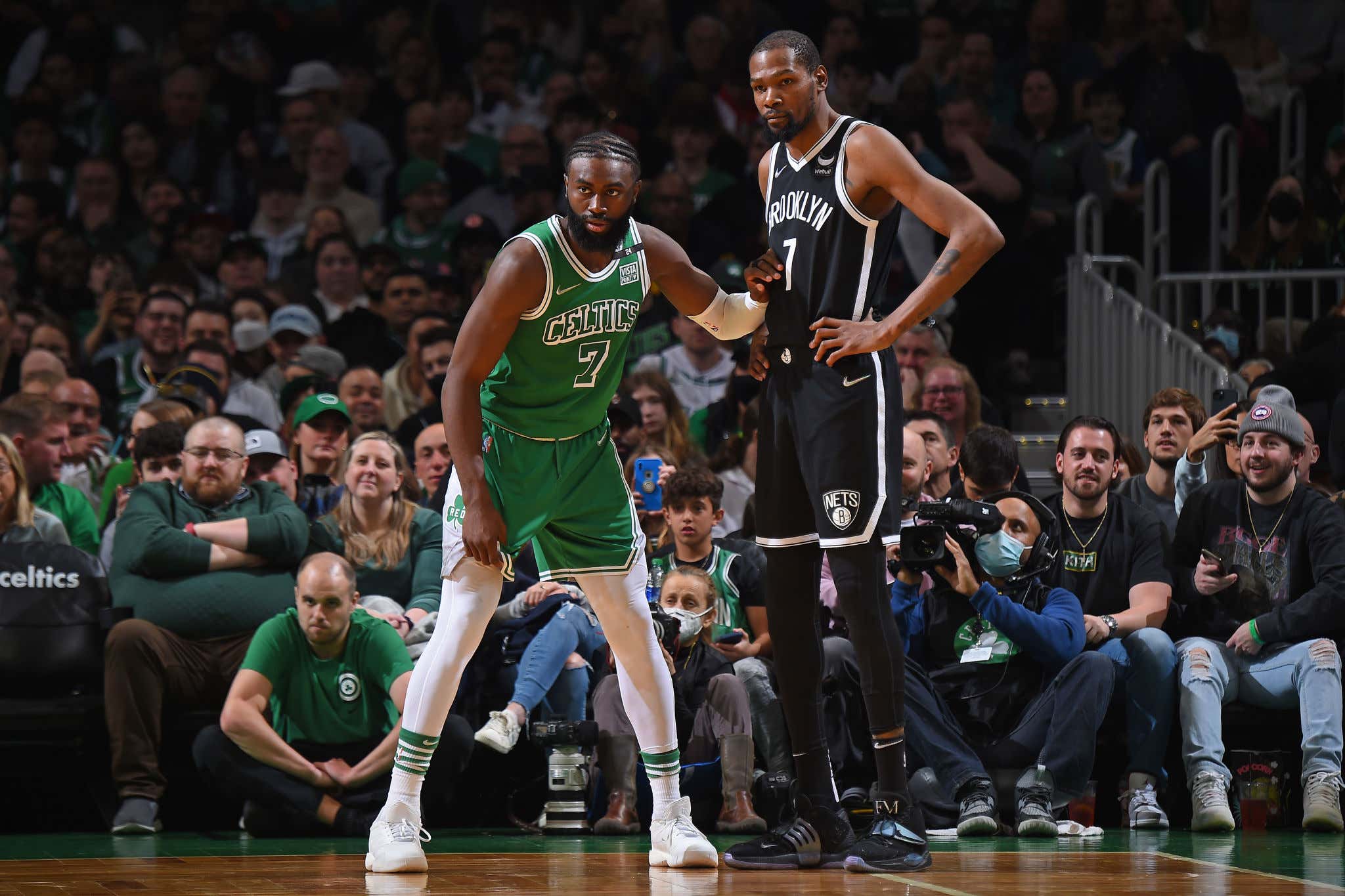 Buckle up folks because things just got nuts.

It all started at about 2:30am ET when you thought you were going to be able to go to sleep. You fool. It's the NBA offseason when anything could happen at any moment. It was at that time when Woj dropped this nuke

As is always the case whenever you see a Woj/Shams tweet with "Boston Celtics" in it, immediately I had a heart attack before I even got to the end of the tweet. I clicked the link and speed read so fast it'll make your head spin. I didn't even know I was capable of reading that fast. After making my way through it, there really wasn't anything all that concrete. You read this

The Celtics consider All-NBA forward Jayson Tatum off limits in any trade talks, but Boston is able to construct a package for Durant that could include Brown and as many as three unprotected first-round picks (2025, 2027 and 2029) -- and two pick swaps (2024 and 2026). Brown, 25, has two years and $56 million left on his current contract.

and how there is no deals that have traction, and it reads more as something the Celts could offer. That's not really news. Nowhere does it say they did offer that. It was pretty clear from that wording that the Nets were trying to get the price back up after these last 4 weeks have shown team after team not willing to give up their best players/assets for Durant. Your classic leverage leak.

Then we all woke up this morning to the Shams drop. If you were curious why Woj put that out at 2:30am, it's because he probably wanted to be first. He knew Shams had info too. This report from Shams is obviously much, much different

The Celtics offered Brown, guard Derrick White and a draft pick to the Nets for Durant, sources said. The proposal was rejected, and Brooklyn has asked Boston — in any proposal — to include Brown, Defensive Player of the Year Marcus Smart, draft picks and potentially one more rotation player, those sources added. Currently, the Celtics are less inclined to include Smart along with multiple other player or pick assets, but the franchise is mulling over next steps on how to approach discussions.

As of right now, the Celtics have emerged as a serious possibility as a landing spot for Durant. They have tremendous interest in bringing him in and view him as a piece that could take them over that final hurdle. Although there is work to be done, there is a deal to be had that would suffice the Nets’ overwhelming ask.

Now we have a legit offer. Jaylen/White/and a pick. For the record, I'm all set on that too, but then you see the Nets response. They want Jaylen, Smart, picks, and another rotation player. No fucking thank you. Sean Mark can go to hell as far as I'm concerned. As of right now, today, without Kevin Durant, the Boston Celtics as constructed are the NBA title favorites.. How does gutting your roster with 3 rotation players, two of which being Jaylen/Smart make you closer to an NBA championship than you are right now? It doesn't. It's not like this is some sad franchise who can't ever make a Conference Finals or something and needs to drastically change the collection of talent on this roster in order to get over the hump. They have proven they are contenders and were able to add to this roster to address weaknesses WITHOUT gutting their roster. Now they're going to gut the roster for Durant? Why?.

I'd be shocked if Brad pays that asking price the Nets came back with, but let's put that to the side for a second. Let's talk about what truly matters. It sort of comes down to which reporting you stand with. On the Woj side, there's no mention of any sort of package. So did he just not have that info? I would imagine he was talking to the Nets, so that seems weird. If the Nets wanted to raise KD's value, why wouldn't they tell Woj this offer? Then there's the Shams side where an offer has actually been made. That has the potential to completely change the dynamic not just of this trade, but the aftermath of what happens if it doesn't actually happen, So the question is, what next?

Coming into this all important season, do I now need to worry about Jaylen's mentality and desire to be a Celtic? How would you feel if you had a hell of a year, was a beast in the playoffs, was someone who actually showed up in the Finals and the next thing you know you've been offered in a trade? Would that make you down and excited to be on your current team? Would that make you want to stay? Let's be clear here for a second. If that trade offer is actually real and Brad did offer it and the Nets decided to say yes, Jaylen is a Brooklyn Net this morning. That's a bit concerning. I also don't really know how to feel about this 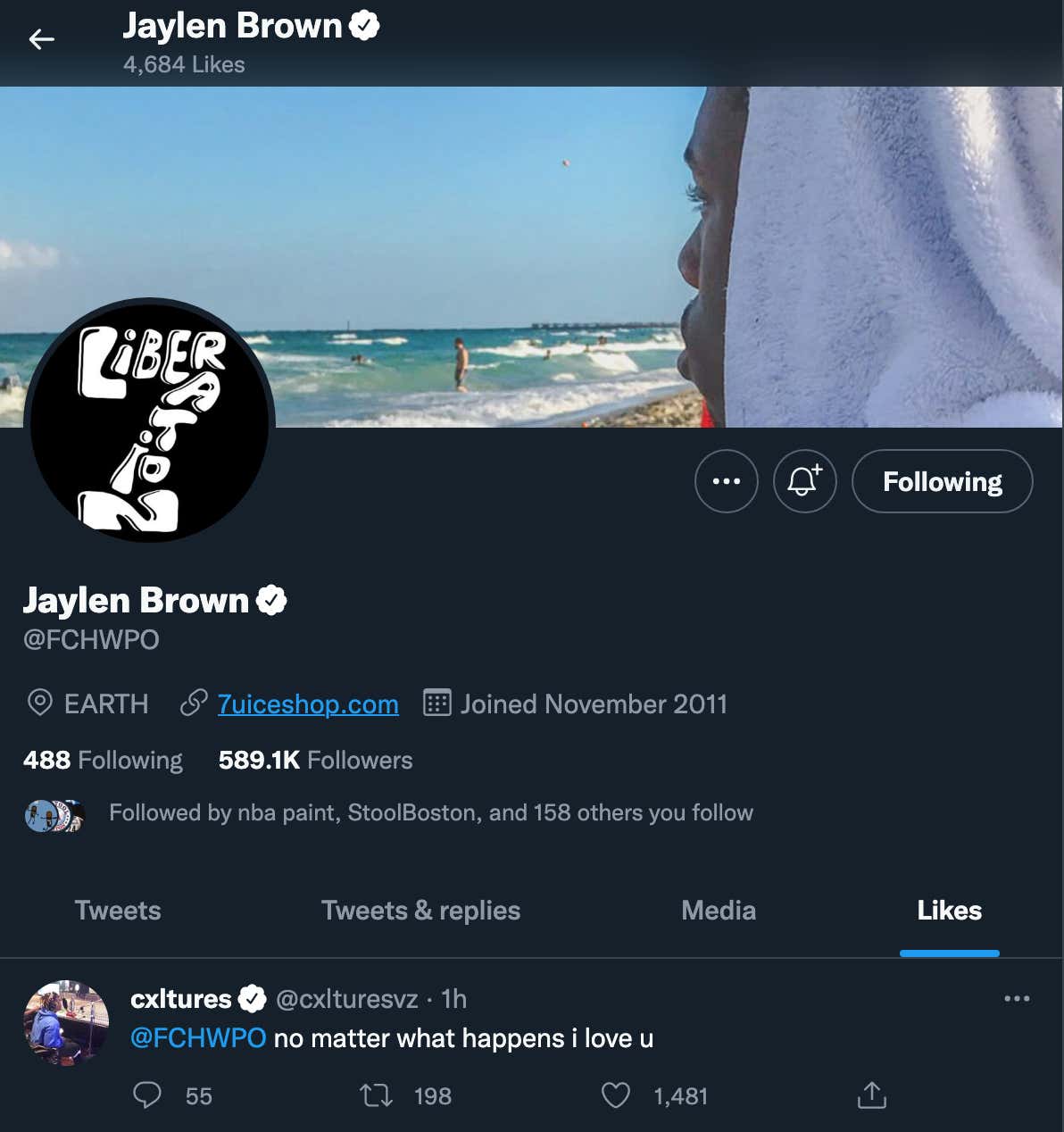 I don't think it's exactly news that the Celts would call about KD because every team is going to call. I'm sure every player combo you can think of was discussed involving both Tatum and Brown. That's probably how these things work. My question is more around what happens when a name/trade package is actually reported. Once that cat is out of the bag, is the damage done? For all we know Brad has already told Jaylen this is all bullshit. It's also possible he called Jaylen and told him that it's true. We don't know. I just think it's a little odd that not ONE Brad move that was real had any sort of leak. Not a single one. That's why this still feels like an intentional leak to drive up the price compared to what is actually possible. Read that Nets response again. For a market that doesn't look all that great for KD, that's an insane package. Who are the Celts competing against? Tyler fucking Herro? OG Anunoby? I'm pretty sure you don't have to gut a championship caliber roster in order to beat packages surrounded by those players.

It's certainly not the first time Jaylen has been talked about in trade rumors, literally happens all the time. Brad and this franchise has shown us they are committed to Jaylen and Tatum as foundational building blocks. I think Jaylen is smart enough to know he's good enough where he's going to be talked about in something revolving a player of KD's caliber. So maybe all this noise doesn't even phase him. You don't know, I don't know, anyone who says they do is just speculating on bullshit. I would say only Jaylen and maybe Brad knows.

The thing is this isn't really about Durant. He's a basketball alien. One of the best to ever do it and that is true to this day. But given his age and price, I just don't see the point when it comes to this roster. There is no guarantee you are any closer to a title with whatever you're left with plus Durant as you are if you never do the trade. That team is currently the NBA title favorite, without Durant. Why not see what things look like with the new and improved roster? That feels more Brad's speed but you never know I guess.

I thought we were done with this dance to be honest. That's why I think I'm more annoyed than anything else. And a little scared. I would prefer to not trade my 25 year old franchise building block who gets better every year. That's just me though. But now we can bank on this being the #1 story in the NBA right now. It's July, there's nothing going on, people are starved for drama and news, and now we have it.

I think I'm going to puke.