I'll tell ya what. It's a shame. It's a real gosh darn fricking shame. Because to the untrained eye, this might look like Lyle Thompson was out there button mashing. To a casual bystander, this might just come across like some dumb luck.

But anyone who has had the pleasure of watching Lyle Thompson play the sport of lacrosse for the past 10 years knows exactly what we witnessed here. Just another example of Lyle Thompson doing things that pretty much nobody else on the planet besides Lyle Thompson can do. Maybe Jeff Teat? Maybe. But even still. This is just what happens when you have someone out there like Lyle who doesn't see the game the same way that any normal human does. The fact that he can get himself in this position: 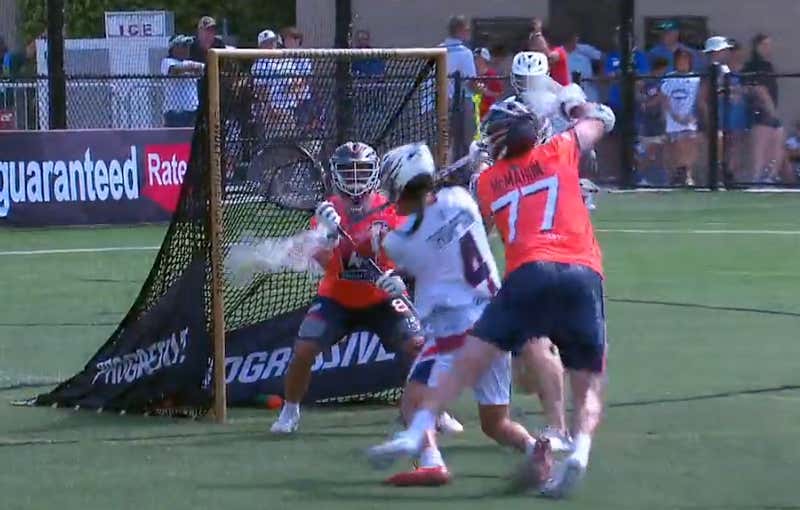 And have it result in one of the best highlights of the summer instead of a quick turnover? Preposterous. Falling over, defender draped on his back, crosshanded, back of the net between the 5 hole. It's gross. Even the amount of space he created for himself on that initial flip of the hips was gross. But credit to Matt McMahon for somehow miraculously being able to recover and get his stick in the lane to make sure Lyle wasn't able to just snipe a corner right away. Unfortunately the ball still ended up in the back of the net all the same, but still credit where credit is due.

Oh and speaking of ridiculous corner snipes, let's talk about this backhand rip from Ryan Drenner.

I mean that was like an inch and a half away from being the nastiest shot ever recorded. Absurd. Even more absurd is the fact that the Cannons scored all these goals and still ended up losing the game 17-12 to Archers. But yeah, maybe it's time to start the #FreeLyle movement. Lacrosse fans everywhere are getting shafted having to watch him play with a 1-5 team sitting in dead last place right now.