I'm a firm believer that every wedding, Jewish or not, should have the Hora dance involved. It's exhilarating. It's like the Cupid Shuffle only a thousand times better because you don't have a group of try hards who think they're the greatest cupid shuffler known to man the moment the song comes on and tries to make the dance floor all about themselves. It's just a bunch of guys and a bunch of gals jumping around in a giant circle vibing. It's about the squad. The whole crew is thriving. And nobody was thriving in this crew harder than Joel Embiid.

It might be a little tricky to point him out in this video but he's the gigantic Cameroonian who is at least a full shoulders and head taller than everybody else on the dance floor. And as if Joel Embiid wasn't already so much higher off the ground than everybody else at the wedding to begin with, he got up even higher once it came time for the chairs to get involved.

But yeah. This face right here? This is the face of a man who is having the time of his life. 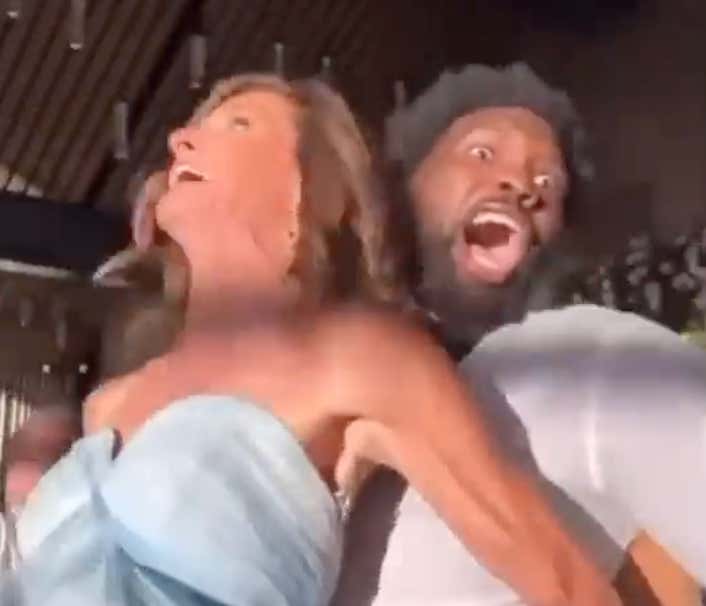 Truly a man of the people. You think Ben Simmons would get in the mix like that if he were invited to a wedding? No chance. He'd be one of those losers that just sits at their table the whole night waiting to go home. He'd just be looking at his phone the whole time the Cha-Cha Slide was playing. But Joel Embiid is right in the thick of things. He's all-in like any natural leader would be. I just hope the entire city of Philadelphia is ready for the massive Hora circle around Eakins Oval at the Championship Parade next summer.