On today's ZeroBlog30 we talked about Joice Figueiró, a woman who gave birth during a Metallica concert in Brazil earlier this summer. Though she was 39 weeks along she'd been feeling great, got the green light from her doctor, and stayed in a special section so it doesn't seem that crazy. Plus she'd also said her first child took 36 hours of labor, so even if contractions began, Figueiró & her partner, Jaime, probably assumed they'd have plenty of time... But lo & behold, by the end of Enter Sandman, Luan had entered the world in a medical area behind the stage: 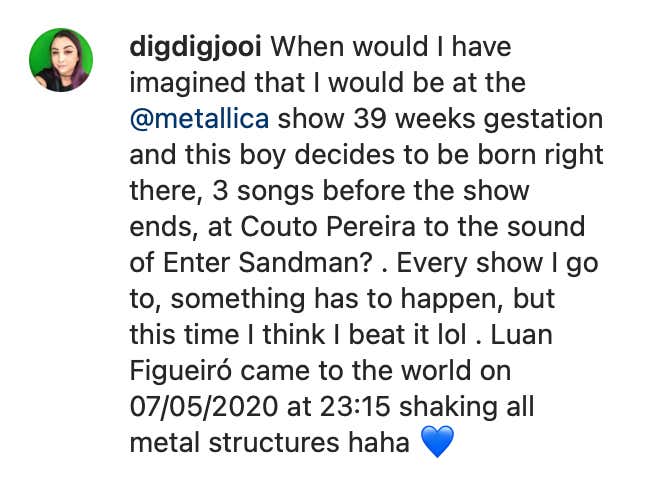 The story immediately began going viral, and in another post the couple shared the call they received from James Hetfield. The first thing he asked was if everyone was doing ok & if they'd been scared, and the convo was really sweet as they told him the whole story.. (She'd only had 2 small contractions, but then they suddenly kicked into high gear during Master of Puppets, classic!). Hetfield then declared the whole band would be the baby's Godfather, which will make this kid automatically cool on the playground circuit when he's older. 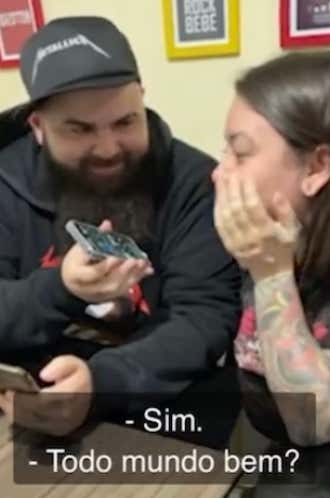 The band also sent them a bunch of tiny Metallica merch along with a card signed by the whole band. Not included? The Babies Go Metallica album which is actually a delight & that I used to play for my own baby when I couldn't take the nursery rhymes anymore.

I'm not go-to-a-show-at-39-weeks-pregnant in love with Metallica, but I did see them in San Francisco many years ago whilst possibly trippin' some balls & my God they were fucking amazing. (Apologies for the cringe video but it's the only proof I was there.)

That being said, if I were to give birth at a concert during a specific tune I'd have to go with Led Zeppelin during the opening to Immigrant Song. The intermittent "aaaAAAAAA-aaaHHHHH-AAAAHs" are perfect for a lamaze vibe and it's a good hype song for someone knowingly about to blow out their vagina. I'm never having another kid but in the off chance another margarita night gets away from me & I'm wrong, I'll be hitting them up.

-Update on the Sarah Cavanaugh case. If you recall, she was the fake Marine who got hundreds of thousands of dollars pretending to have cancer and a shit ton of other things. Justice was served like a plate of spagetti at Newark International Airport.

-NASA & the James Webb telescope photos: we have small brains that can't comprehend it

-The wild story of how an American POW who was captured by the Germans ended up escaping, fighting alongside the Soviets in WWII, and probably having the biggest dong in an era of big ole dongs