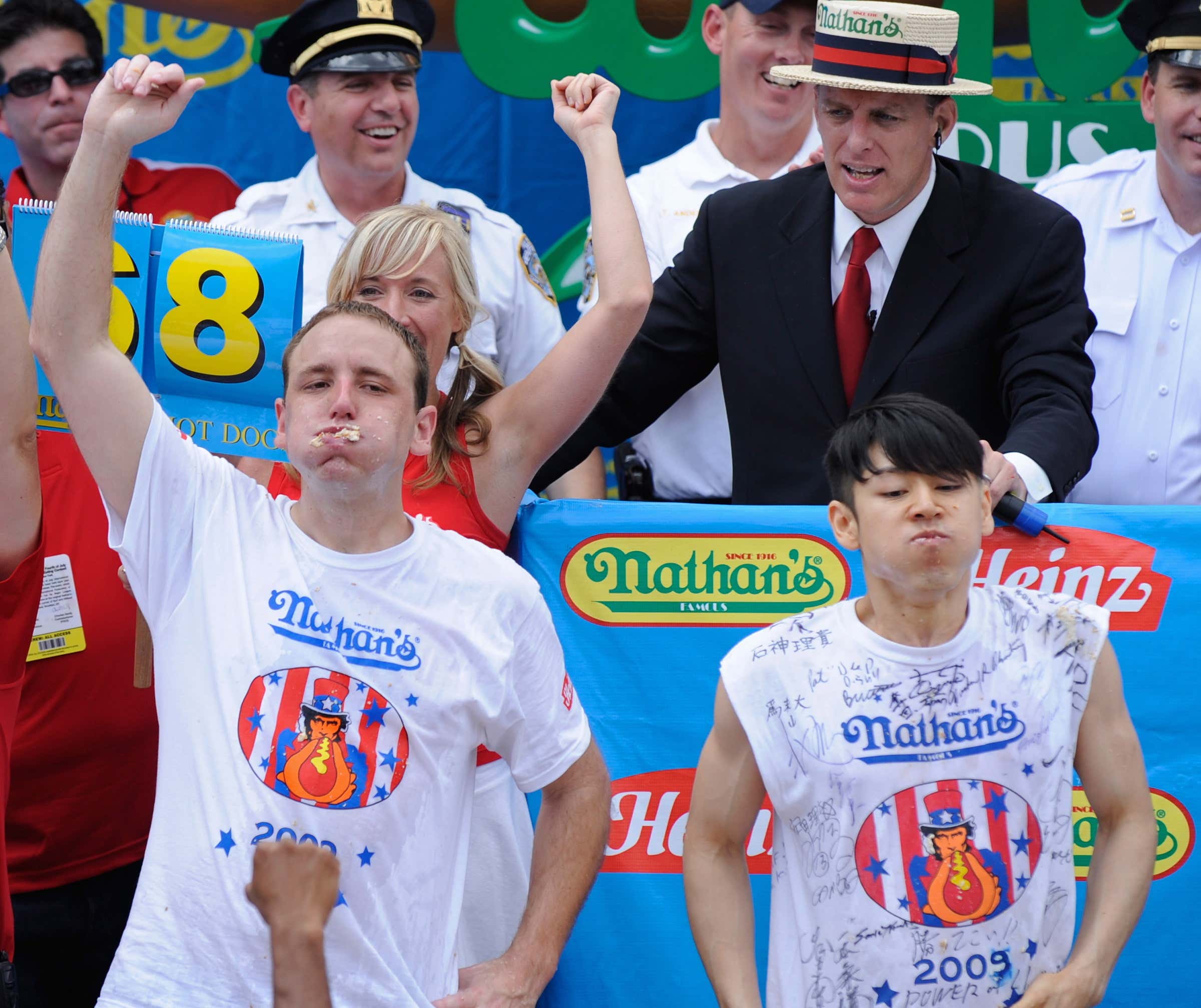 On today's Pardon My Take… JOEY CHESTNUT! One of the greatest Americans out there joined Mr. Cat and Mr. Commenter on today's show to break down his newest Nathan's Hot Dog Eating Contest title from last week, taking down a protestor, eating with a leg injury, and much more. Another topic that the guys got into involved a potential renewed rivalry with Takeru Kobayashi. How realistic is it for these two Major League Eating legends to face off again in the near future? Let's hear Joey Jaws' thoughts…

Joey Chestnut: The most I've ever eaten in a 10 minute practice is 82, but those are perfect conditions, perfect hot dogs, I'm feeling tits. I mean, I'm feeling really good. And who knows, definitely 80 is possible for me, but it's more possible if somebody is pushing me, and maybe Kobayashi will come back. The end of this year is going to be a weird year for me because my contract with Major League Eating and Nathan's is going to be over. So it'll be my first year in a long, long time that I can actually eat against Kobayashi. So me and him could find a way to compete because he'll never compete with Major League Eating again because they have just a childish contract dispute, but there's a chance that I might be able to eat against him.

Mr. Commenter: That's interesting, so you're going to be a free agent for the first time really in your professional career.

Mr. Commenter: You get to see what else is out there, I was joking around, I was like, well, the LIV Tour, there will never be like the Saudi Public Investment Fund will never sponsor a Hot Dog Eating Contest, but I think if it's you against Kobayashi…

Joey Chestnut: They're not pork, as long as they're all beef hot dogs, they might be all about it.

Mr. Commenter: There we go. I mean, that's that's the way to grow the game. I would love to see you compete against Kobayashi because the rivalry you guys had, I thought was really good for the sport.

Mr. Commenter: So, I mean, you're on top of the world right now. If there's anybody besides you, actually, you know what? Big Cat, sidebar… What if we did a Rough 'N Rowdy? But the main event was Joey against Takeru Kobayashi.

Mr. Cat: Yeah, how much we got to pay for that?

Joey Chestnut: I have no idea. I would do it for whatever he wants, as long as it's even, and we can put in a prize, a purse, I'm fair. That would be awesome. The Rough 'N Rowdy crowd, I think they would like it.

If you haven't seen it yet, I highly recommend watching the ESPN 30 for 30 documentary, "The Good, The Bad, The Hungry." It dives into the details of the Chestnut vs. Kobayashi rivalry and everything that happened in between. Will we see these two gentlemen face off in the boxing ring while eating hot dogs? Time will tell.