I'm going to start posting some old blogs that got about 20 views the first time around. Figured they might do better now. This is one of my favorites.

Every morning Oscar The Grouch wakes up inside of a trash can. Oscar rises from the depths of his can, barely peaking his head out. The lid sits crooked upon his head like a hat. Oscar takes a look at the world around him. It is a dump. A gang of street youths lead by a 7 foot tall yellow bird begin to heckle him.

"Fuck you Oscar you piece of fucking shit nobody loves you."

It's the truth. Nobody loves Oscar anymore. Oscar recedes back into his trash can and closes the lid over his head. It's safer in there. When the trash can is closed, nothing can hurt him. Not the children, not the bird, not Snuffleupagus. But what Oscar is really hiding from are the demons of his past.

Oscar's life hadn't always been this way. In 1950, Oscar Rodriguez-Jackson married the love of his life, a human being named Virginia. Mr. and Mrs. Rodriguez-Jackson went on to have 3 beautiful human daughters. 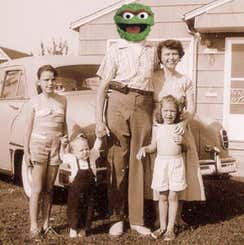 Oscar and Virginia raised their family in a small 2 bedroom home in Secaucus, New Jersey. By all accounts they had the perfect life. Oscar worked full-time as the friendly neighborhood Milk Man. 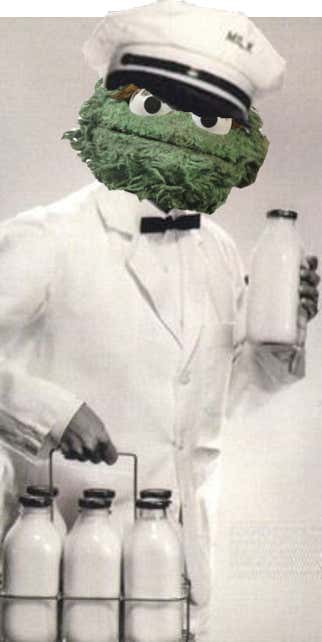 It was a humble life, but it was a good life. His children excelled in school. Virginia cooked them dinner every night. She washed clothes in large metal buckets and did all of the cute little hobbies women used to do back in the early 1900's to make them feel important. 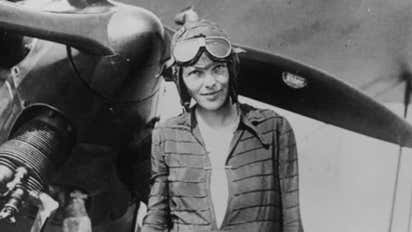 It wasn't until 1965 when things began turning south for the Rodriguez-Jacksons. After decades of prominence, the milk industry was about to meet its maker. That of course, was Gatorade. Gatorade was invented at Florida University. They called it Gator-ade (aid) because it aided the Florida Gators football team with hydration. Suddenly milk wasn't the only drink on the market anymore. Milk slowly began disappearing from the sidelines of college football games and was being replaced with Gatorade. Oscar's long-time customers were cancelling their milk subscriptions left and right. The milk man was old news. Nobody in Secaucus wanted to drink milk anymore. The Gatorade man was all the rage. 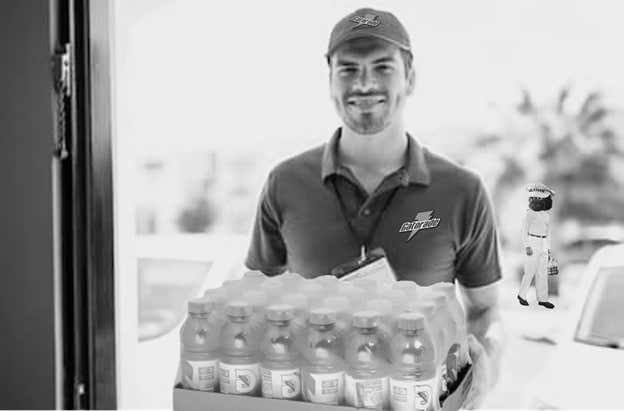 It wasn't long until Oscars gold digging bitch of a wife left him for the Gatorade man. Oscar was crushed and alone. He didn't know what to do. Being a devout Muslim, Oscar Rodriguez-Jackson decided this was the perfect time to clear his mind, and finally make the pilgrimage to Mecca that he had always dreamed about. 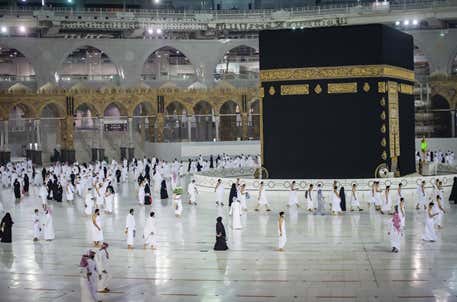 It was a great trip for Oscar. He gained clarity. He became closer to God (Allah). Oscar was finally feeling ready to get back to the United States and turn his life around. However, on his trip to the airport, Oscar shared a camel ride with a strapping young Muslim businessman. Unbeknownst to Oscar at the time, the man he was sharing a camel with was a young Sadaam Hussein. 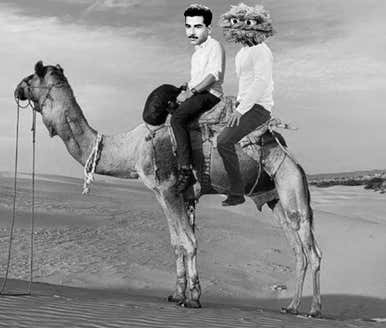 During the long camel ride to the airport, Oscar and Sadaam got to know each other. Oscar told him of his troubles with the milk industry in America. Sadaam told him of all the cool things a young Sadaam Hussein liked to do. Among these cool things was something called heroin. Sadaam was kind enough to share his needle with Oscar, and they enjoyed a super chill camel ride. Heroin was great. Oscar was instantly hooked. He couldn't believe he'd never tried it before. Suddenly all his problems with milk and being cucked by the Gatorade man weren't such a big deal anymore. Heroin was exactly what Oscar needed.

That's when Oscar had an idea. He could sell heroin back home to the good people of Secaucus. The only problem was that he could get into big trouble for doing so. Oscar was terrified of jail. He also wasn't sure if his friends and neighbors would willingly become drug addicts. Oscar then came up with a brilliant solution. He would secretly cut his milk with Sadaam's heroin. That way he could continue doing the job he loved, selling milk door-to-door, and nobody would even have to know that they were getting addicted to drugs. It was a win-win.

Oscar gave all the money he had to Sadaam Hussein in exchange for so much heroin, and he returned to the United States. First order of business: Oscar had to win his customers back. Oscar cut 1000 bottles of milk with a gram of heroin each. He left free bottles of "Oscar's New Milk" at the doorsteps of all his old clients. Gatorade was all the rage, but nobody was going to turn down free milk. 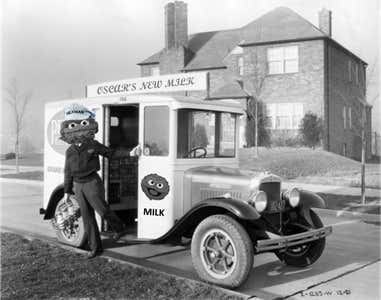 The next morning, a line formed at Oscar's doorstep that stretched a half-mile down the street. Oscar's heroin milk was a big hit!

That was the start of a crazy few years for Oscar Rodriguez-Jackson. He could barely keep up with the demand for his heroin milk. It was almost like the more milk he sold, the more people needed his milk. Meanwhile, his neighborhood had completely gone to shit. Everybody gave all the money they had to Oscar in exchange for his heroin milk. He was making money faster than he could spend it. Oscar began buying up all the real estate in Secaucus. As his friends and neighbors were foreclosing on their homes and filing for bankruptcy (due to heroin addiction), Oscar was kindly able to pay off their mortgages, gain ownership of their homes, and charge them rent to continue living there.

Oscar had become a man of means. He went to lavish parties in the Hamptons, took weekly trips to Atlantic City with Sheiks, and had a butler named Chives.

However, the high life was short lived for Oscar. He burned the candle at both ends. As his heroin milk business grew, so did Oscar's addiction. He began using heroin at a higher rate than he was selling it. It caused serious problems with his health both physically and mentally. He started being grumpy all of the time, and began lashing out at children when they tried to speak with him. The green fur that used to only cover his head now covered his entire body. His bank account started to dwindle. He invested the last of his fortune into his friends Cigarette Umbrella business. It was a terrible idea. The company went belly up. Oscar lost everything. 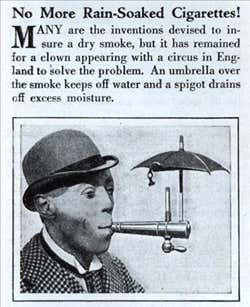 Rock bottom came one weekend when Oscars ex-wife Virginia went away to the Gatorade awards in Jacksonville with her new husband. She agreed to let Oscar watch the children while he was away. It had been a long time since Oscar was trusted with his children, so this was big for him. Virginia didn't know that his life had spiraled out of control. At least Oscar could try to be a good father. He decided to use the little money he had left to buy backstage passes to the circus for him and his daughters.

While Oscar and his children were backstage feeding seals to lions, the heroin withdrawals started to set in. Oscar was sick to his stomach. He had never been so miserable in his entire life. That's when he struck up a conversation with a sword swallower. Oscar asked the swallower what his trick for swallowing swords was. His trick was that he used a lot of heroin. Oscar asked if he could spare any heroin, but the swallower would not give him the drugs for free. That is when Oscar did the unthinkable and sold his daughters to the circus. Oscar left the circus that night with zero daughters, and a belly full of heroin.

He couldn't bare to live with himself. He couldn't even bring himself to return to this home in Secaucus. He just started walking. He walked and walked until he finally reached New York City. He had become a gross hideous monster. He hadn't showered in days. He was covered in nappy green fur. He had a bad attitude. He was trash. Like the trash that he was, Oscar crawled into a back alley trash can. The trash can was his home now.

For the last 50 years, Oscar was remained in that very trash can. Every day he wakes up and is harassed by kingergartners. Snuffleupagus makes passive aggressive comments about his eyebrows. Big Bird drags his ball sack across Oscar's face. The whole world hates him and wishes he would die. Oscar can leave if he wants, but deep down he knows this is what he deserves. A life of trash. He is no longer Oscar Rodriguez-Jackson. He is Oscar The Grouch.