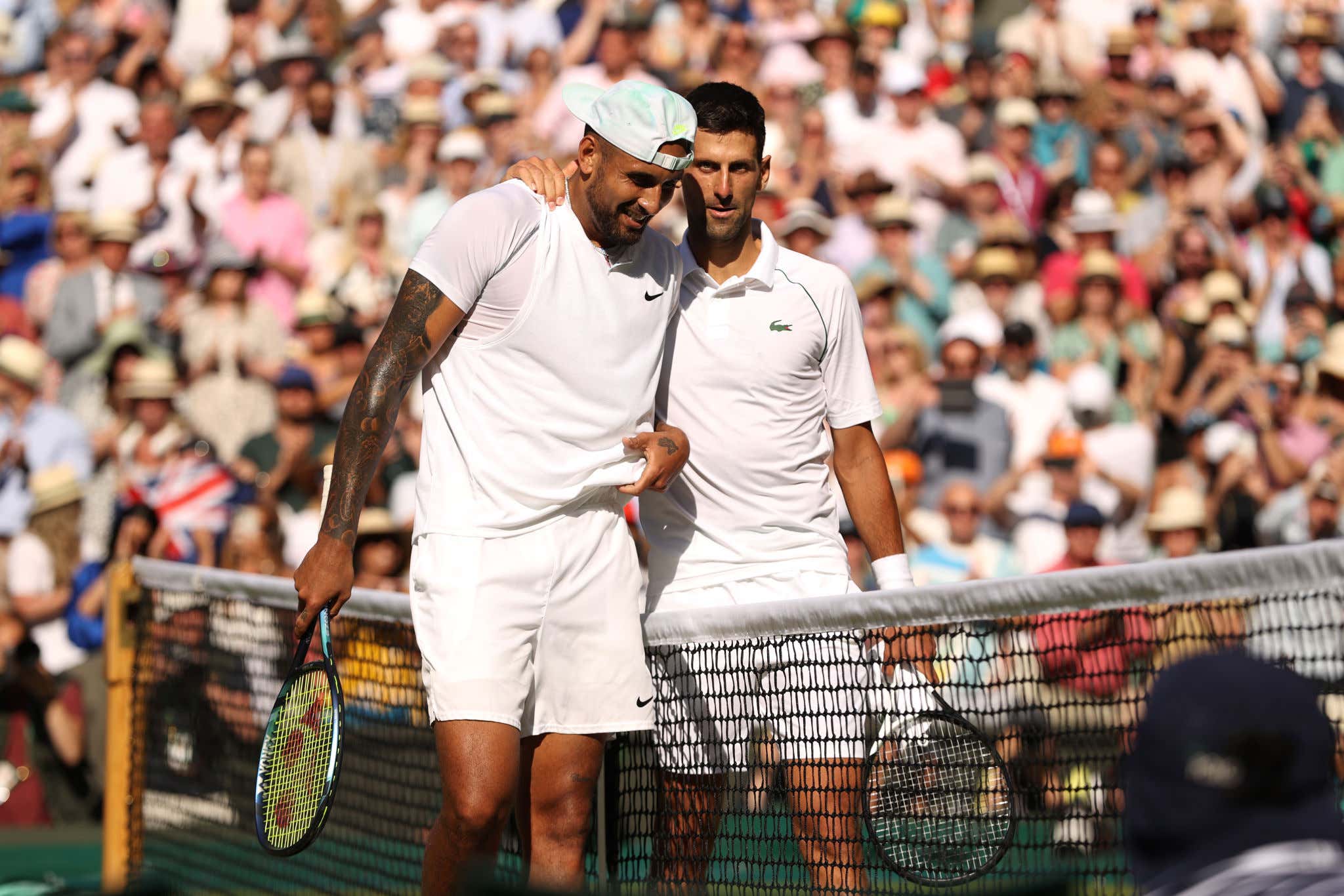 That was a flat-out really fun Wimbledon Final between Novak Djokovic and Nick Kyrgios. While it didn't exactly match the extracurricular fireworks that we saw in the Aussie's third round match vs. Tsitsipas, this one had a quality level to it from the first point to the last. At the end of the day Novak reigns supreme at Wimbledon, a place he hasn't lost since 2017. 21 grand slam titles now, passing Fed, and inching just behind Nadal at 22. Seven Wimbledon titles, now just one behind Federer's record of 8. The dude is really fucking good at tennis, and has a calming mentality in big moments that every athlete in the world wishes they possessed.

Nick came out of the gates hot and took the first set. All tournament it was sorta customary for Djokovic to drop the early frame as more of a feeling out process. The first set was imperative for Nick if he was going to have a chance here and credit to him he served great and kept the yelling to a minimum despite it being his first slam final ever.

After the first set Novak really locked in and began to get deeper and deeper into the Kyrgios service game despite the 130 mph rockets. Eventually the Aussie began to crack, found constantly yelling at his players box for whatever reason. In reality he's not actually mad at them, but more using them to let out his frustrations while playing the game's best. All that is par for the course in a Nick match, but I did appreciate the DMs I got asking why he was doing that. New people watching tennis is great!

The only true implosion Nick had really came in the 2nd set. He did however have a beauty of an opportunity to break back at 5-4 0-40, but Novak found that championship DNA to hold strong and even the match. Other than that Kyrgios really was on his A-game and played an extremely high level of tennis throughout. For most players in their first slam final they'd play probably close to 50-70% of what they're capable of in that moment, but for the most part NIck was at his usual level which I thought was really impressive. He did have his go with a fan who kept shouting during the match. Hilarious moment.

I know I'm talking a lot about Kyrgios who lost, but that's really cause there's not much more you can say about Djokovic. He's money at this tournament year in and year out. With a lightened field because of the Russian ban, it was his title to lose. He didn't lose it. All the credit to him here, he was lights out when he needed to be. When he plays next is the big question. There's still somehow a ban on non-US citizens who did not get the covid vaccine. Novak has been adamant he won't get it. I really don't understand how that's still a rule and I think it's bullshit, but if the rule stays he won't be playing the US circuit, including the US Open at the end of August. That sucks, because we probably don't see the best of the best play until the Aussie Open, assuming they relax their own rules. All of it is a mess as he tries to chase down Rafa. Hey maybe we see Fed? I'm praying.

For Nick I really hope he keeps this mentality moving forward, at least for a year or two.

You see what he can do when he cares about winning. It's electric. Maybe, just maybe he's found a love for it finally. When he's playing like this he's an incredible asset to the sport in attracting new eyeballs. Djokovic had a few nice words for Nick after the match.

Thanks to those who have read the tennis blogs, interacted on twitter and what not. It's a really fun sport to follow and bet on if you give it a shot. Cheers.

Anywho, here's some highlights from the match