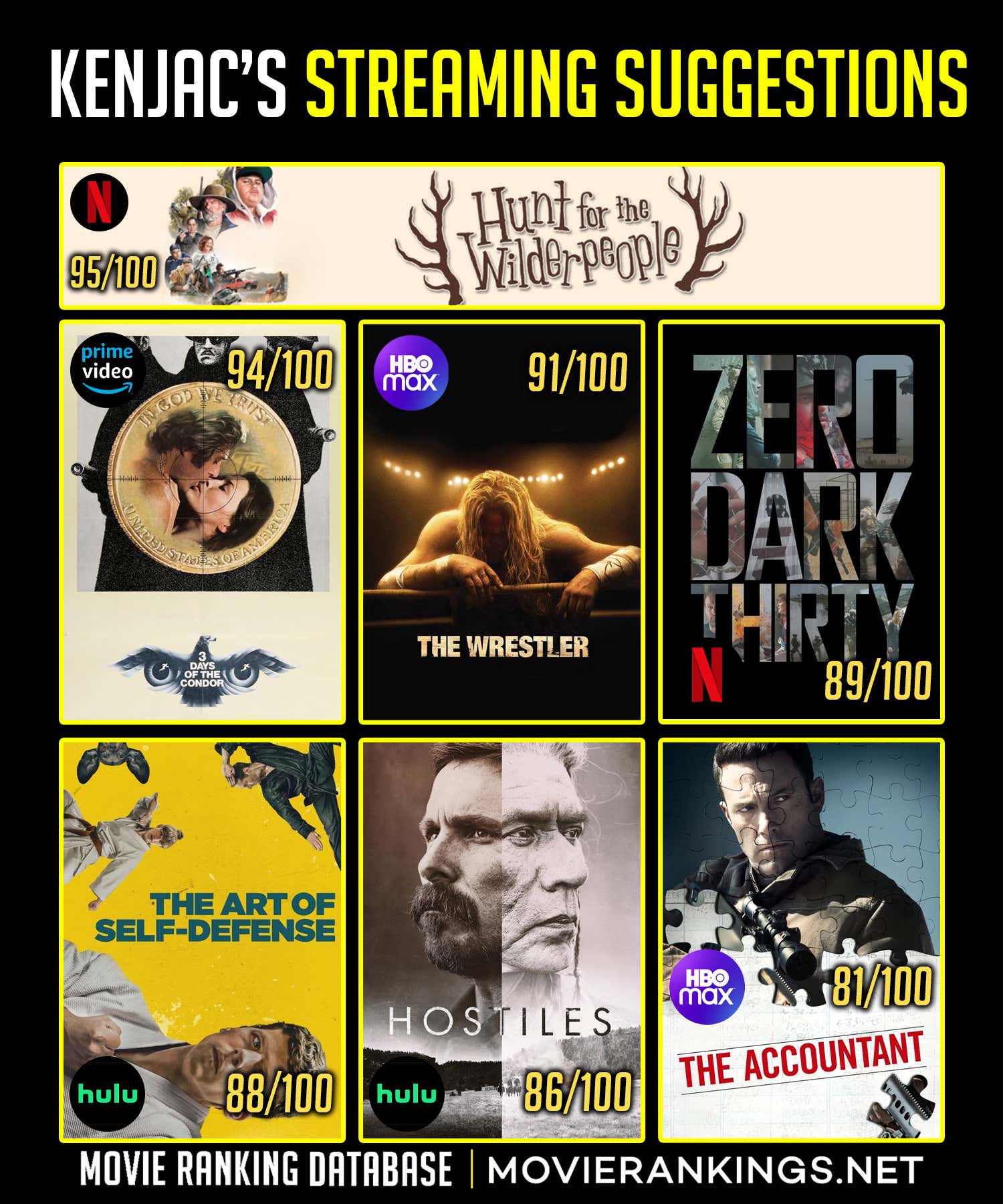 1. Hunt for the Wilderpeople

Ricky is a defiant young city kid who finds himself on the run with his cantankerous foster uncle in the wild New Zealand bush. A national manhunt ensues, and the two are forced to put aside their differences and work together to survive.

If you like Taika Waititi's bigger stuff like Thor Ragnarok or Jojo Rabbit, I think you should go back and check out this movie and 'Boy'. These smaller projects are where he really shines in my opinion.

2. Three Days of the Condor

This is an oldie but one of the best espionage movies ever made in my opinion. Robert Redford is amazing and Max von Sydow are a perfect duo and the movie really keeps you on the edge of your seat.

Aging wrestler Randy "The Ram" Robinson is long past his prime but still ready and rarin' to go on the pro-wrestling circuit. After a particularly brutal beating, however, Randy hangs up his tights, pursues a serious relationship with a long-in-the-tooth stripper, and tries to reconnect with his estranged daughter. But he can't resist the lure of the ring and readies himself for a comeback.

This can be a hard movie to watch sometimes but it is just so god damn good. Mickey Rourke is untouchably great as are most of the side characters.

Without a doubt, this is one of the greatest westerns ever made. It also serves as sort of a swan song for Clint Eastwood in the genre he basically defined.

A chronicle of the decade-long hunt for al-Qaeda terrorist leader Osama bin Laden after the September 2001 attacks, and his death at the hands of the Navy S.E.A.L. Team 6 in May, 2011.

I rewatched this earlier in the week and forgot how awesome it was. Not just for the raid on bin Laden's house, but for the build up of case-building and the incredible work by Jessica Chastain.

6. The Art of Self Defense

Casey is attacked at random on the street and enlists in a local dojo led by a charismatic and mysterious Sensei in an effort to learn how to defend himself. What he uncovers is a sinister world of fraternity, violence and hypermasculinity and a woman fighting for her place in it.It’s been a year of calm. Homelander’s subdued. Butcher works for the government, supervised by Hughie of all people. But both men itch to turn this peace and quiet into blood and bone. So when The Boys learn of a mysterious Anti-Supe weapon, it sends them crashing into the Seven, starting a war, and chasing the legend of the first Superhero: Soldier Boy.

This is a very underrated dark comedy that more people should watch. It has multiple laugh-out-loud moments as well as a bunch of OH SHIT ones.

As a math savant uncooks the books for a new client, the Treasury Department closes in on his activities and the body count starts to rise.

This is movie is such a conflicting watch because it has some great action/suspense and an interesting enough plot. It also features a laugh out loud dumb scene where Ben Affleck does an accounting montage where he just writes a bunch of numbers down and says a list of accounting terms out loud like  "depreciation….balance sheet…accounts receivable"