Fox News - Kanye West is getting into the car business.

The project will be headed up by footwear designer and longtime West collaborator, Steven Smith.

Details have not been released, but an announcement provided to Complex included an intriguing product tease.

The vehicle is called the Donda Foam Vehicle and is said to be conceptualized, designed, and manufactured in the United States.

The vehicle features a cab-forward design and a slab-sided passenger compartment with an extra long wheelbase and oversize "tweels".

Given West's close relationship with Elon Musk, who was at the release party for the "Donda 2" album in February, it has been speculated the vehicle could be built using Tesla technology; however, there is no official confirmation that is the case and neither Musk nor Tesla has yet commented on the vehicle.

I can give a damn 'bout your car, but then I would be
If it was considered a classic before the drastic change
In production when cars were metal instead of plastic
Value, is what I'm talkin' 'bout, take two of these and walk it out
You'll be the reason they chalk it out, you can't be the king of the parking lot
Forever, not saying I'm the best but 'til they find something better - Andre 3000 "Walk It Out Remix"

The future is now people.

Get on board or get the fuck off the rails. Because a freight train is coming through. And its built out of foam and riding on "tweels".

What are tweels you ask?

Fun fact: A tweel is an airless tire and wheel combination that uses flexible spokes instead of an air-filled chamber and can continue to work when punctured. 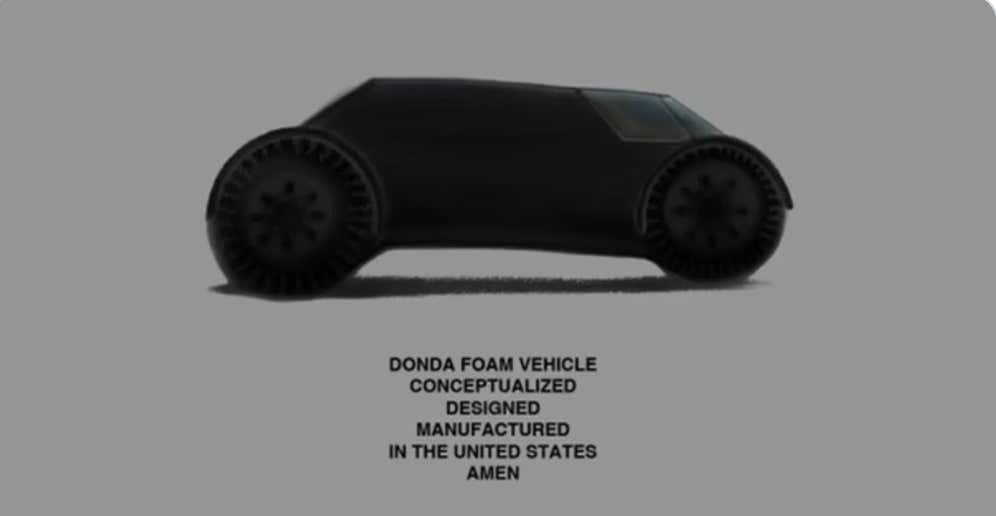 If you guys take a look at that picture and say to yourself "that looks like shit" you're lying to yourself.

What it looks like is one of those Playmobil cars those pussies in England grew up playing with instead of Legos, that were always in those fancy-schmancy toy magazines and Airmall on the planes. They looked cool, mostly because they were different, but they didn't make economical sense because you could only order them abroad.

Who cares if foam holds up in NHTSA and IIHS crash safety ratings? (it wont, its foam) the thing looks sick.

Who cares if the body's not heavy enough to endure speeds over 50 mph without flying off the road?

How do you get into it since it looks seamless and like there are no doors on it? Who cares. Small potatoes.

What does it run on? Gas? Electricity? Those foam peanuts that only come in packages your nana ships you or that come from Asia? Again, who fucking cares?

We're talking about stuntin, 24/7. If you're not, then what's the point? Like the incomparable Will Smith rapped,

"Leanin' to the side but you can't speed through
Two miles an hour so everybody sees you".

5 dollars in the gas tank, 50 k on the tires and sound system.

You know how we roll-

p.s. - by now everybody knows I have an unhealthy obsession with Kanye West. Whatever. Well that doesn't get in the way of me calling it down the middle, always, all ways, all days. I saw this today and grimaced…

Yahoo News -  A Yeezy fan will be forced to change the menu and logo of their restaurant, which is reportedly heavily influenced by the rapper.

Hypebeast reports an Australian burger restaurant owned by Mark Elkhouri has allegedly been served a cease and desist letter from Kanye West.

The restaurant in question is College Dropout Burgers, which currently sports menu items including the “Golddigger” fried chicken sandwich, “Good Morning” breakfast sandwich, and “Cheezus” burger. Despite finding success fueled by Ye’s essence, the restaurant has allegedly been forced to rebrand.

The news follows just one week after the owner took to Instagram, sharing screenshots of his story views.

“What is happening here? I must have ‘found God,’ because Kanye West has been deep in our stories. Over 10 story views now!! Ye – ‘call me, bruh. You still ain’t called me? Ye, I know you got killers. Please don’t send them at my head. Please call me,’” Elkhouri wrote on Instagram.

Did they at least send him a gift card to the Yeezy online store?

This place wasn't even in Chicago. Or Hollywood.

It was in Australia.

Be glad your celebrity is so large over there that you have proprietors honoring you by naming the place they make a livelihood after you. Think of what your mom would say. Not what your scumbag lawyers do.