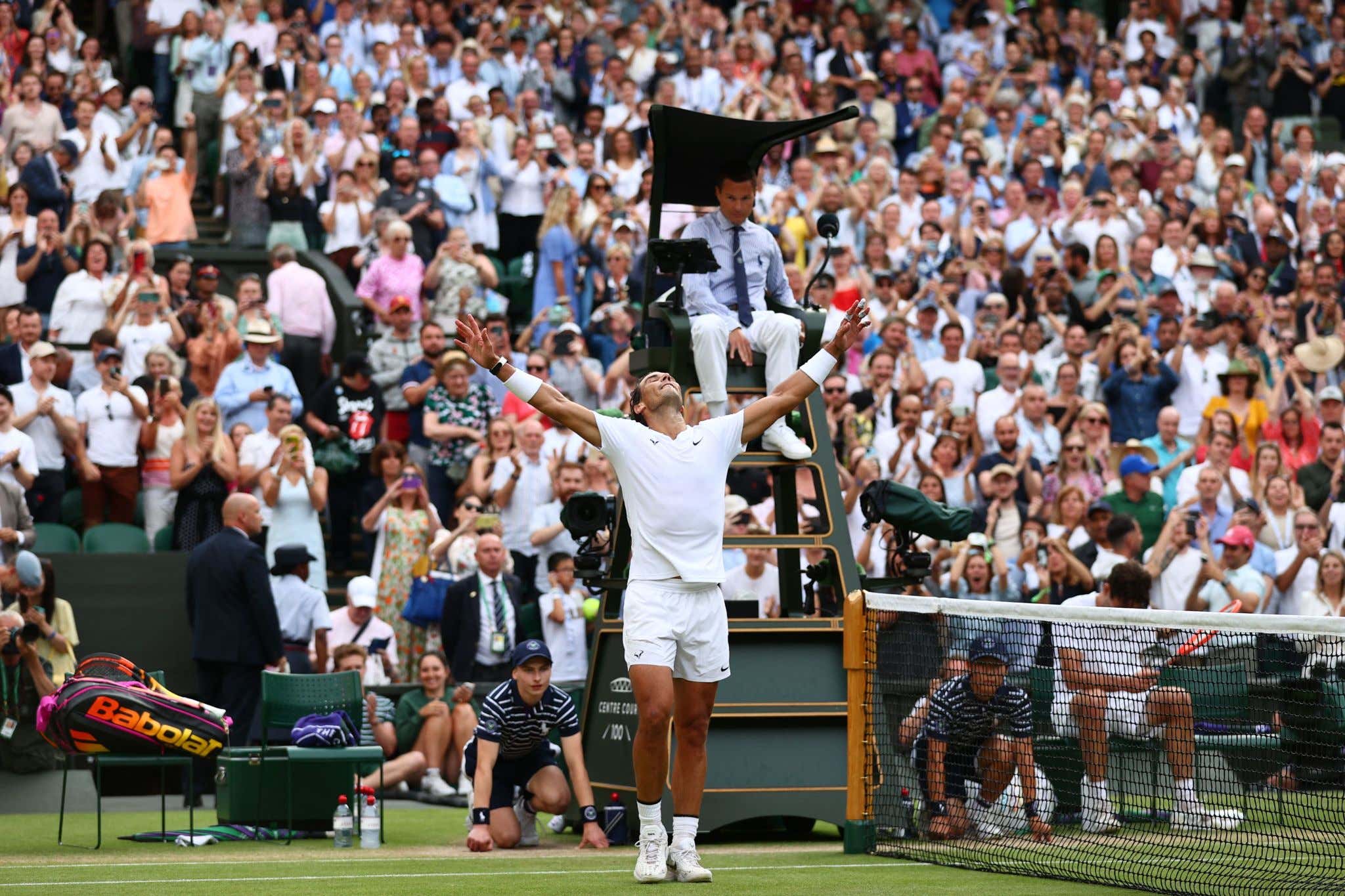 Rafa Nadal is inevitable. That's really all you can say after that 4 hour 20 min epic match on Centre Court at Wimbledon between Rafa and American Taylor Fritz. It's one thing to break Nadal, Djokovic, or Federer. It's another to go up a set or two on them. It's a whole different ball game to try and finish them off and actually knock 'em out of a grand slam. Taylor Fritz went up two sets to one today, but couldn't finish the job. Novak yesterday was down two sets to love and came back to win. They're just different animals.

This match experienced swing after swing and I'll try to quickly explain that here. Rafa broke immediately out of the gates and raced to an early lead only to see Fritz break back and win the opening frame. That's when Fritz really began to take control and look like he was going to run away with this one. Rafa's abdominal muscle really started to give him issues and forced him to take a medical timeout, leaving the court with the trainer. It honestly looked like he wasn't even going to be able to finish the set. Some thought his dad was motioning for him to retire from the match here.

Nadal being the warrior/lunatic he is returned with some tape on his abs and the match shifted once again, with Rafa stealing the 2nd set and leveling the match. Fritz managed to regroup in the 3rd to go up 2 sets to 1, leaving him just one set away from the semis. It unfortunately wasn't meant to be.

Nadal's "never say die" attitude willed him to level the match and send it to a deciding, final set. Still, despite going down an early break, Fritz broke back in the 5th to even it up at 4 games a piece. Both would hold twice more to force a deciding match tiebreak, first to 10 win by two. Nadal would go on to work Fritz, taking it to the American who got tight in the worst of moments. I'd post more highlights but Wimbledon barely tweets stuff out and takes down all videos that aren't from their accounts. Figure it out.

I'm gutted for Taylor Fritz. To be that close to a career moment only for it to slip away like that? Fucking brutal. The strides Fritz has made in is game over the last few years have been incredible. What's really missing is a net game. You could see it in the big moments he was extremely hesitant to come forward and put away points. Nadal, Djokovic, and Federer will expose that kind of weakness in the biggest moments like clockwork.

Now we get Kyrgios-Nadal, eight years removed from the Aussie bursting onto the scene and knocking out Rafa in the 4th round. They faced each other again in 2019, with Nadal winning in four. Kyrgios recently admitted to his agent having to pull him out of a bar at 4am the morning before that match. At the time he didn't give a shit about winning matches, but what we have now is a Kyrgios we have never seen before. That match on Friday is going to be an absolute blockbuster. We'll see what kind of shape Rafa is in because any limitations will doom him likely. He knows that too with the way Nick is playing. We shall see.

P.S. I swear the ESPN camera guy was more fixated on Fritz's girlfriend Morgan Riddle than the actual match in crunch time.

Morgan is awesome for tennis, constantly trying to grow the sport on Tiktok and IG. Clearly she's been a great influence on Taylor as well. Here's to the American continuing to get better and better. Overall this way a very encouraging grand slam for American men and I'm very much here for it after a long time of being irrelevant.