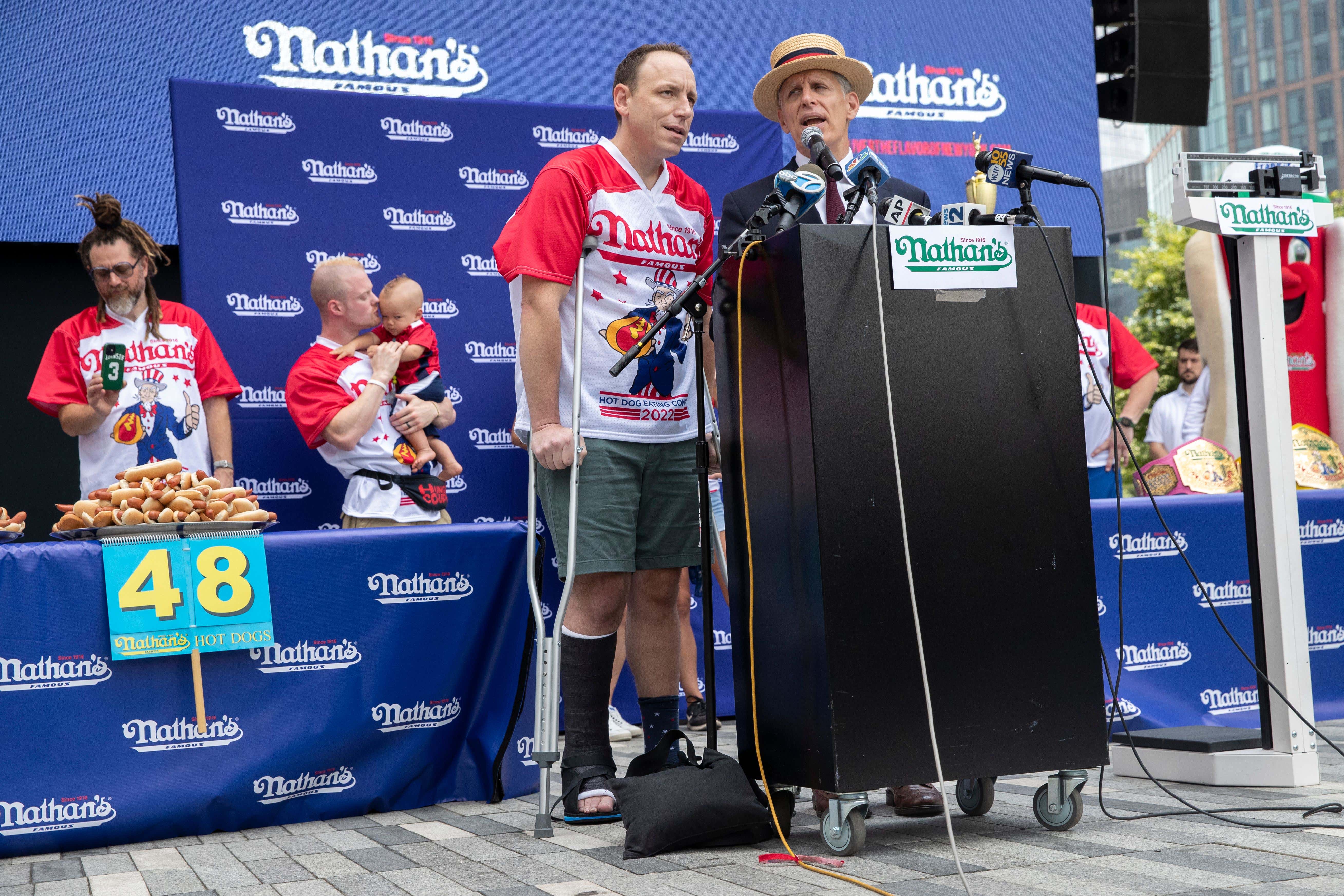 NY Post- The world’s greatest eater will limp bravely into battle in the sport’s premiere event on Monday, July 4th.  Joey Chestnut shocked the competitive-eating community on Friday when he hobbled into Hudson Yards in New York City on crutches during the official weigh-in before the 2022 Nathan’s Famous Hot Dog Eating Contest — a 4th of July tradition on Coney Island.

“I’m gonna eat like a madman,” the world’s top-ranked eater told Fox News Digital before weighing in at 235 pounds.  “It’s a ruptured tendon,” he explained of his injury.

He declined to specify the cause of his leg injury, saying only that “life happened.”

I had to throw this story up on the blog for anybody that missed this news from the weigh in a couple of days ago because I know I sure as hell did during the holiday weekend chaos. Joey Chestnut is not only looking to win his 16th hot dog eating contest but he is looking to have his very own injury playoff game associated with his legend like Michael Jordan, Willis Reed, and Michael Jordan.

I've been scouring the internet for the hot dog eating contest version of those Fantasy Football Injury Doctors that diagnose everything by the way a guy walks along with whatever they learned in whatever med school they may or may not have gone to. But there doesn't appear to be anyone that can diagnose what a ruptured tendon means for throwing dozens of pigs lips and assholes down your throat. Standing is paramount for competitive eating so you have a straight line to your digestive system.

I was pretty nervous about all this until the champ weighed in during the weigh in, which is hilarious in itself.

“I’m not eating with my leg,” Chestnut told fans.

I'm not a doctor nor do I play one on the internet but that checks out.

In case that doesn't put your American soul at ease, this should.

What a fucking stat. Let's go Joseph Chestnut! Keep that mustard belt in America! Then keep the red, white, and blue juju going by betting The Big Yabo on the Barstool Sportsbook!

P.S. I am choosing to believe that motherfucker Kobiyashi decided to Nancy Kerrigan his rival to avenge Chestnut wiping him from the hot dog eating record books and relevance. Orrrrr Chestnut broke his own leg to even the playing field before dusting the competition. Yeah we'll go with that and not the other excuses "life happened" could mean.