^^^We did a podcast with Mintzy, Smitty, and myself. Talking Ole Miss and WSOP. Really fun episode. Please enjoy!

I've been in Vegas for a week now, living out my dream playing WSOP events. I've always wanted to grind the full series, playing all the no limit events, but obviously with a job, limited bankroll, and limited poker skills, that dream has never turned into a reality. Until this year...sorta.

Instead of playing the full series, I decided I'd come out and play 2 weeks, including the Main. I've put a lot of time studying poker since I punted last year's Main and couldn't wait to get out here to play and see how much I've improved. And buddy...I have IMPROVED. 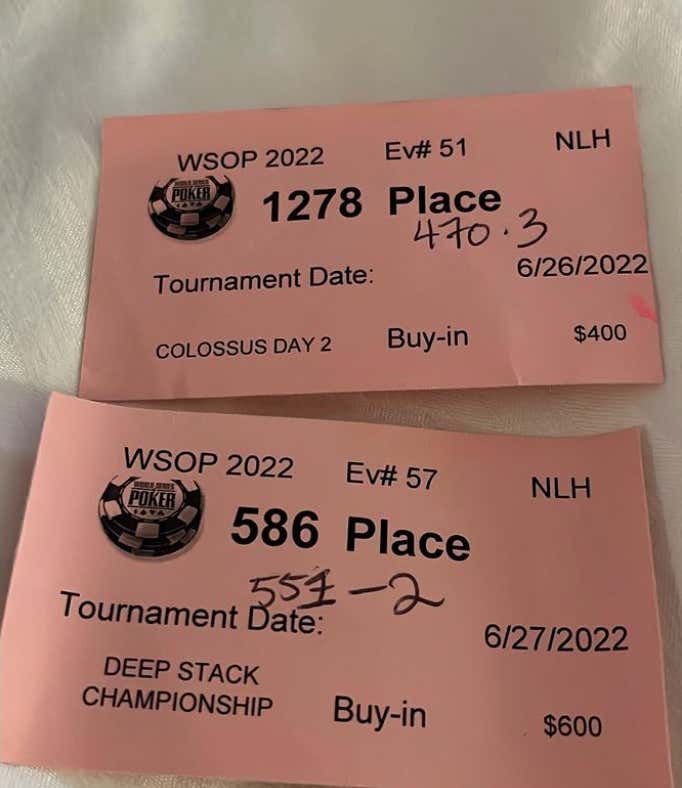 To be completely honest, I'm not running great at all. Until the Turbo yesterday, I was losing basically every flip and 60/40. Didn't matter which side of the flip I was on (flip meaning all the money goes in preflop), I lost. In the first 3 bullets of the $400 I lost QQ to AK, AK to 66, and 66 to AK. My bustout hand was losing A8cc to KQ.

In the $600 I ran up a big stack early on day 2 and then lost QQ to KJ and busted in a really stupid hand, when the small blind ripped 25bb into my big blind and I called with AKhh, flopped 2 hearts, and didn't get there. To win these big field tournaments you HAVE to win your key flips, there's no two ways about it. You can play lights out poker, but if your pocket pair loses to AK, or your AK doesn't get there vs 33, it's showers.

Yesterday in the $1500 Turbo Bounty, I started out super hot, but even still I lost QQ to 87. But then I got AKdd in vs KK and hit an ace, and it was off to the races…until….

Feels bad, man. I feel like if I hold there I am in amazing shape to make a deep run. But alas, just wasn't meant to be.

I've cashed twice and profited in a 3rd WSOP event out of 4 played, but it doesn't feel good enough. Sometimes you can go 0/30 playing WSOP events because the variance is so high, so even cashing them makes me feel good, but still..I'm not content. Cashing used to feel great, now a min-cash does nothing for me. I need more validation. I need to prove to not just myself, but all the haters on the internet, that I am actually a pretty good tournament poker player. That I can win (and hopefully win big!) at this game. Sure I've made some live final tables before, sure I've now cashed twice in this WSOP, but it isn't enough. I need a big breakthrough score. I need it. I crave it. I know I'm good enough…but I also know how much better I can get.

After this year's Main, I am going to get SO MUCH BETTER at poker it's going to blow your socks off. I'm going to work during the day and study poker at night. Sorry all the bitches of NYC, Natey Boy can't take you for a ride on Space Mountain tonight, he has some preflop charts to study.

Today I will be firing the $3k freezeout, which will be the toughest event I play this Summer. I wasn't originally going to play it, but I feel great about my game and I got those 4 bounties yesterday, so I sorta have to play it. Can't come out to the desert to be a nit. Gotta have heart, miles and miles of heart.

I've been posting chip stacks and hands and updating pretty consistently on the Cracking Aces IG.Really appreciate everyone that has sent good luck messages and followed me along the ups and downs and swings of these tournaments. Been a real blast and the support has been unreal. Hope to have some fun updates from today's $3k, let's get it!!!