The White Sox completely fucking stink right now. It's a flawed roster. No question about that. We just watched the Orioles take 3 of 4 from the Sox basically by playing outstanding fundamental defense. That's more or less impossible with this current White Sox roster as you have *checks notes* Vaughn, Burger, Abreu, Sheets and soon to be Eloy and Grandal all on the same roster. Theoretically the offense should cook with those guys, but the dog shit fundamental baseball that we've seen time and time again is to be expected considering all of those guys should most likely be relegated to DH with spot starts at 1B on a team that is actually looking to win a World Series.

Egg on my face. I thought their offense, starting pitching and bullpen would be enough to cruise to a division title, but I was way, way wrong. The team needs a serious shake up and I have not the slightest clue how they're going to do that.

So not everything falls on Tony LaRussa. I think it starts with the head honcho, Jerry Reinsdorf, but that is opinion and up for debate.  What's not up for debate is this unacceptable play through 70 or whatever games falls on everyone, from Jerry through Rick Hahn on down through the 26th man on the roster.

But let's focus on Tony LaRussa and his post game from lat night. Here's the video that has White Sox fans up in arms this morning:

I'll start by saying it's difficult to speak off the cuff for a lot of people. I know this because I have microphones shoved in my face about 24 hours a day and if I say one dumb thing the entire internet loses their shit and dissects whatever I said like a bullfrog in 8th grade science class. So I don't take *everything* TLR says to heart in these pressers. There's coach speak, media fluffing, all that involved any time a coach says something in front of a camera.

But TLR has been so, so bad in his pressers this years he's lost all benefit of the doubt for me. He snapped on Scott Merkin a few weeks back when he decided to walk Trea Turner in a 1-2 count and that was the final straw. I'm starting to take him at his word from now on.

The big debate from last night was Leury Garcia not being pinch hit for in the 6th inning when the Sox were down 2-0 with runners on 2nd and 3rd (I think... might have been 1st and 2nd). Every time the Sox need a big hit in a big spot, he seems to come up. This guy with these numbers:

He's the worst player in baseball. He plays 6-7 defensive positions and does it poorly too. The K rate is a little above average I guess. This guy was given a 3 year fucking deal last winter for some reason. HOW. How is that possible. Whoever's idea that was should be sent to prison for murdering White Sox fans souls.

I will defend TLR on one thing though: most of the time, you shouldn't be results oriented in baseball. I said I liked Moncada's approach last night on Twitter and he had 3 Ks and 4 plate appearances. His passes were as I described "healthy"… he just didn't connect on any pitches and hitting baseballs is difficult. The swings were much better though.

But Moncada at least has a (distant at this point) history of being an offensive force. Not a mediocre player like Leury some of his years, a force. This is the guy Tony liked to be at bat in a clutch situation last night aside from Vaughn or Burger: 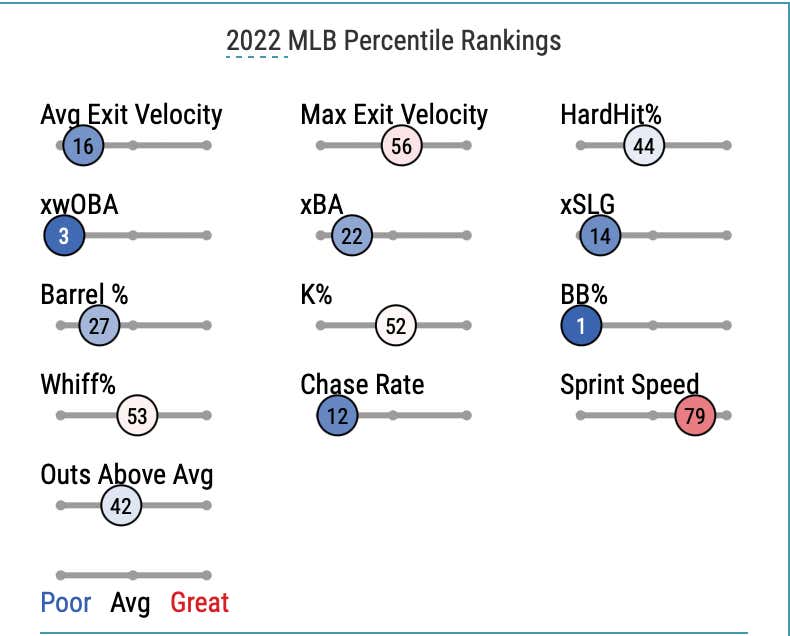 Did he have a few decent at bats earlier in the game? Sure. BUT LAW OF FUCKING AVERAGES TONY. He's NOT gonna keep stringing together good at bats because he's a shitty hitter. He has always been a shitty hitter. In fact, he's the shittiest hitter in baseball this year. I haven't looked up numbers to prove that, but I've seen him hit enough where it's a statistical impossibility for anyone with equal or more plate appearances as him to be a worse offensive player.

It blows my fucking mind. Oh and on the note of Andrew Vaughn… I didn't hate he got the day off yesterday. He had scuffled a little bit for 2-3 games after shitting on the ball constantly YTD. But Tony said he was unavailable last night because he was "sore". Two points on this:

- Andrew Vaughn is 24 and plays fucking baseball. Not football, or hockey, or any other physically demanding sport. He can suck it up for 1-2 plate appearances and sit in LF if it helps the team win the game ESPECIALLY when the team keeps digging itself into a deeper hole in the division

- If TLR was really hellbent on giving Vaughn the night off for a mental reset against a stud RHP in Ohtani, that's fine. But then JAKE FUCKING BURGER IS SITTING ON THE BENCH. Pinch hit him for Leury. Or Hasely. Or literally anyone else with a pulse. Give goddamn McEwing a stick, he could go up there and more than likely provide an equal result.

It's mind boggling how many times TLR has been quoted as saving a pinch hitter for later in the game, or saving relief pitching when they're down 1-2 runs and opts for pitching their bums in the front end of the pen like Ruiz, and as a whole just rolled the dice on letting shitty players get lucky instead of giving better players the opportunity in dire spots.

TLR was billed as a genius baseball mind that would take the White Sox to the top. He has been the polar opposite of that. Some random dude on Twitter DMs me a running tally he's compiled of games it can be argued TLR was the MAIN reason the team lost… that tally is at TWELVE (12!!!). It's unbelievable. He's a hall of famer and deservedly so, but the game has passed him by. It's a flawed roster and he makes it worse instead of making it better as a tactical master like he's been billed as.

It's brutal. Hopefully this is the last year we gotta deal with this shit show.

Check it out all on Red Line Radio this week.

Subscribe to Red Line Radio on iTunes and elsewhere: