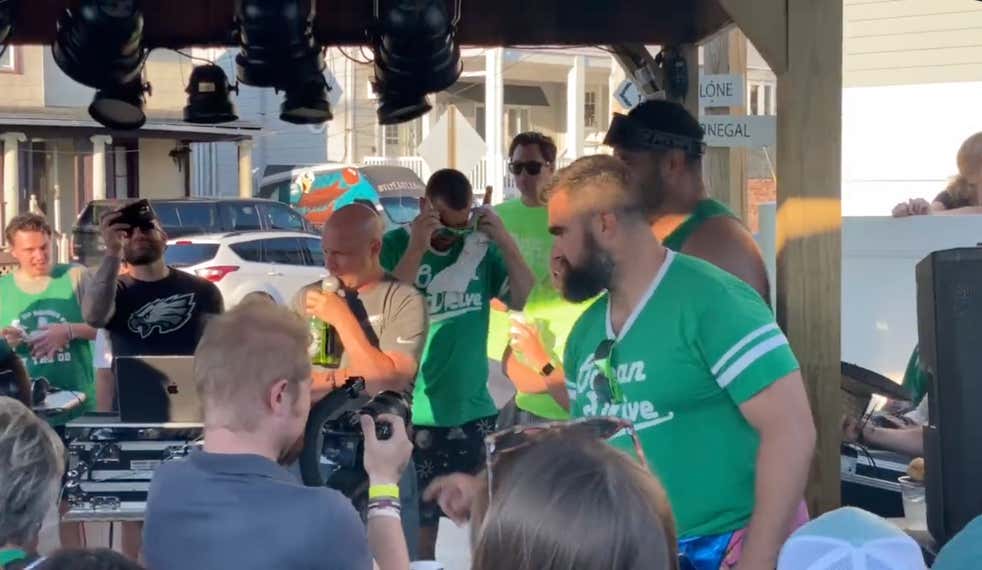 I would argue that the most magical place on Earth is the OD on a beautiful summer day. You spend your morning on the beach, pop on over to grab yourself a sandwich from McGowans for lunch, walk over to the OD and proceed to have the most kick ass time imaginable. Couple vodka lemonades later and you have no idea where the rest of your night is about to take you. Not a care in the world, exactly how it should be.

Then you add Philadelphia Eagles Jason Kelce and Jordan Mailata to the mix, and you've got all the ingredients for the best day ever. I'd say that Kelce is already a lock for the Pro Football Hall of Fame at this point, and Jordan Mailata is looking like he could have the potential to put up a legendary career. But as far as getting after it goes? The fellas are both a couple of first ballot hall of fame dudes. Oh, and I guess Travis Kelce was there too.

By the way, I love Dallas Goedert and everything but nobody looks happier to be wearing green than Travis Kelce was at the OD. I have to imagine if he just stays a few more days in Sea Isle that it'll fall under common law that he becomes a member of the Eagles. Travis Kelce, AJ Brown, DeVonta Smith. Seems like a quality arsenal for Jalen Hurts to work with. Make it happen, Howie. Make it happen, Sea Isle. Don't let him leave.

Either way, it's moments like these that I get the most optimistic about the Birds this season. The vibes are simply too immaculate for this team to not find themselves back in the mix. NFC East champs. Book it.

P.S. -- We gotta talk about this poor fella's shameful performance in flip cup.

I fully believe in "if you ain't cheating, you ain't trying". But for the love of god, brother, at least be a little more subtle about it. You've got a couple of Super Bowl champs in the building. You don't think that everybody and their mother is going to have their phone out filming everything that goes on here? There's no way you're getting away with that move with all those cameras capturing everything in HD. Tough game awareness from the young man. Have to be better.