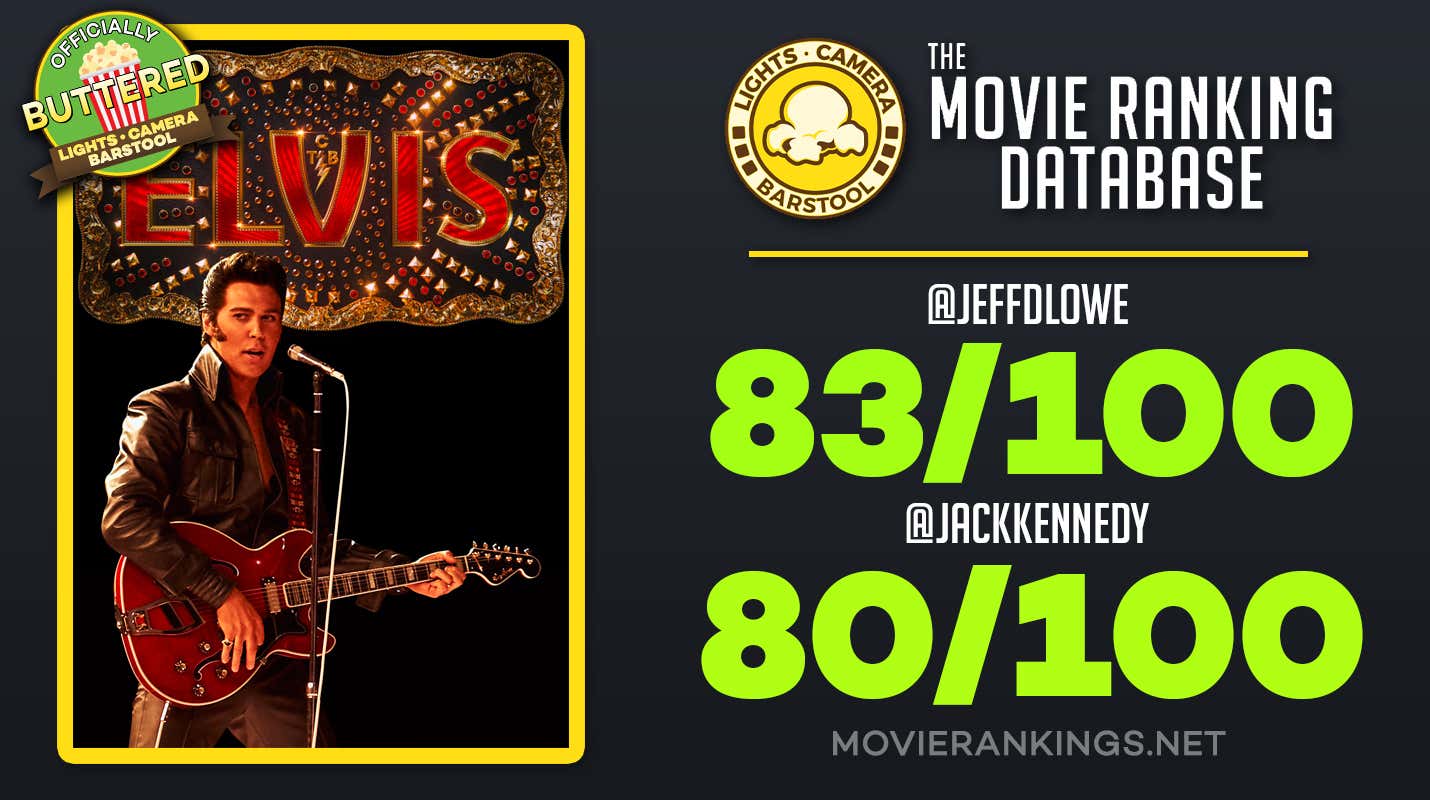 The life story of Elvis Presley as seen through the complicated relationship with his enigmatic manager, Colonel Tom Parker. (via MovieRankings.net)

JeffDLowe (83/100): I need to preface my review of 'Elvis' with this state: I love Baz Luhrmann movies and his style of directing, from 'Romeo + Juliet' to 'Moulin Rouge!' With that said, he does have the ability to release a dud, much like 'The Great Gatsby'. There was no guarantee I'd like this movie… but let me tell you what, I did!

While it may be exhausting at times, the chaos that is a Baz Luhrmann movie works quite well thanks in large part to a show-stopping performance by Austin Butler as the titular character in 'Elvis'. Unfortunately, the movie can't quite reach a level of greatness due to a bizarre, and at times revolting, performance from Tom Hanks in a supporting role.

The movie dazzles in terms of visuals, which shouldn't be a shock. Even folks who dislike Baz's style have to admit that his movies look good. That is no different when it comes to 'Elvis', which is easily one of the best-looking movies of 2022. As I mentioned above, the backbone of the movie is the fantastic performance by Austin Butler as Elvis. He got lost in the role (literally, he still sounds like him almost two years after filming) and I now see Austin Butler in my head when I think about a young Elvis. Throughout the filming, he actually performed the music and the performance was flawlessly fluid and captivating.

As for the bad, it's a pretty easy one: Tom Hanks.

I have no clue why he was cast in this role. It's just Tom Hanks in an obvious fat suit doing a bad accent. The thing that saves the performance (a little), and the movie, is that it is a Baz Luhrmann movie. The absurdity that is his style, covers up the atrocity that is Hanks' performance in the role.

Folks who also don't enjoy the Baz style might also find themselves hating the beginning of the movie. It's frantic, fast-paced, and, for the haters, likely a little vomit-inducing in terms of speed of storytelling.

Again, I can't stress enough that I do really enjoy Baz Luhrmann's movies. If you don't care for his style or artistic vision, then you'll likely despise 'Elvis'. But I do think Luhrmann's artistry is on display in a really fun and engaging way that helps buck the trend of a normal true story biopic movie.

KenJac (80/100): The first act is PUTRID but the movie gets better in every second after that. It gets progressively less Baz Lurhmann-ey as it goes which directly correlates with the quality jump IMO. Butler was great but it was still bloated and needed 200% less Tom Hanks

--
The movie is Officially Buttered, and I am excited to see if people agree with us. You can head to Lights Camera Barstool right here to listen to our latest episode where we will discuss it on our new episode.