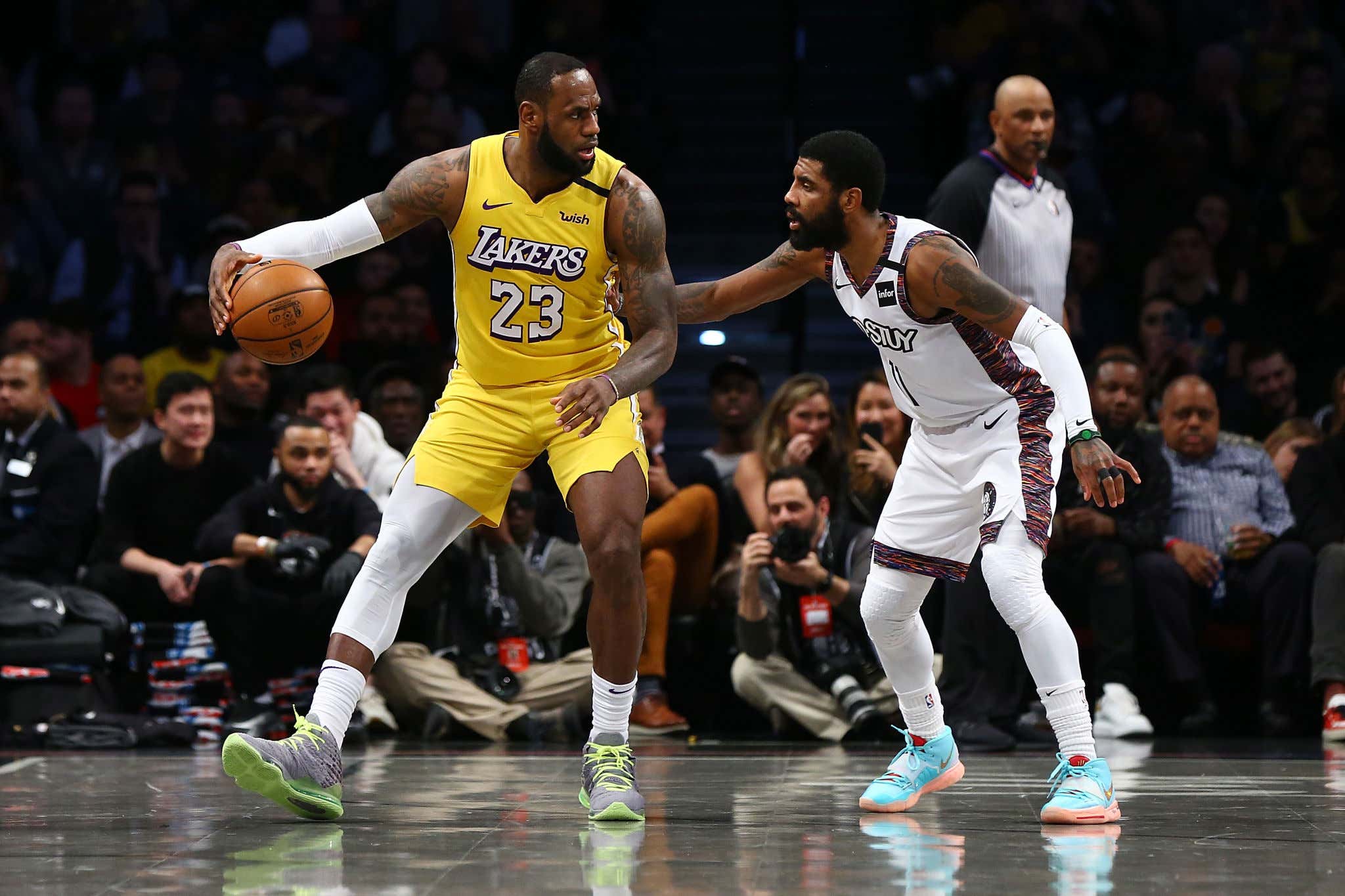 In today's media/internet/TV world, it's about giving takes. Everyone needs to give a take or have an opinion on literally anything and everything. The hotter the better is how it usually works. It's exhausting. Sometimes though you come across a take so outrageous it makes you spit out your coffee that you were actually drinking. Sometimes it's so outrageous you end up getting "ratio'd" as the kids say. Well when I woke up Monday morning and saw this bad boy, I legit thought it was a troll fake account

There are two ways Irving is still on this team next season: Either he picks up his option or he signs a new multi-year contract with Brooklyn that is shorter than what he’s seeking. If Irving doesn’t want to do that, the Nets are under no obligation — none — to trade him where he wants to go. If he really wants to play with LeBron again and move to L.A., go for the midlevel. Prove basketball and winning are the main things. It is probably the only thing Irving could do to save his reputation after four solid years of destroying it.

Lol, OK LeBron. I mean what the hell did we all just read? Kyrie could salvage his reputation with NBA fans by….giving up $30M and joining the Lakers/LeBron?

Am I still on planet earth?

3. Superteams (as long as it's not happening on their favorite team)

So somehow combining all those things are going to make people….like Kyrie? I guess on some level I understand what Joe Vardon is saying. Kyrie making it clear that winning is the most important thing and maybe being on his best behavior is a way to rebuild his reputation. Well, then why doesn't he just do that in BKN? He can sign a team friendly deal and do the exact same thing. He can opt into his player option this year and do the same exact thing.

What non Laker fan is sitting around thinking

"You know who could really use a break? The Lakers and LeBron. It's about time they caught some breaks and things went their way"

Zero. Not a single person. I just cannot understand how this is a real, logical take. The Lakers are one of the most hated franchises in the NBA's history by anyone who isn't a Lakers fan. Every year we see that map of most hated NBA teams and 85% of the country chooses the Lakers. I feel pretty confident that people would most certainly not do a complete 180 of Kyrie if he decided to team back up with LeBron and form a superteam in LA. If anything, NBA fans would be hoping he would burn that franchise to the ground like he's tried to do everywhere else.

That's why I can't help but think LeBron/Klutch are involved here. Joe Vardon is a CLE guy that dates back to the LeBron days. There's no way this is a real thought. This is absolutely LeBron trying to lay the groundwork for a move like that. On that level, I respect it. Listen, you have to get creative in terms of tampering in 2022. Everyone does it, it's just a matter of who can be more successful once the free agency period opens. Kyrie has to make a decision on his player option by Wednesday June 29th. This "angle" comes out on Monday June 27th. I'm sure that's all a coincidence!

I know it's only Monday, but this might take the cake for the most outrageous take we'll get this week. It's just so insane to the point where I still can't really believe it's real. Just look at what happened with Anthony Davis! Did his reputation take a turn for the better when he pulled all that shit in New Orleans so he could go to LA and pair with LeBron? Of course not! So why on earth would that happen with Kyrie? I'm pretty sure fans will not care about him taking a $30M paycut when he could just decide to stop being such a disaster for his current organization. Why is that off the table? If he wants to fix his reputation, how about stop quitting on your current franchise?

Nope. That's a terrible idea. The true path is teaming up with LeBron. Read a book for me one time.