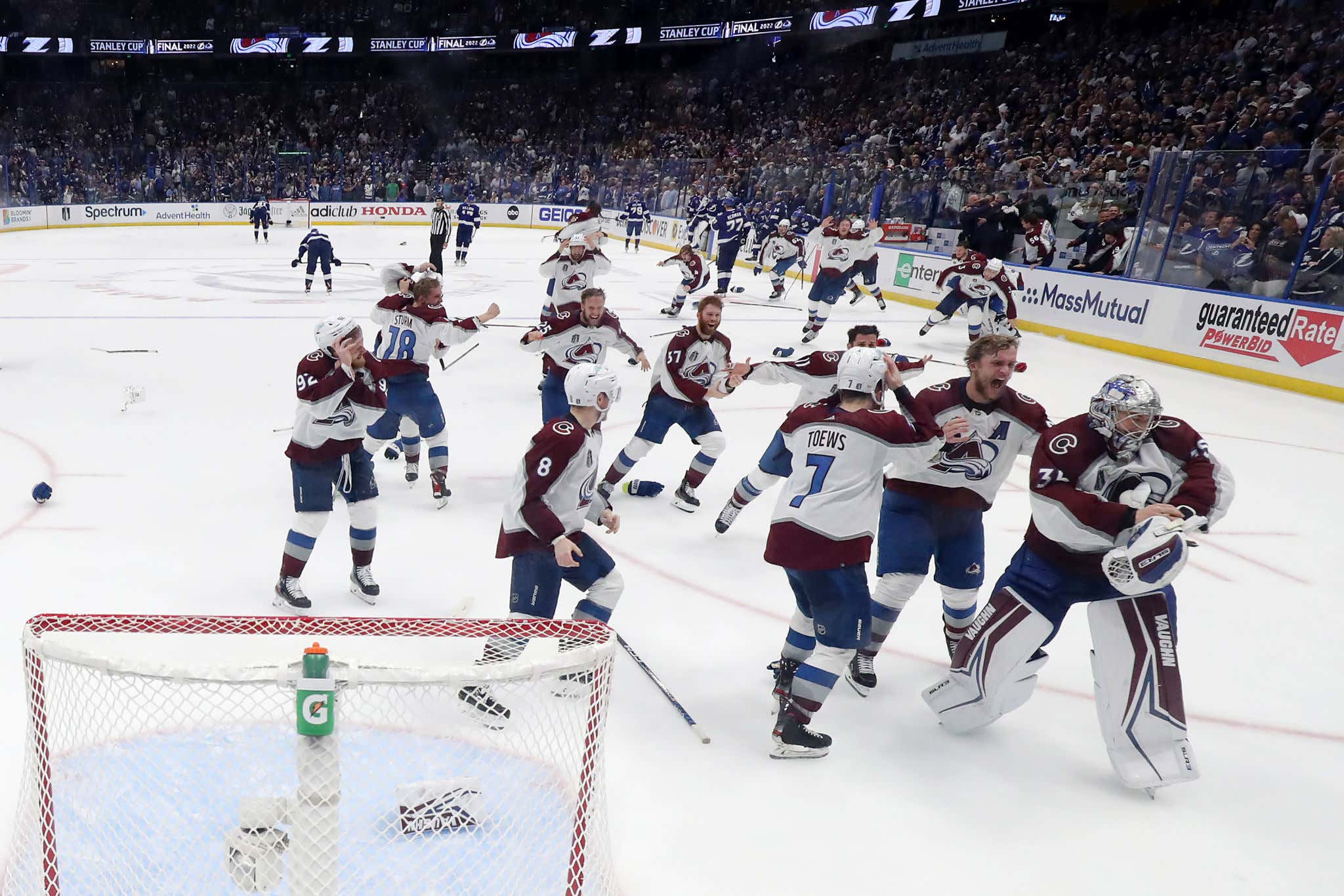 Aaaaaaand we have a Stanley Cup champion!!! On the heels of three consecutive second-round playoff exits, the Colorado Avalanche put together one of the most dominant runs we've ever seen, losing only twice before squaring off in the Final with the two-time defending champion Tampa Bay Lightning.

To blow Game 5 at home was a bit of a bummer, yet you have to give Colorado credit for overcoming a Steven Stamkos goal just 3:48 into Sunday's Game 6, rallying with some of its best collective hockey, and ultimately prevailing 2-1.

Stammer's point-blank shot through Darcy Kuemper's five-hole was instigated by an incredible forechecking job from none other than Nikita Kucherov. Championship dudes making championship plays, what else can you say.

Speaking of that last unsophisticated but cool sentence, you can now say the same about Nathan MacKinnon, and frankly, it was only a matter of time, right? It was his 13th of these Stanley Cup playoffs. Could I interest you in a filthy one timer that grazes Andrei Vasilevskiy's playoff-problematic blocker?

The blocker side has been Vasilevskiy's clear weakness in the postseason. Strange and unusual for him. Seemed like the Avs struggled to exploit it throughout the series. That's part of the reason Artturi Lehkonen's goal at the 12:28 mark of the second was Colorado's first regulation lead since the opening period of Game 3:

I'm all for quality hockey and an epic Stanley Cup Final matchup, but I gotta say I'm relieved this year's grand closing act in the NHL is over. The Lightning have earned clout with back-to-back Cups, but Tampa Bay and its coach Jon Cooper just would not stop incessantly whining about every fucking goal down the stretch of this series.

Between inordinate amounts of time allotted to Cooper to consider whether to challenge the Avalanche's goals, public comments by Bolts players or, like tonight, Pat Maroon ready to damn near murder Josh Manson on the Amalie Arena ice after that second-period go-ahead goal by Lehkonen, it was one thing after another.

Maroon has earned the right to be a little chippy, because he'd won the Stanley Cup in each of the past THREE postseasons before Sunday night. Still, how in the name of Zeus' butthole is that not a penalty?

Yeah more like FIVE-minute major, amirite? I guess I'm not because Maroon didn't go to the sin bin for that. What I was right about is Colorado WINNING THE DAMN CUP BAY-BEEEEEE. Got 'em in mid-April at +350. So I'm relieved the NHL season is over for that reason too…when Stamkos scored that first goal, I really thought the Avs were headed for blowing this 3-1 Stanley Cup lead.

I saw this stat from yesterday and had to pass it along, because it really underscores how impressive the Bolts' Cup defense was.

Tampa Bay took more than 10 minutes to get its first shot on goal in the final period, which tells you something about how gassed they were by the end of this run. That said, I'm not taking anything away from the Avalanche defense during that sequence. They were staying aggressive, not playing scared. Decent chances were had on the other end to keep Vasilevskiy on his toes. Despite how good he was between the pipes for much of this highly anticipated showdown, Colorado was absolutely shutting the Bolts down. Incredible stuff.

While I don't agree with how the Lightning players/coach/fans conducted themselves at times, I can hardly blame them for emotions boiling over a bit/getting peeved by the officiating. They had such a tough road to get through the Eastern Conference. Rallied from a 3-2 deficit against Toronto and a 2-0 deficit vs. the Rangers. Still got here.

Not like the Avs had it easy, though, and they, ya know, to use the bad pun, rolled over their competition in dominant fashion at every turn. You'd think a team without that Stanley Cup-winning mettle might wilt against such a battle-tested Lightning club. However, both Games 1 and 4 went to overtime, and Colorado prevailed in each of those.

Yeah I know Lightning fans the Game 4 winner had a dubious missed too many men on the ice call yada yada yada but remember how the Avs struck iron twice and were dominating puck possession the entire extra period before that? The hockey gods served proper justice to those bad breaks. Search your feelings. You know it to be true.

I will give you…Gabriel Landeskog losing his skate blade and not getting back to the bench SHOULD'VE been called tonight when the Bolts had the extra attacker on searching for a desperation equalizer in the final minutes:

This Avalanche group was kind of like the current Lightning core before tonight. Phenomenal play throughout the regular season only to flop sweat and choke when it mattered most. It was simply Colorado's turn this time around, as they improved to 9-1 in the playoffs on the road. The better team won.

Big shout to Cale Makar, too, who took home the Conn Smythe Trophy as playoff MVP after putting up eight goals and 21 assists.

Wild that Joe Sakic captained the last Avs Cup winner in 2001, and as GM, has been instrumental in building the franchise's current powerhouse roster that's built to contend for years to come — provided they can keep enough guys around. What an awesome story!! If anyone didn't get to see Sakic play back in the day, well, this little anecdote is a fitting way to tie his era to what's happening now.