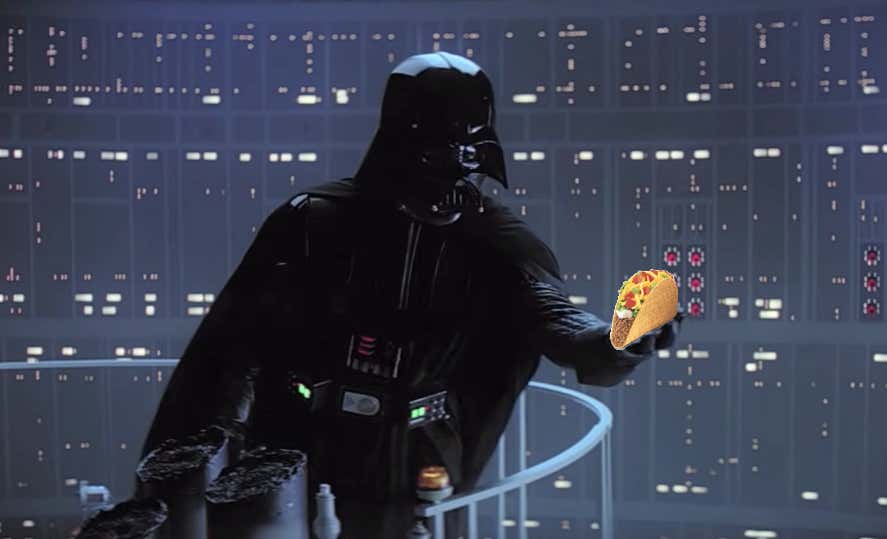 It wouldn't be the first thing I'd choose, or the second, or even the third, fourth, or fifth or something I'd even get excited about. But in the grand scheme of things in the Star Wars universe, it was fine and served its purpose of being a complement to the centerpiece of everything by filling in a few holes in A New Hope, which I guess is the Crunchwrap Supreme that changed the world (Empire is a Chalupa in that it's the real GOAT). To be honest, there are even better complement options, with Rogue One being a Nacho Doritos Loco Taco.

However, Obi-Wan Kenobi did have its highlights in between some definite lowlights (cough, cough, the Leia chase scenes) and a bunch of meh. The one common link for all those highlights is they either involved Anakin Skywalker or The Half Man, Half Amazing Machine Sith Lord Former Known As Anakin Skywalker fucking shit up.

So I'll chalk up Vader as the Supreme part of the Crunchy Taco Supreme, which I'm pretty sure is sour cream and tomatoes.

A few other random thoughts from the Season finale:

- The final shots of Darth Vader complete with the dueling voices of Hayden Christiansen and James Earl Jones as the light changes from blue to red was top notch while also explaining why Obi-Wan calls him Darth the first time he saw him along with the whole "He murdered your father" speech to Luke.

- I neeeeeed a Beru Disney+ series where she becomes the female version of Rambo in a galaxy far, far away. A true ride or die chick that always keeps that thang on her.

Is there a Beru Hive? Because if not, I'm starting it right now.

Fail Organa. Bail Morona. Blockhead Bail. Whatever you want to call him is an idiot. A fucking idiot.

- Uncle Obi dropping off a gift and a catchphrase on young Luke is how you make an impression on a kid. Smartest thing Obi-Wan did the entire series by far.

- The Vader fight scenes were fun but I would've been fine if Mustafar was the last place they faced off because the stakes seemed so much higher. That also may have been the case because John Williams wasn't involved in this series like he was the movies, which definitely did the Obi-Wan show no favors.

In fact, I am just going to end this blog with some John Williams because he fucking rules and we deserve it on a Friday.

If you want to listen to the podcast, check it out on Apple or Spotify.