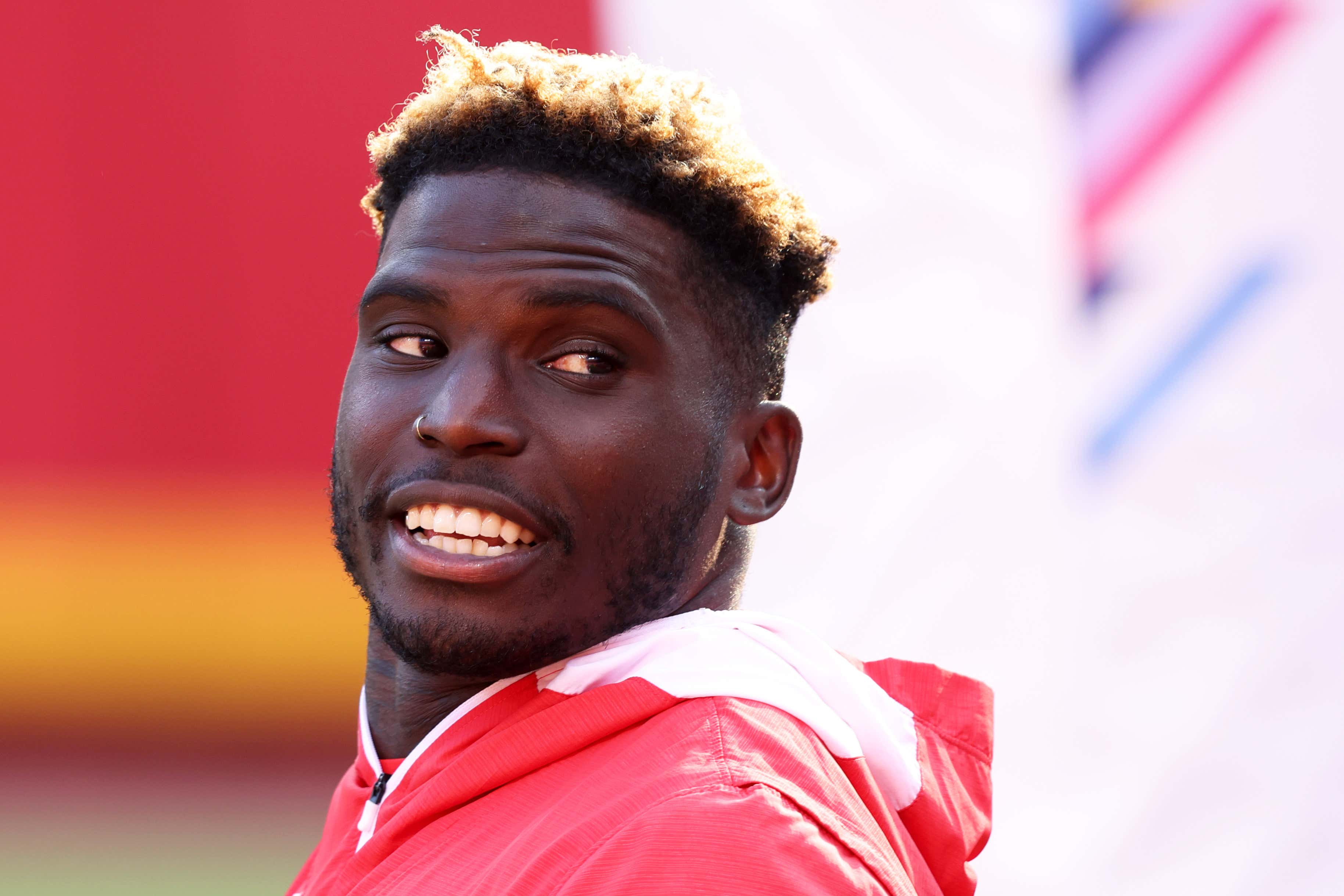 Say what you will about Tyreek Hill. He's an utterly unique athlete. The personification of the old cliche "He's a threat to score every time he touches the ball." A skillset that was gifted to him by the gods. And a personal life that sometimes seem to come straight from the demons of Pandemonium. A guy who just forced his way out of the perhaps the best situation in the NFL to get paid more in Miami. But make no mistake, when it comes to the fine arts of marketing and self-promotion, there may be no one better.

Hill launches a podcast and in the very first episode, declares that his new quarterback, Tua Tagovailoa, is a more accurate passer than his old QB, Patrick Mahomes.

A claim so thoroughly preposterous on its face, that it doesn't need to be examined. Anymore than if he'd said your average Barstool employee looks better with his shirt off than Chris Hemsworth. There's no reason for further scrutiny. Just laugh at the joke and move on.

But we also must recognize the genius behind saying it. Saying outrageous shit like this you can't possibly mean is how you get your podcast on the map. It's right out of Muhammed Ali's playbook. That's how The Greatest sold tickets, it's how Hill is getting ears into AirPods. And credit where it's due, he knew exactly how to follow it up in Episode 2:

Source - Miami Dolphins wide receiver Tyreek Hill said on the newest episode of his podcast that he received death threats on social media after he said he thought Tua Tagovailoa was a more accurate passer than Patrick Mahomes.

"On every social media account I own, I got death threats on," Hill said on the second episode of "It Needed To Be Said." …

"I just feel like a lot of people overreacted for no reason. They really didn't see what I said. A lot of people are just acting off emotion," Hill said on the episode released Tuesday.

"We all know Patrick Mahomes is great. We know that," Hill said. "But, right now, I'm going into a new season with a new quarterback who's trying to head in the same direction as Patrick and do great things and lead this team to a Super Bowl championship -- who is also great, in my opinion. He just doesn't have the accolades -- of yet. I believe in him."

Mahomes said last week that he was "surprised a little" by Hill's comments. He speculated that Hill's comments probably "had something to do with trying to get his podcast some stuff and get it rolling."

As a general rule, I'm a staunch death threat opponent. I  stand on my record of being against threatening someone with death over their sports opinions every time the issue has come up. I believe that strictly as a rhetorical device, "I will make you die for that take" means you cannot argue the facts and therefore have lost the argument. My position on this is clear.

But having said that, death threats are good for business. As long as we're talking about the typical internet fake tough guy type of death threat. Not the old fashioned kind where someone puts a dead rat in your bed or mails you the severed body part of a kidnapped loved one. I mean, let's differentiate between the two types. The internet kind is the sort of publicity you cannot buy. They make the news, give you attention, and get people thinking "This guy is saying things that makes unhinged crackpots want to commit murder on his person? This must be the edgiest, most controversial discussion on the internet! Is his show available wherever I get my podcasts from?!?" So well played by Hill.

And while we're on the subject, let's take a moment to acknowledge that there are whackjobs among us who are so beholden to the accuracy of a QB's passing arm that they'll vow to take a human life. Even if that life belongs to a guy who helped make that quarterback great in the first place. Now it would be irresponsible of me to assume these threats are coming from Chiefs fans. Or to speculate about high profile nutcases that have been associated with Patrick Mahomes. I'll leave you to do the math.

All I'm saying is that a quarterback's completion percentage is not something worth threatening a person's life over. And I say this as someone who's emotionally attached to one of the most accurate passers in the game.

Still, watch what you say about Mac Jones. Put respect on his name. I've got a podcast too.