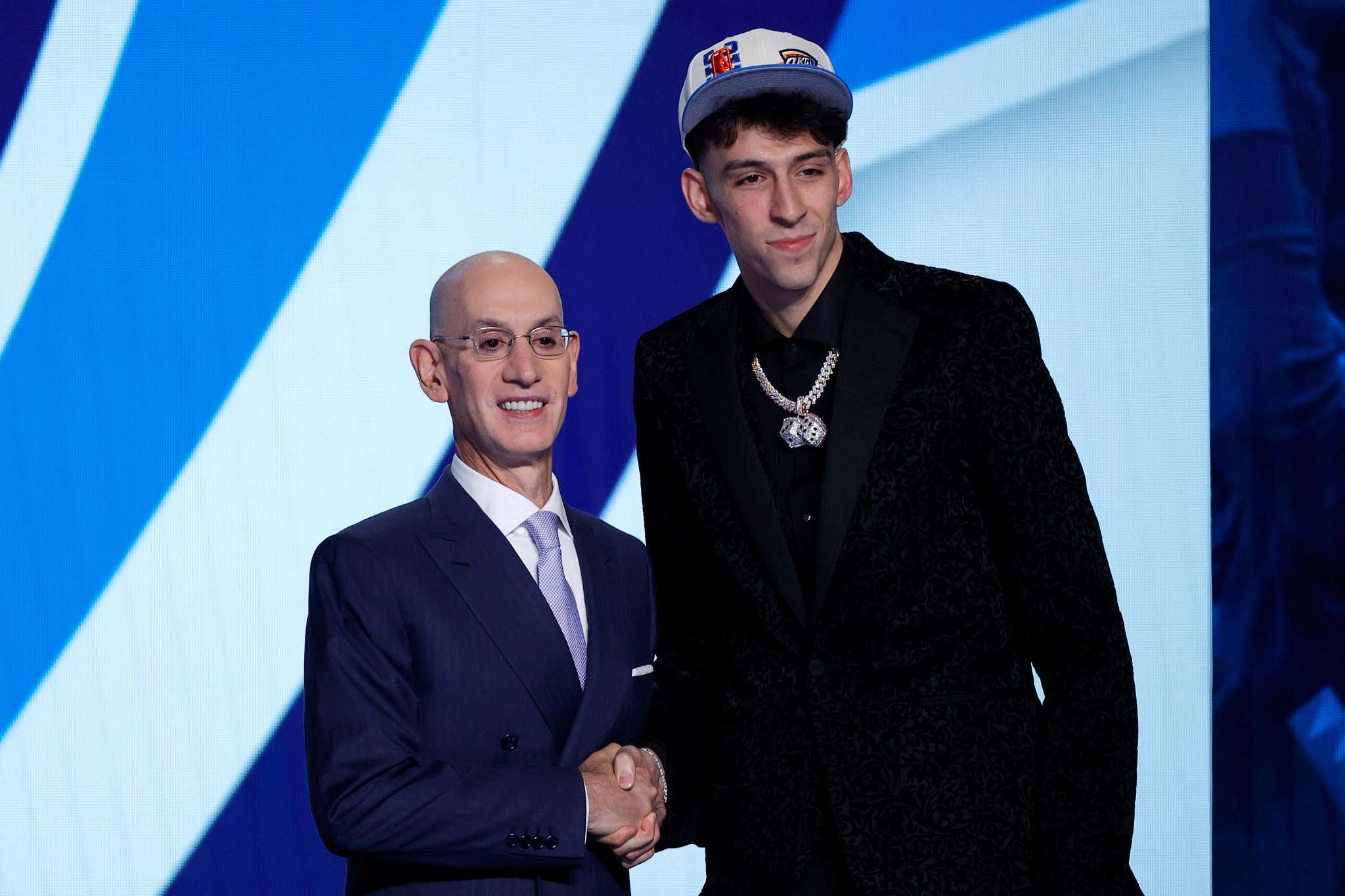 Oklahoma City Thunder fans have to be nauseated about any "NEXT YEAR" narratives surrounding their team. They've been waiting for next year for too many years. I'm telling you right now, OKC is stocked to the gills with assets, and they're about to cash the fuck in. The first step was not blowing tonight's pick. Consider that mission accomplished.

I'm on the record saying I would've taken Gonzaga big man Chet Holmgren first overall. Because the Orlando Magic are who they are, they opted to pass on him in favor of Paolo Banchero. Fine whatever. Meanwhile, Holmgren is on his way to Oklahoma City, as Galaxy-Brained Thunder GM Sam Presti selected him with the No. 2 pick on Thursday.

Holmgren is a lanky-as-hell 7-footer, but even some guys who have that wiry build can play strong with the ball and with a tenacity that makes up for a slender build. That's precisely what the one-and-done Zags star does. He averaged 3.7 blocks per contest, along with basically 14 and 10 on 60.7% from the field and 39% from 3-point range. Insane length, the ability to create off the dribble, defensive versatility off the charts…the skill set is unreal.

I don't know what there isn't to like about Chet Holmgren. What I do know is OKC now has a young core headlined by Holmgren, Shai-Gilgeous Alexander and Josh Giddey. I guess Luguentz Dort you can throw in there, too.

Now onto the Thunder's blindingly-bright future. Literally: The only guy they're paying big money to is SGA. They will have an immense amount of salary cap room in 2023 to pursue a LOADED unrestricted free agent class, which includes names such as, oh you know, LeBron James, James Harden, Kyrie Irving, Andrew Wiggins, Nikola Jokic and others.

We're only talking the UFAs. There are other potential restricted free agents and limitless sign-and-trade possibilities. Because you see, over the next three years, the Thunder have as many as 12 first-round draft picks. You read that right. Twelve. There are various protections on them and what not, yet they're still assets that can be packaged together to acquire big names to join an exciting young core.

Assuming it's another rough season in Oklahoma City, they should be either positioned to trade for a superstar with a high lottery pick, or have plenty of ammunition to trade up for, say, France's Victor Wembanyama.

The 7-foot-2 prodigy is basically like Holmgren, Rudy Gobert and Giannis rolled into one. If the Thunder fuck around and pair Holmgren with Wembanyama, they might actually break the NBA. My head is spinning with possibilities already for the Thunder with SGA, Giddey, Holmgren, Wembanyama/another 2023 No. 1 pick, Dort, whoever they draft 12th overall tonight (who really cares?) and [Insert max contract Superstar X here].

Before you scoff at the potential pairing of man mountains like Holmgren and Wembanyama — especially since OKC already has a 2020 first-rounder in Aleksej Pokuševski who put up a damn triple-double against the Suns this past season — look at what my beloved Cleveland Cavaliers did this to ignite their turnaround. Paid Jarrett Allen. Signed Lauri Markkanen. Drafted Evan Mobley. Still kept Kevin Love. BOOM right back in contention. Pokuševski could wind up being a trade chip as well, ya never know.

Anyway, I don't want to steal any THUNDER (see what I did there) from the Holmgren pick. Like I said, he's a worthy No. 1 and a potentially transformative force for an embattled franchise. Presti could've gone for a more straightforward, dominant offensive player. Again, his galaxy brain is operating at a high level. Holmgren's upside on offense is still immense. Nevertheless, this is more of a long-view move.

Excited as I am to see what Holmgren can do at the NBA level, I'm even more ready for the 2023-24 Oklahoma City Thunder.

UPDATE: The Thunder acquired the Knicks' 11th pick and the rights to French forward Ousmane Dieng, and picked Santa Clara guard Jalen Williams at No. 12. Per Woj, multiple first-rounders were sent to New York to land Dieng. Presti gonna Presti!