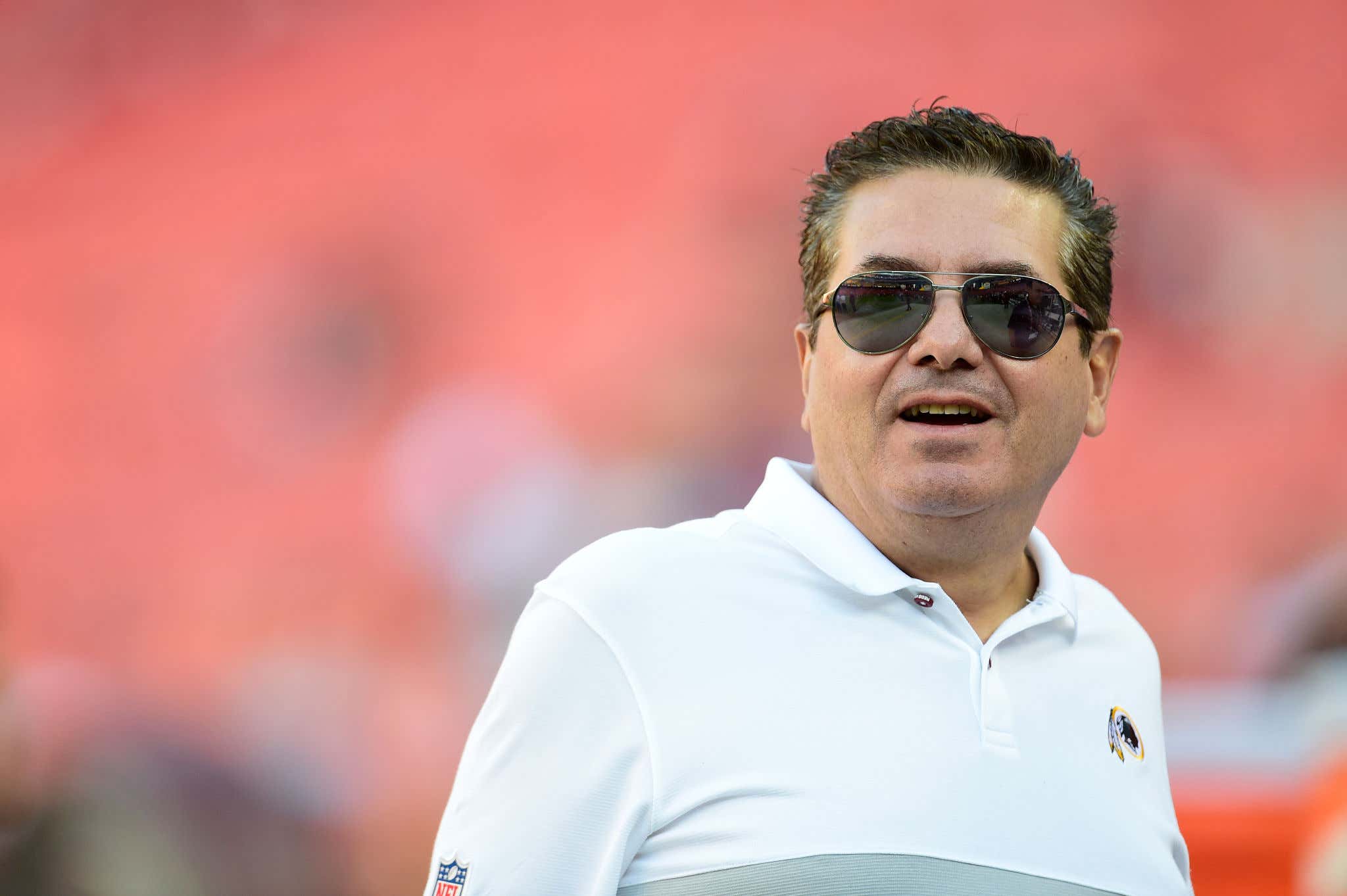 If there's one thing everyone in a divided country can agree on, it is Dan Snyder's indisputable awfulness. It's objectively true. A fact not in dispute.

Phrase the privilege he enjoyed at birth however you like. He was to the manor born. A lucky spermer. Born on 3rd base with a silver spoon in his pampered mouth. And yet still can't build a winner in decades of trying. He has been sued for mistreating his female employees and settled suits with cash payments and NDAs. He threatens legal action against sports humor sites that make fun of him, on the principle of Lèse-majesté, doing offense to the king. He has the most odious man in America commit perjury in front of Congress during an investigation into his wrongdoing:

People as terrible as Snyder inspire you to want to be better with words, just so you can find new and more expressive ways to describe his undeniable badness.

Well there was someone who almost perfected the English language. At least the contemporary American version of it. Hunter S. Thompson. 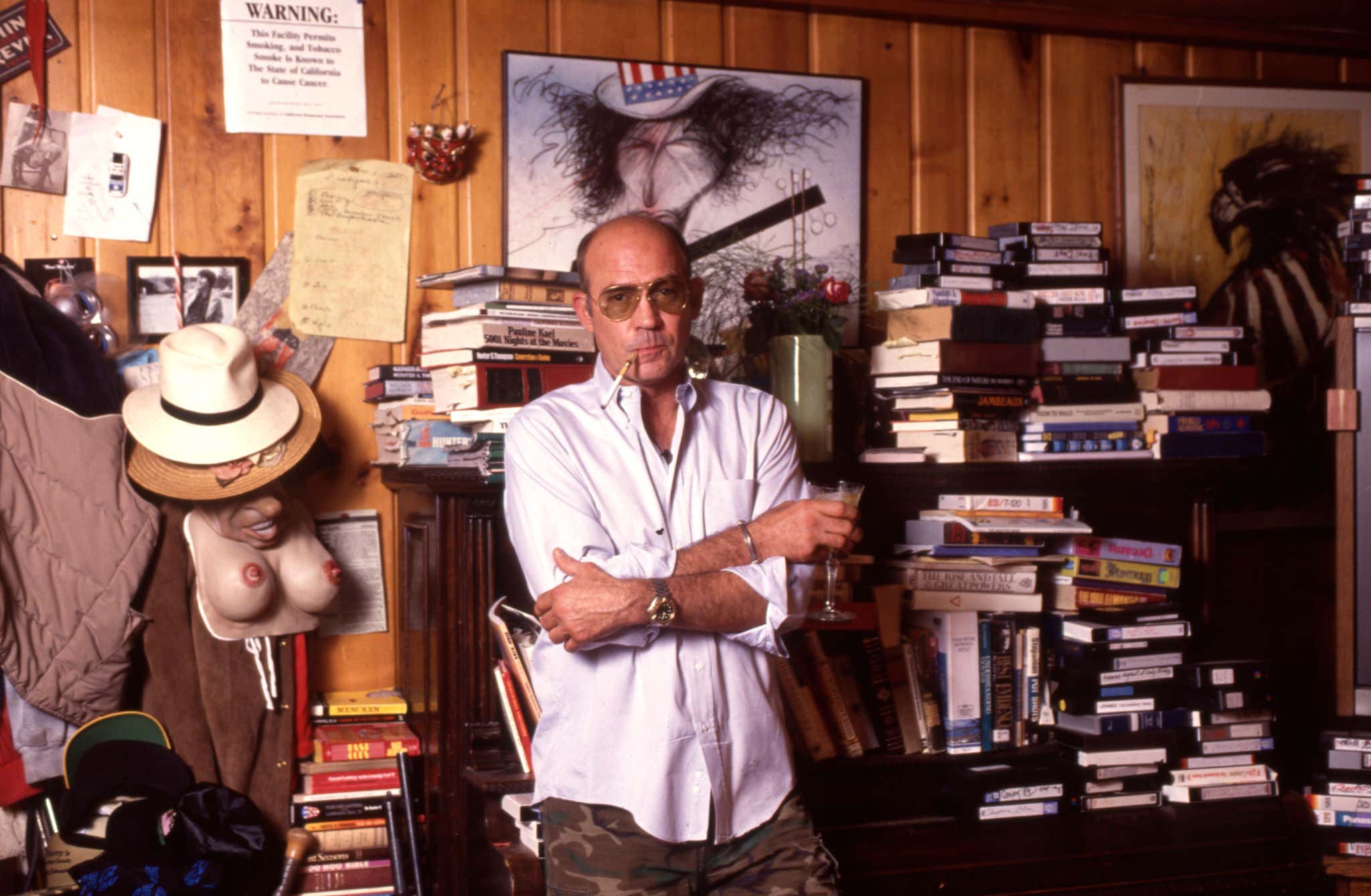 In some ways, Thompson might have been the quintessential American male. Sure you could make arguments for great historic figures like Washington, Boone, Lincoln, Edison, Patton, Sinatra, Elvis, MLK, JFK, Armstrong or either Roosevelt. But Thompson belongs in the discussion.

He loved the things that define what we are as a people. Indulgence. Debauchery. Violence. Drugs. Booze. Fear. Loathing. Las Vegas. Guns. And, most significantly, football.

He always wrote about football. As well as he covered any other other topic that interested him. When I was researching my first book (well, since you asked, it's available here), I came across a quote from him about running back Duane Thomas. The Patriots acquired Thomas from Dallas, decided he was too high maintenance for their liking, gave up on him (as was their custom at the time), begged Dallas to do a take-back on the trade, only to watch helplessly while Thomas had great success (also a custom) with his new/old team. Thomas should've won the MVP of Super Bowl VI, but the writers gave it to the safer, more conservative choice, which was Roger Staubach. Of Thomas, Hunter S. wrote, "All he did was take the ball and run every time they called his number - which came to be more and more often, and in the Super Bowl, Thomas was the whole show."

And so it was that back in 2001, Thompson was writing a regular feature for ESPN's Page 2. Including this one item that was discovered by a Redditor and posted to the NFL thread. The publication date was the first week of October, 2001. So mere weeks after 9/11. And the man who invented Gonzo journalism, then 63 years old, was in the mood to go scorched earth on Snyder.

Source -  If Washington Redskins owner Daniel Snyder thinks his life has gone south on him now, he is in for a series of frightening shocks when he gets a dose of the rage and despair building up in the hearts of his once-loyal football fans in the metro-Washington area.   …

[A]nd these people are extremely stirred up by the disastrous fate they feel Snyder has brought down on their once-beloved Redskins. Which is true. They are doomed, lost like pigs in the wilderness -- a gang of squabbling losers with no pride and no shame and no hope at all of anything but failure for the next 20 years. In three games this season, they have been outscored 112-16.

I was a Redskins fan, in the pre-Snyder days. It was impossible not to like a winning team led by rogues like Sonny Jurgensen and Billy Kilmer. They were wild boys, anarchists, boozers and freaks who could win or lose on a whim and torture the hopes of their fans.

And then after describing the wild post-WWII days in DC, where the powerful and influential gathered to run the world and watch their football team fail:

Which brings us back to the much-despised Daniel Snyder

The Redskins were whipped again like rabid skunks on Sunday, but only a few people cared. Brooding on the fate of the Redskins is no longer considered cool, in Washington or anywhere else in the English-speaking world. Not even the President of the United States gives a hoot in hell about the pitiful fate of the 'Skins. They are the worst team in the NFL, and their owner is widely vilified.

But that doesn't bother Daniel Snyder. He is a rich and busy man, the owner of a proud franchise and the brand-new, state of the art FedEx Field, where his team plays eight games each year.

And then, the kill shot:

But what is Daniel Snyder really up to? Is he as stupid as a chicken on a freeway? Is he a natural fool?

No. The Redskins owner has been called many things -- from a treacherous greedhead to a savage jackass -- but he is rarely called a fool. …

That is where the Redskins come in. The team itself is a loss leader, a pawn in Snyder's larger scheme -- which is to lure confused rubes into his futuristic football stadium and sell them highly secure space, where they can relax and be entertained in peace and personal comfort for as long as they feel afraid.

Absolute art. Another of Hunter S. Thompson's masterpieces of blazing rage spun into literary gold. A howl of frustration expressed in the written word. More to the point, it is as true now as it was back in 2001. That edition of the WFT was 0-3 at the time of the writing, on their way to 8-8 in their one and only season with Marty Schottenheimer as head coach. And it could've been written at any time in the 17 years since Thompson took his own life. Which he did while on the phone with his wife from his "fortified compound" in Colorado. And, ironically enough, while in the middle of writing his ESPN column. Whatever that final post was about, it would've been hard to outdo this one. Or to have it be just as relevant 22 years after it was written. This Snyder rant most definitely is.

RIP to one of the great visionaries of our time. And for that matter, of all time.