There was a big fight yesterday. You heard about it. Link below but I'll treat you with some respect for now. Here's the hammer from MLB and it's outstanding. 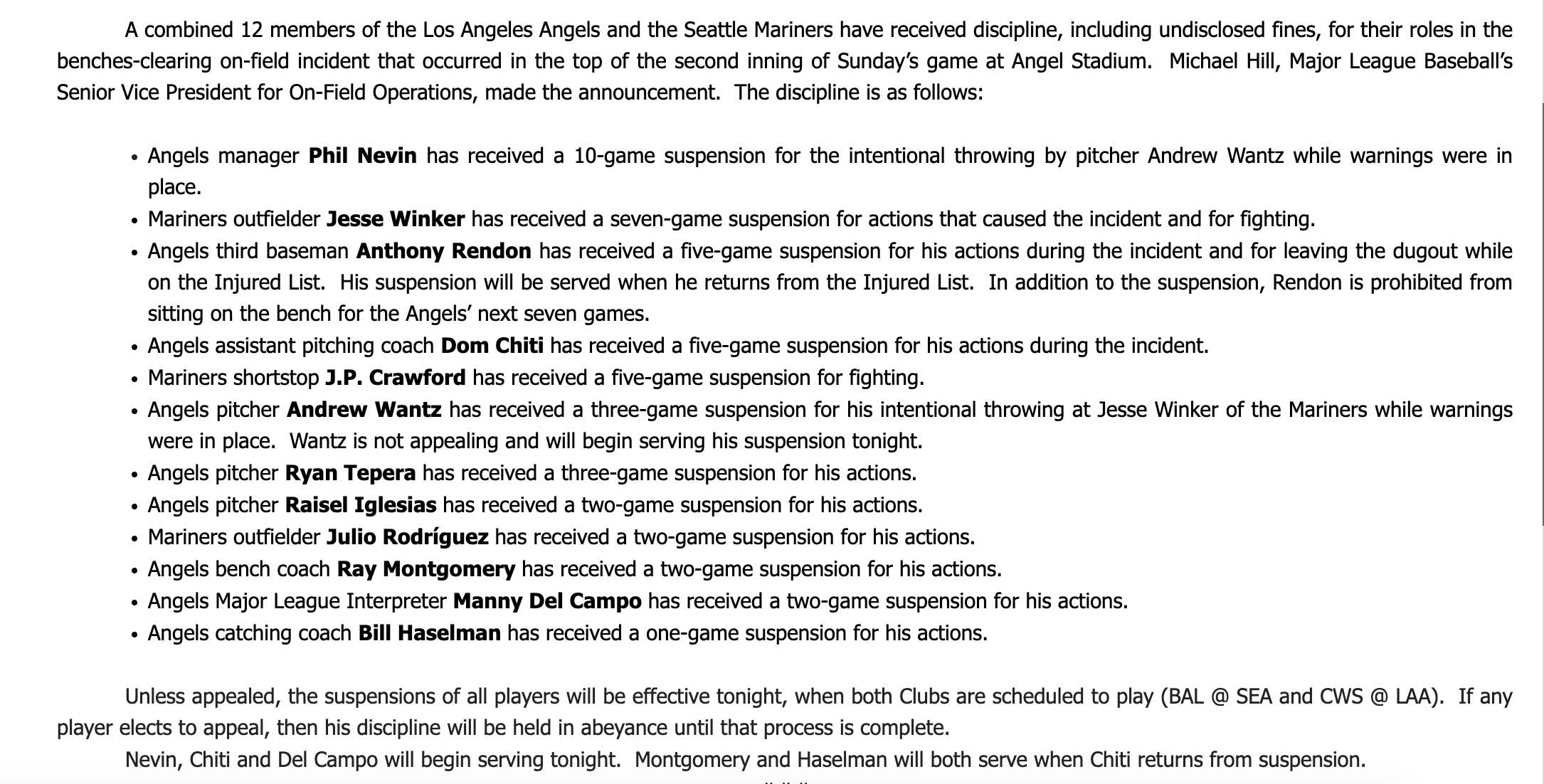 Absolutely perfect. Nobody and I mean Nobody on that field would have stabbed/shot/killed someone sooner than Manny Del Campo and I know that because I know Manny Del Campo personally. We golfed together last year when the Angels were in town. My Springfield buddy Smitty set up a bunch of rounds at Black Sheep in Aurora and then let me in the back door because they had an odd number. One of the all time great guys but this blog isn't about my Smitty. It's about Manny Del Campo and the Los Angeles Angels getting absolutely butt fucked with suspensions.

Whatever. You know Nevin's just pacing the office right now. TEN GAMES YOU THINK I GIVE A FLYIN FUCK ABOUT TEN GAMES ROB. YOU THINK I CAN'T DO TEN GAMES? I'LL DO TWENTY. GIVE ME TWENTY ROB.

*Drinks blood and Red Bull from his cupped hands

The Angels got some kick to them since Nevin took over I'll tell you that.

What I don't know is if Manny has a back up translator in tow. Like I swear on my life knowing Manny he's got a buddy or a cousin or something that played JUCO and has shin guards with the knee savers somewhere in the garage. I would imagine he'd like to have a say in who steps in on translation services. Like you don't just give that kind of responsibility up to HR while you're on suspension. You absolutely hand groom the backup like Brian Griese did to Kyle Orton.

Here's the fight and honestly credit to anyone who is just seeing this for the 1st time. I aspire for that level of disconnect.

- Phil Nevin is just an absolute looney bin and baseball is better for it. A lot of quiet soft spoken players today and I think there's a big market for his kind of fire.

- Rendon threw a left handed open slap and got 5 games. Weak sauce buddy. Can't serve it til next year and watch the Angels miss the Wild Card by a game. Watch.

- Jesse Winker would've gotten 8 games but they knocked one off for being nice to the girl that gave him the pepperoni pizza which is in the running for my favorite sports story of the year:

- Most important though is that I now care very much about a brand new rivalry. I have no idea how much lingering beef there is year over year between two franchises that have been scraping the bottom of the division for literally 10+ years basically each. I don't understand how we got to this point and quite frankly I don't care. I'm just happy we're here because I organically and genuinely give a shit now about this juicy ass beef.

Like do you realize how special that is? I would pay good money for another couple random division battles between a couple 4/5 heavyweights. Like give me a Tigers/Royals bad blood all day. Show me the Diamondbacks and the Rockies fighting to the death to start a 3-game series in August that is totally and utterly meaningless. That would be a glorious gift and one to be celebrated.

For now we got the Mariners and the Angels and that's awesome.

If MLB/ESPN knows what they're doing, this will steal the first week of August

They don't so follow me. We'll have plenty of coverage for the chaos those 4 days. Until then go listen to Starting 9 so I can afford to do cool shit with my friends