Source - The New England Patriots unveiled new throwback alternate uniforms to be worn on select games during the 2022 NFL season. Check out photos of Patriots players Kendrick Bourne, David Andrews, Matthew Judon & Matthew Slater wearing the new jerseys, pants and helmet for the first time, and take a close up look at the details, which feature a red jersey with white and blue shoulder stripes, white pants with red and blue stripes and a white helmet with the Pat Patriot logo.

It's fitting that the Patriots would use a throwback photo of Andre Tippett in announcing the triumphant return of Pat Patriot helmets and red jerseys after a 10-year hiatus due to NFL concussion safety protocols' ban on alternate helmets. Not just because he's a Hall of Famer. Or because he's the second best Patriot of the pre-Dynasty Era after only John Hannah. But because when the old uniform was replaced with the Flying Elvis helmet and blue jersey back in 1993, the new look was introduced at a press conference, modeled by Tippett. I remember specifically because that was the first offseason with Bill Parcells, who was asked what he thought. And he said, "Uniforms look great when they've got great players wearing them. So anything looks great on Andre Tippett," or words to that effect. Well put.

The team explains on their official site:

It didn't feel right to blend the red throwback jerseys with a silver helmet and the modern-day logo, so the alternate was taken out of the Patriots' rotation for the meantime.

Behind the scenes, though, New England led the charge to change the rule while maintaining player safety.

"There was a sort of understanding here that, no, we're not going to wear the silver helmets with the red throwbacks, right? That would be a different alternate uniform," Ali Towle, Vice President of Customer Marketing & Brand for Kraft Sports + Entertainment, said.

"We wanted to stay pure to that original throwback, and so that's why we waited and kept lobbying the league to change it back. We fought the good fight."

And to that, I think I can speak for all good, decent, red-blooded Pats fans with a discerning eye for style around the globe when I say,

Granted, it's just the throwback uni. The one we saw 12 times since the new one was adopted. With a record of 9-3 or .750, which is more or less what their winning percentage was for much of that time period. And since it's perhaps inappropriate to go completely away from the look with which they've had such incomparable success, I'll settle for once or twice a year.

In high school I had an English class called Semantics, in which we spent a lot of time discussing how words and symbols come to be synonymous with the thing they represent. Which is why we invented euphemisms that change over time. Because the word itself can have unpleasant connotations if you don't like the thing it's describing. Thus "toilet" becomes "rest room," "janitor" becomes "custodian" and "dwarf" becomes "little person." And sooner or later, you have to change those terms as well.

Well as a symbol, Pat Patriot represents some success. Some great players and moments, such as the Chuck Fairbanks' teams of the 70s or the Ray Berry team that was beating the '85 Bears 3-0 in Super Bowl XX. (I forget what happened over the last 58 minutes of that one.) But all in all, it came to be a symbol of futility. Of a brokeass ownership constantly broke and threatening to move to another market. Of dysfunction and mismanagement. The worst stadium in all of pro sports and losing ownership of said stadium because of Michael Jackson. For real. (It's a long story I'll get into sometime. But it's all here.) Whereas the post-1993 look - particularly its post-2001 iterations - is synonymous with success. Flying Elvis is recognized around the globe. And it strikes fear into the heart of all who stand before it like the gold eagle carried by the Roman legions.

And yet, strictly from the standpoint of aesthetics, there's no comparison. The old one is an achievement in color scheme and pattern. Pat Patriot is the perfect representation of the team's name and the region they play in. The only reason the league pushed for a change was that it's so intricate, it was hard to recreate using mid-90s technology. But in a completely digital age, there's no issue at all with reproducing it. As a side note, a few years ago I met Phil Bissell, the original artist who drew Pat back in 1960. Which I'm pretty sure was 15 years before the man was was born. 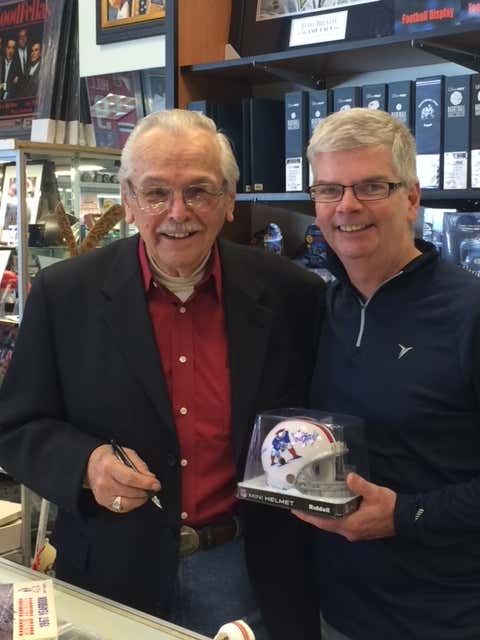 Regardless, 62 years after Pat Patriot was born, he'll be back on NFL fields where he belongs. You may say this doesn't matter and talking about it is a waste of time. If so, you have no appreciation for the finer things in this life and I have nothing but pity for you. May God have mercy on your soul.

Thanks to the Patriots organization for fighting this good fight. The world just became a more stylish place.