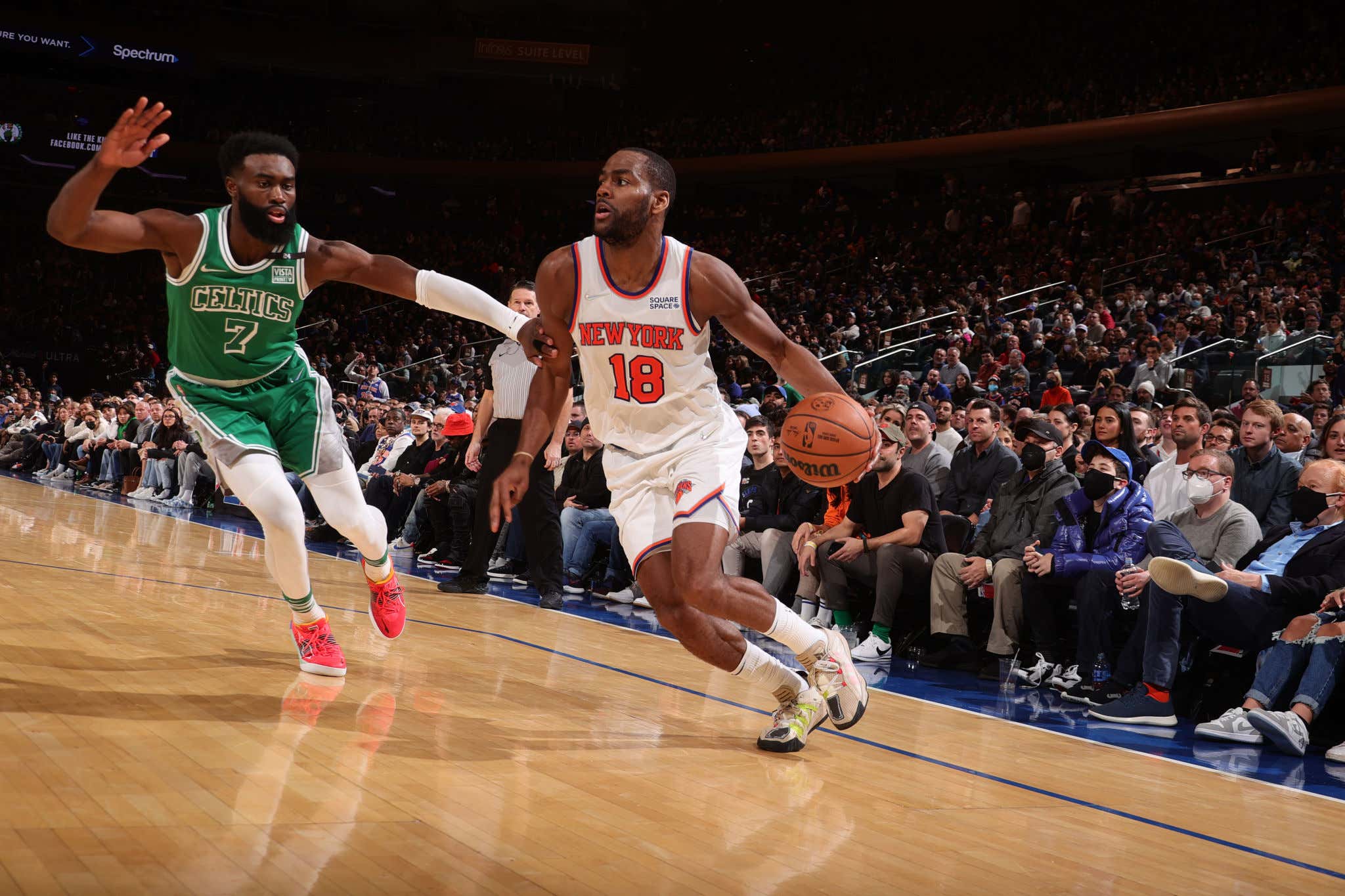 For my money, the most intriguing part of the Celts offseason is what the hell Brad does with the Fournier TPE money ($17.1M). He has to use it or at least part of it by July 18th, and there are obviously areas he needs to address on his roster that were exposed in the Celts deep playoff run and Finals loss. Whether you think they need a reserve big, ball handler help, shooting, or even all three, the point is Brad does have tools at his disposal to address those needs. Both Brad and Wyc went on the radio yesterday and went on record saying there will be no financial roadblocks from ownership in the quest to improve the roster, so now the debate shifts towards who should they even consider/look at?

I broke down the names a few days ago so you could get familiar with what type of market we're working with and I think collectively we as fans need to accept that no matter who they bring in, that player will have flaws. There's a reason they are on the trade market to begin with, so it's going to come down to if the positives of that player outweigh where they might struggle.

One name on that list from earlier in the week was someone like Alec Burks. Well, given the latest update we have on him and how the Knicks are thinking, I think it's pretty easy to make a case that Brad should absolutely call about him

So why do I think Brad should call about Burks and that he could be a legitimate option? It breaks down to the following

You see the part where the Knicks "hopes of taking back little to no salary"? That's code for please, teams out there with a 10M+ TPE, please call us. The beauty of those TPEs is you do not have to send back salary in order to facilitate the trade. It's clear the Knicks want to do everything they can to be set up to have cap space, probably for someone like Jalen Brunson. Here is the list of teams that have a 10M+ TPE to work with

That's it. Some interesting options where if the Knicks prefer to go the TPE route, I imagine they'll have some takers. Not only is his salary this upcoming season manageable, he also has a team option for 10.5M next season. If he pans out, great, you get a good rotation player on a reasonable salary number. If you need to move off his deal to pursue something else next summer? That's no problem at all. That type of flexibility alone makes him an attractive option to me. In an ideal world, the Celts find a way to use the TPE (or the majority of it) on a guy who isn't on an expiring contract.

I also think it matters that if the Celts were to pursue Burks, they'd still have around 7M left of that TPE to work with. You can find a nice rotation player with that amount of money that further addresses your needs. If you want more than one guy with that Fournier money, I think you have to stay in that 10-11M range for one of them. Given his surgery potentially lowering his value, that would also enable Brad to maybe keep some picks that he can then use on additional pieces. Maybe the TPE + 1 2nd round pick is enough. That seems to be the going rate for a player of Burks' caliber (see Josh Richardson last summer)

As important as the financial side of this deal is, the skillset is equally as important. One thing we learned this postseason was that the Celts desperately need a reserve wing they can trust. One who ideally can make threes. Here's what we know about Alec Burks. At 6'6, he has good size to play the 2 or 3. He's a career 38% three point shooter, and has shot 39.5% from three dating back to the 2018-19 season.

I wanted to dig even deeper into that three point shooting, so I decided to look at his catch & shoot numbers. We all saw what happens when Tatum/Brown were doubled. This season, Burks shot 41.8% on catch & shoot 3PA. In 20-21, he shot 38.2%. In 19-20, he shot 37.7%. Basically, you can trust him as a catch & shoot option. The next thing I wanted to see was Burks' shot profile. Where were his 3PA coming from? I think you'll like the answer 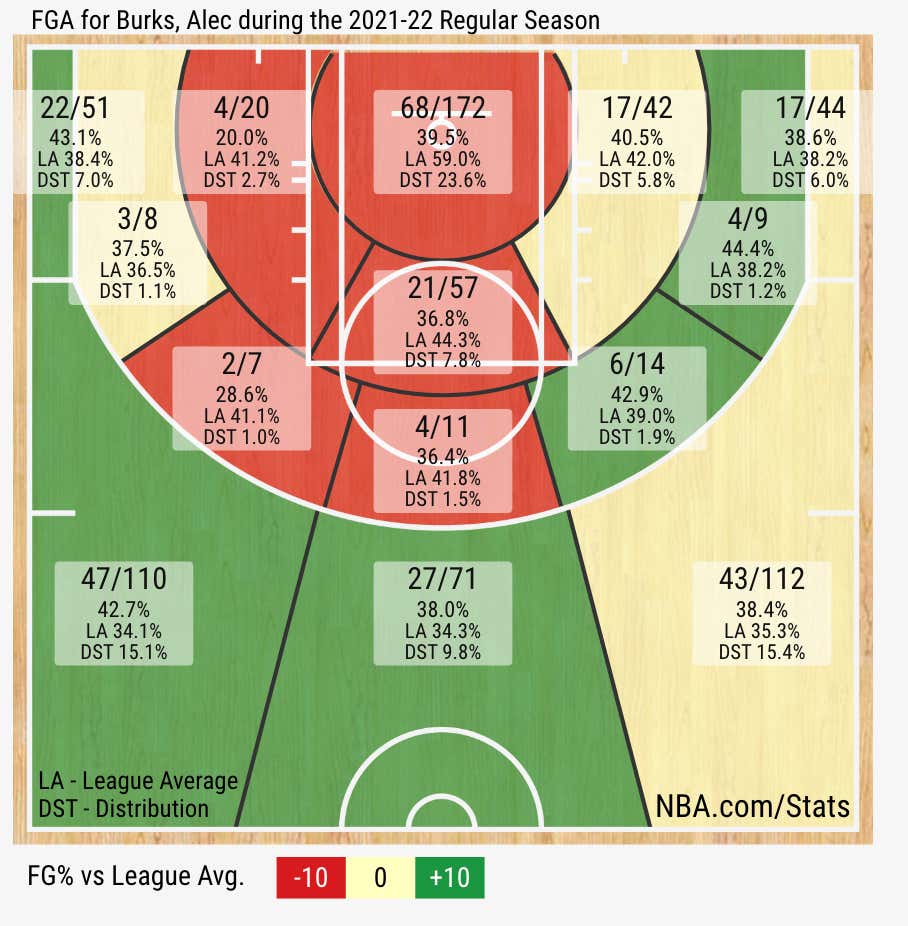 Again, think of where the ball is going on the plays Tatum/Brown are trapped at the top of the arc. Ideally, you are putting players next to them that are one pass away who thrive from that zone. Given the volume Burks shot from on either side, that seems to fit the need.

What I found interesting is that based on Basketball Reference tracking, Burks played 35% of his minutes at PG this season for the Knicks. That tells me he probably feels comfortable in that spot if needed in certain lineups. He's only 30 so it's not like he's super old, and historically he seems to be able to take care of the basketball (career 1.2 TOs).

Of course, there are some flaws. He's not overly efficient from the floor (39.1% last year) and is a career 41.8% shooter. He's actually never had a season over 42% in his entire career. But remember, we said the same shit about Josh Richardson heading into this season. Sometimes fit, scheme and the surrounding talent can improve those areas.

Defensively I don't think anyone is putting Burks on an All Defensive team, but he does have good size and plays with energy. That would be something you either hope Ime finds a way to improve, or the collective unit is good enough to overcome what Burks may lack on that end.

We talk so much about how guys "need to accept their roles". Well, seeing as how Burks has essentially always been a bench player, I can't see him having any issues coming off the bench of this team. You can spot start him if you need to in the event of injury or rest, he did start 44 games this year, but to me this is a guy who understands his role as a reserve guard/wing.

If you are of the thinking that the Celts need to be making sure to keep their franchise guy happy, well then it's probably important for you to know that Tatum is the God Father of Alec Burks' kid. That seems like someone he wouldn't mind adding to the roster. For me, this is the least important of the reasons Brad should call, but it's on the list. I care more about the contract and the skillset, but I do think it's important that Tatum AND Brown feel like Brad is going out and adding players they not only would want to play with, but can actually help the roster.

I am fully aware that the name "Alec Burks" might not be sexy enough for some. You see names that fit the Fournier TPE that are much bigger stars and better players and maybe that's who you want. Those players also aren't realistic in my opinion. The whole point of this summer should be spending time talking about realistic options. Given what is being reported from the Knicks side combined with his skillset and contract, I see no reason why Burks isn't a realistic option. The Knicks and Celts even had a history of working together, even if that feels a little weird. As you saw, it's not like the Celts are the Knicks only option, but for a team that should be looking to sure up their depth while maintaining future flexibility, Burks certainly does check a lot of boxes.

Will it happen? Who the hell knows. This stuff is impossible to predict. But at the very least I would like Brad to pick up the phone and inquire.