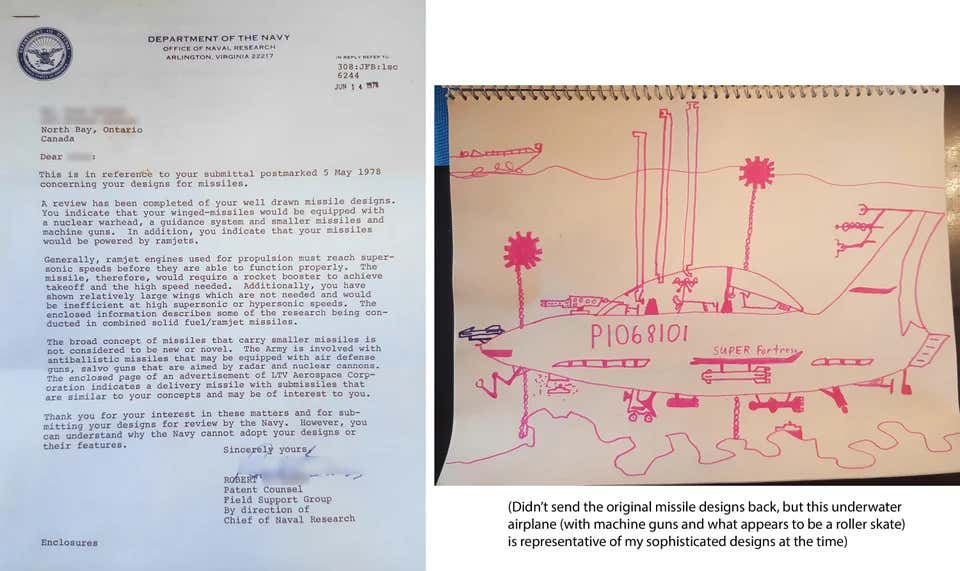 I gotta be honest, I think the Patent Office in 1978 really fucked this up. I mean, that's not the actual design but if it's close enough, it's gotta be better than the F-35. This thing is LOADED down with weapons. We have a mounted machine gun at the nose. Probably the same one that the A-10 uses. We've got multiple missile systems that are ready to rock your fucking world at any point the pilot desires.

However, I would note that the poster here on reddit was a little bit misleading in the drawing that he chose. For instance, the Patent office marks how big the wings on the design were. I don't see a huge wing in the drawing provided. I do, however, see that the drawing in the Reddit post is also capable of going underwater. That's a game-changer. As of this writing, the US simply does not have a vehicle like the one we see in the drawing. It would be huge.

In a time when the Marine Corps is focusing on amphibious assaults, a hybrid plane/submarine with nuclear and anti-aircraft missile systems would make us the Belle of the Ball.

In short, I would how that this now 52-year-old boy would submit this design because it's exactly what we need. Hell, if Will Hunting would have taken one of those jobs that Professor Lambeau tried to get him, I bet we'd have about 150 of these bad boys in the air right damn now that were pullin mad Gs while also operating like Jet Skis and submarines. Incredible. If you need to learn how to survive in a jet plane, we got you covered in this episode too.