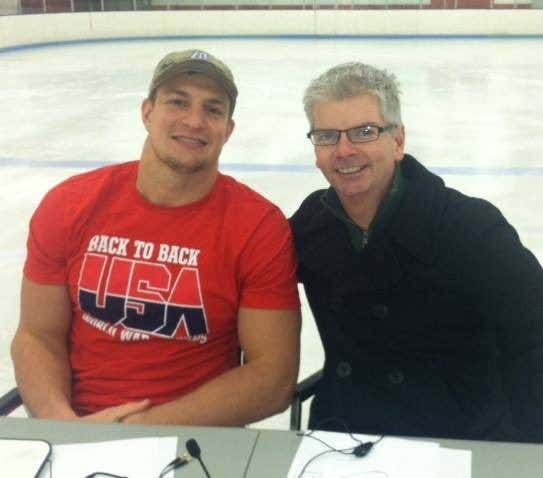 The time will yet come to take a deep dive into where Rob Gronkowski ranks among NFL tight ends of all time. That time is not right now.

As fate would have it, a couple of weeks ago one of the major football Twitter accounts (I forget which) posted some highlights of Travis Kelce and suggesting Gronk could not have done what he does. A question that immediately got buried in avalanche of Gronk references. As it should have.

I say without fear of contradiction that Gronk at his best was better than anyone else's best. If that's how you measure greatness, he's your GOAT. But in a case such as this, it's fair to measure it differently. To go with someone who with someone who had the best career. Who had that combination of production and longevity to put together an impressive resume that sets career record after career record. For example, Tony Gonzalez: 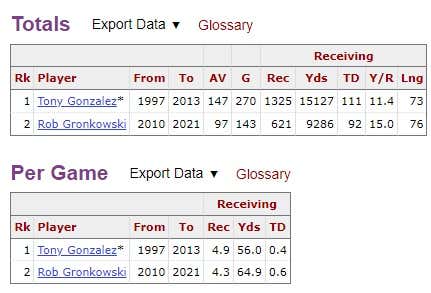 Gonzalez is first all time in receptions (by almost 200), receiving yards (by over 2,000), and second behind Antonio Gates (116) in touchdowns. Gronk is tenth, fifth, and third respectively. While ranking second behind only Jackie Smith with 15.0 yards per reception,

So it's an eye of the beholder thing. In his 11 seasons, Gronk appeared in 11 or more nine times. And many of those were among the most prolific anyone has ever had at one of the toughest positions in all of sports. As far as Boston athletes go, he's a good comp for Bobby Orr, Larry Bird or Pedro Martinez. Guys whose peaks were higher than anyone else's. But they weren't blessed with the longevity we would've wished for.

The miles and the hits took a toll. Gronk was so unstoppable that the NFL started employing a specific set of rules that applied only to guarding him. In an era where physical defense is outlawed and you can get a personal foul for thinking impure thoughts about Kelce, not only could you commit mayhem against Gronkowski with impunity, the OPIs calls against him increased as his career went along. They were leveling the playing field. And it took a level bigger than Archimedes ever dreamt of when he was talking about moving the Earth in order to slow him down. The shots on his knees, to his helmet, and to his surgically repaired back mounted, and eventually he began to play at an almost human level.

But this is not the time for "might have beens." It's a time for highlighting the highlights. Appreciating all we were blessed to bear witness to. Gronk's greatest hits Feast your eyes on this all-you-can-eat buffet of magnificence:

Finally, my sentimental favorite. A beat up, 2018 Gronk. Reduced through much of the latter half of the season to be a blocking TE/decoy, sets up the only touchdown of Super Bowl LIII:

I still have my doubts this second retirement is anymore officially official than the first one. But if that turns out to be the case, let these clips serve as a reminder to future generations what this rare athlete gave us. And wish the man everything he's earned in retirement.