Man. If there is one thing all poker players agree on, its more rake is better. No okay, that's a joke only us nerdy poker fans understand. But for real, one thing universally agreed on by 99% of poker players, its that Phil Ivey is the GOAT. The best to ever do it. Cash games or tournaments, it doesn't matter- Ivey is the king. Online or live, in America or Macau, if Ivey is in the game, your butt cheeks are clenched.

And it's wild because Ivey doesn't "get in the lab" and study the game like the GTO wizards, or at least that's what we're told. He maybeeee studies a little more than he leads on just to stay sharp, but it also wouldn't shock me if the majority of his studying comes from talking poker with other players. He definitely isn't running sims or diving into solvers or any of that nonsense. He's Phil fuckin' Ivey, he IS the sim.

What sucks is Ivey basically stopped playing WSOP events for 8 years. 1 or 2 a year, at most, was all he played. He collected 10 bracelets and then basically just focused on cash games. What's also sick is despite taking all those years off, he's STILL tied for 2nd all time in bracelets with 10. That's simply how dominate he was in his younger days. But then he got too rich and figured why play a $1500 tournament when you're playing cash games where the big blind is $100k? Just wasn't worth his time. 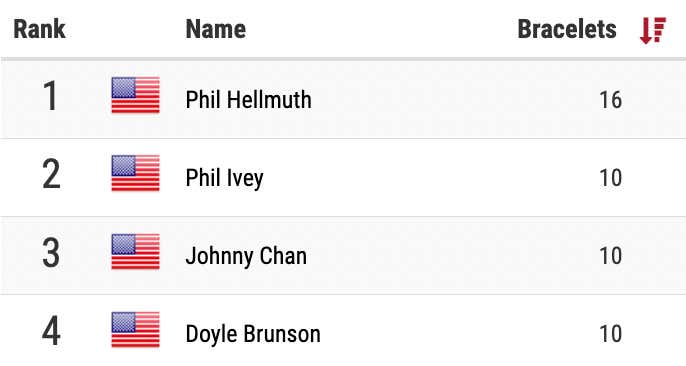 But now our guy is BACK at the WSOP and doing what he does best- final tabling. It also is very cool that he has a documentary team following him around.

Winning his 11th bracelet for the documentary would be great. Also his candid thoughts on his bluff gone wrong in the $100k will be cool as well.

I'll be out in Vegas soon. Can't wait to win my first bracelet and talk about it on Cracking Aces!