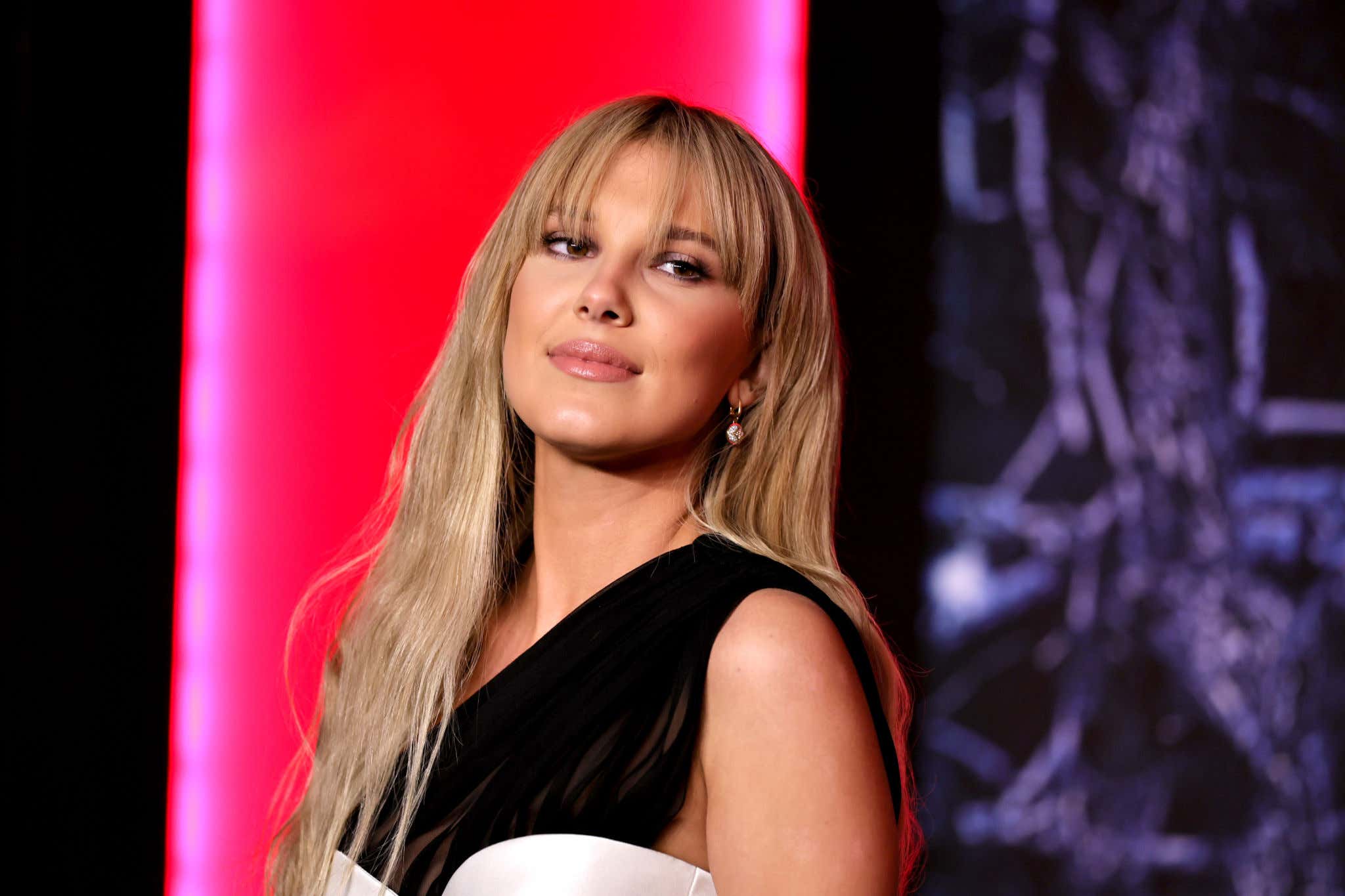 Brit star Millie Bobby Brown is gunning to move on from Stranger Things to a galaxy far, far away. I can reveal the Star Wars fan has held secret talks with Disney executives – and could have a £12million payday. Millie, 18, and her father and manager Robert are already friends with franchise boss Kathleen Kennedy. […] A source tells me: 'Millie is on Disney’s radar for the new Star Wars projects. She’s had contact with Kathleen, who is aware of her desire to feature in a movie or play a central role in one of the new TV projects for Disney Plus. The conversations are informal but there’s huge mutual respect there. The Disney executives know just how much of an icon she is already for the 10 to 30-year-old audience and what that brings in terms of appeal. She could easily take home $15m for a first film or series.'"

Take this with a true Tatooine grain of sand/Crait grain of salt etc., but there's at least a chance that Millie Bobby Brown will be headlining a Star Wars project sometime relatively soon. Only a matter of weeks ago, Star Wars Celebration was held in Anaheim, which introduced some previously unknown projects, showed off footage and trailers for the ongoing Disney Plus saga, and gave us a better idea of which projects to expect when.

Let's go through some of the exciting films and TV shows in development at Lucasfilm and explore which known projects the Stranger Things megastar may be best fit for.

In some really interesting interviews with Total Film magazine, Kathleen Kennedy and Taika Waititi spoke about the status of the latter's film project. Waititi has acted as IG-11 in The Mandalorian and directed the Season 1 finale of the breakout show. Kennedy confirmed Waititi's movie is next in the pipeline, targeting a late 2023 release. Waititi's quote about his vision for what the story will entail should have fans looking for something new and fresh very excited for what's to come:

"Look, I think for the Star Wars universe to expand, it has to expand. I don't think that I'm any use in the Star Wars universe making a film where everyone's like, 'Oh great, well that's the blueprints to the Millennium Falcon, ah that's Chewbacca's grandmother.' That all stands alone, that's great, though I would like to take something new and create some new characters and just expand the world, otherwise it feels like it's a very small story."

So from the sound of it, we're going to go in a completely new direction. Kennedy said there's "no hesitancy" to explore stories beyond the Skywalker Saga. Waititi brings a refreshing sense of humor and sensibility to the Star Wars galaxy, and I think momentum for his project will only build when Thor: Love and Thunder comes out in a couple weeks.

Seeing an actor with Millie Bobby Brown's dramatic chops get to spearhead a Waititi-directed tentpole would be a fascinating combination. Beyond giving Brown a great chance to assert herself comedically like she does in Enola Holmes, we've seen in Waititi's Oscar-winning Jojo Rabbit that he can bring the intensity, emotion and gravitas to a well-told story. I have no idea what Waititi is going to do, but if he gets Brown in the lead role, we could see something really special at the end of next year.

For a little more context about everything I just laid out about Waititi's unique creative style, here's the first scene he directed in The Mandalorian.

According to a huge spread in Vanity Fair, this upcoming Disney Plus TV series is "set about a century before the era of the Skywalkers."

YES! For a show that's expected to come out sometime in 2023, casting details have been sparse. What we do know is that Russian Doll co-creator Leslye Headland is a massive Star Wars nerd who deliberately chose this time period to explore. She's stated her fascination with the untold events that led to the downfall of the Jedi and the Republic.

"My question when watching The Phantom Menace was always like, ‘Well, how did things get to this point?’ How did we get to a point where a Sith lord can infiltrate the Senate and none of the Jedi pick up on it? Like, what went wrong? What are the scenarios that led us to this moment?" Headland said.

The Acolyte is meant to be a mystery-thriller of sorts, and Amandla Stenberg has been heavily rumored to be in the main role. However, no official confirmation on that front. If you plugged in Brown and Stenberg as co-leads, the hype around this show would go through the roof. It's already exciting that we're getting some brand-new material on the Star Wars timeline in live action. To have young, gifted actors like Stenberg and Brown paired with a creative, original storyteller in Headland seems like an ideal match.

Whatever happens with casting, we'll be seeing what's known as the High Republic era in The Acolyte. That spot in the timeline has been heavily explored of late in a lot of expanded Star Wars media.

More toxic corners of Star Wars fandom might hate on this possibility because of the lack of masculine energy, especially on the heels of Rey leading the sequel film trilogy and Felicity Jones' starring turn as Jyn Erso in Rogue One. Oh well. Deal with it.

That top-secret film Kevin Feige is cooking up

Brevity is not one of my strengths, but I'll keep this tighter since we don't know much about it yet. Kevin Feige is the master architect of the Marvel Cinematic Universe. He's got Michael Waldron writing a script right now. As soon as Feige and Waldron are ready, I imagine there'll be a fast-track toward production. This project is a little further off, though, so Brown would have to wait a while. Given Feige's track record of churning out hit after hit, it'd be worth it for Brown to be patient and take center stage of his Star Wars movie.

As for what type of character Brown could play in any of these movies…I feel like her options are limitless. A lot of Star Wars baddies have British accents, so she could easily fit into an ambitious Imperial officer trying to rapidly climb the ranks. Think General Hux but more badass. Then of course, she's already proven capable of crushing it as a telekinetic hero as Stranger Things' Eleven, so why not just make her a Jedi? OR BETTER YET, Eleven definitely has shown a dark side, so it's not a stretch to plug Brown in as some sort of Sith-worshipping Force user. Maybe that'd be too predictable. Or they could go the Jyn Erso route with Brown's starring role. Make her a grounded, everyday protagonist thrust into extraordinary circumstances. That's always fun.

Felt this needed to be added after the fact: If this rumor is true, it seems like Brown's involvement in Star Wars is trending in the opposite direction of Patty Jenkins' fighter pilot movie Rogue Squadron. Maybe if Brown signs on, that film gets bumped up, but I feel like Jenkins will be more focused on Wonder Woman 3 for the time being.

Brown is already racking up producer credits on multiple projects, so maybe she'll want to help craft an entirely different story. Whatever the case may be, if she does, in fact, join the Star Wars galaxy, I can't imagine it'll be anything less than epic. Or we've all been deceived by this preliminary rumor and it's straight-up not gonna happen. Which would bring out the dark side in all of us!