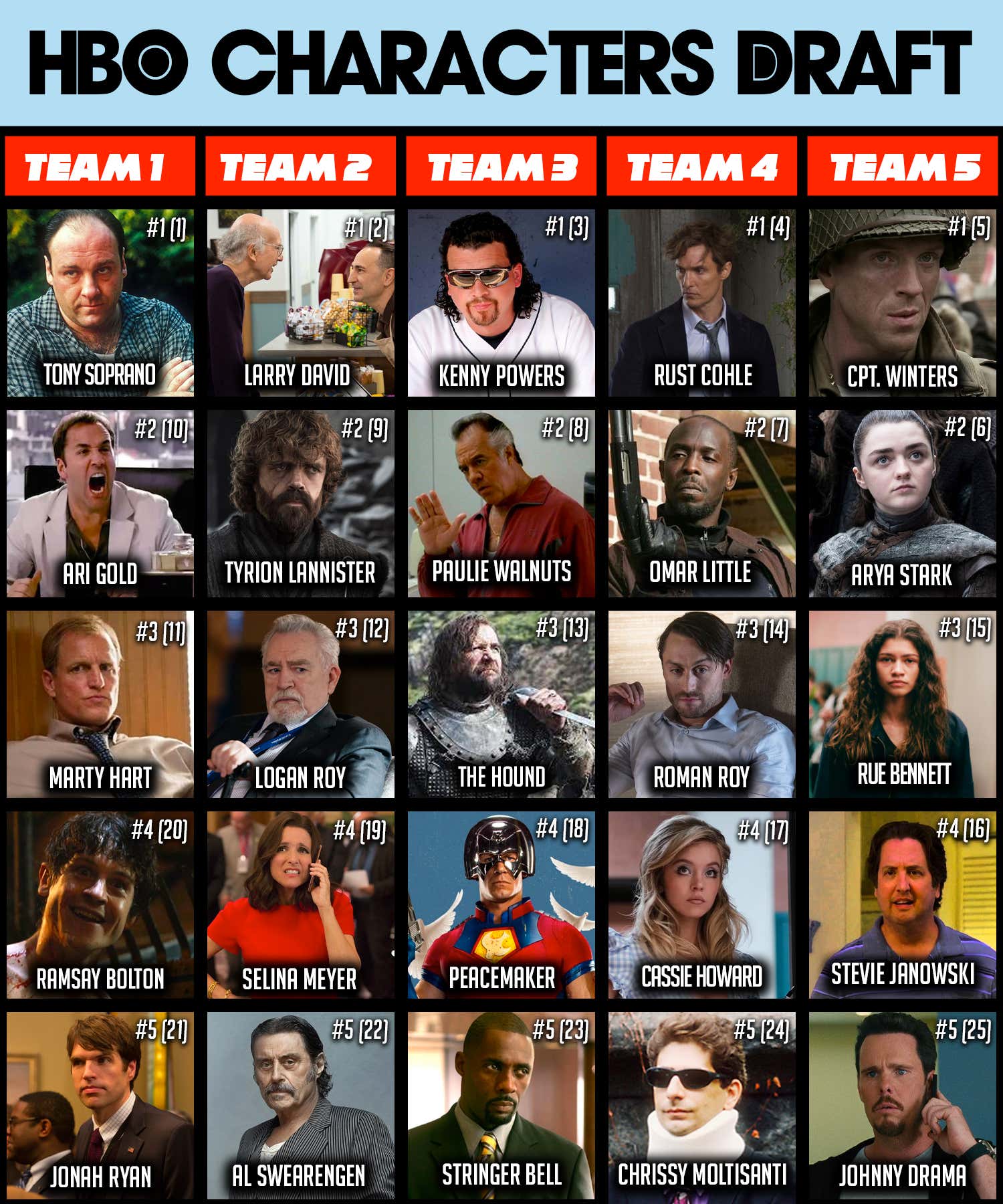 This week's Dog Walk Draft topic was Best HBO Characters of All-Time. The Chicago Guys and this week's special guest, KFC would be responsible for drafting their favorite characters on the premium station without any categorical limits. Here's how I view things after this very enjoyable, nostalgic draft that got me in the mood to click on the tube to watch the HBO intro:

Tony Soprano was an easy 1.1. Really the only choice there. No matter how you feel about the Sopranos, it's widely regarded as one of the best shows of all-time and he's the namesake. Team 1 didn't blow it here and starts off very top-heavy. I love the Ari Gold pick in Round 2. I'm not personally an Entourage guy, but Ari Gold transcends the show. He is an awesome character and his GIFs still play today. An absolute powerhouse 1-2 combo. Marty Hart in round 3 is a steal considering Rust Cohle went in the 1st round. I was not a Thrones guy, so can't speak to Ramsay Bolton, but I do love the value on Jonah Ryan in the 5th. I never watched Veep, but being able to quote a line like, "I was eating so much pussy I was shitting clits" is incredible.

Larry David is a very strong #2 overall pick. Curb Your Enthusiasm wasn't Seinfeld, but it was absolutely was close. David obviously wrote for Seinfeld and brought that same verve to HBO. Tyrion Lannister was an memorable character, but Round 2 felt a bit rich for me. Especially with Ari Gold going with the next pick. There is no Succession without Logan Roy, so that's decent value in Round 3. JLD is always going to move the needle for me and Veep was a monster at Award time. I respect the strategy in the end going a new show in Deadwood, but this Draft didn't stack up against the others for me.

Kenny Powers is an elite 1st rounder. Great value at 1.3. That first season of Eastbound & Down was so damn funny and memorable purely for that character. Danny McBride has the absolutely perfect look and persona for the role and you could argue him for 2nd best behind Tony Soprano. Paulie Walnuts in the essence of the Sopranos, so I don't mind that at 8th overall. Peacemaker I can't speak to, but the drafter argued his point well here. Stringer Bell in the 5th was a tough one for me. As a huge Wire guy, there were just way better characters. Stringer was a tough, feared, enforcer. But I'd argue Tommy Carcetti, Bunk, Brother Mouzone, or Lester Freamon were better characters.

I do not like Rust Cohle in the 1st round. Great performance, but it was one season. You've got so many other heavy hitters that were incredible for a longer period of time, including his 2nd rounder, Omar Little who is the most recognizable character from one of the most iconic shows in TV history. That is a steal at 7th overall and makes up most of the ground for the Cohle pick for me. Going Succession Round 3 is a bold play, but the upside is so high as there is plenty of time left. In the 4th round, Cassie Howard is an admittedly horny pick, but this is not TV, it's HBO! Gotta respect that selection. KFC also calling this the most creative pick in the Draft shows the respect this pick got in the room. A 3rd Soprano's character is very deep, but for a show regarded as one of the best ever, I don't hate it in Round 5.

Band of Brothers is such an old show that doesn't still resonate, I think taking a niche pick Round 1 is a poor strategy. Arya Stark was a huge part of GoT so I can't fault that pick in the 2nd. Rue Bennett has barely been alive vs. the rest of the cast, so this is another bet on upside pick. Stevie Janowski and Johnny Drama are great picks in Rounds 4 & 5 really save this Draft for me. It's a deep team, but not a top heavy team, which unfortunately cost Team 5 on the poll.

Who do you think won this week's Draft? Vote below: