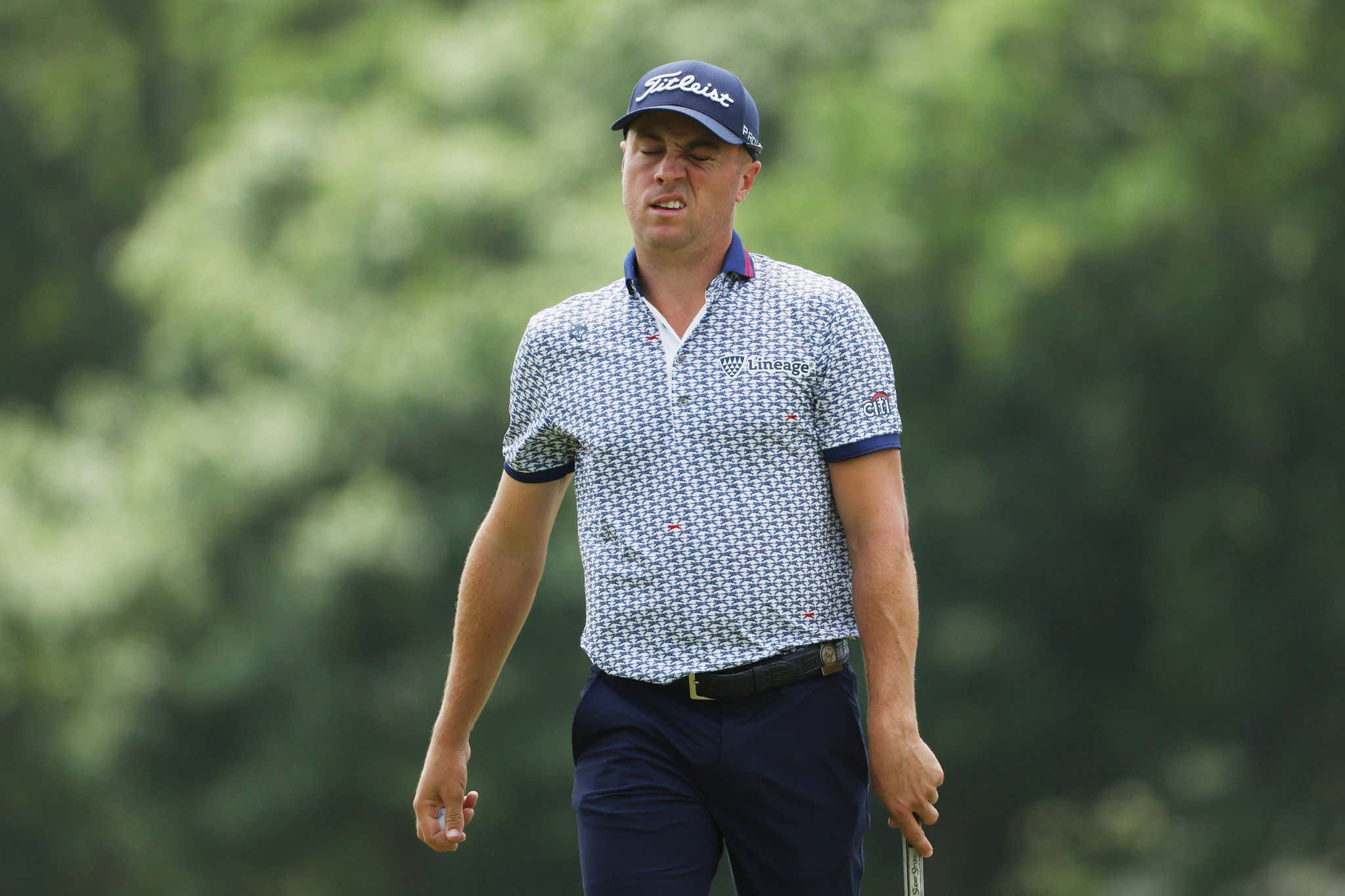 Justin Thomas probably should've been on the lookout for some sort of fuckery when he got his third round at the 2022 U.S. Open underway Saturday and the starter/opening tee announcer couldn't even get his name right.

JT just won the PGA Championship for the second time. How the hell do you not know who he is? LOL. I would've said this incident was worthy enough to post about alone at first brush. Turns out, it was a mere precursor to what would unfold on the par-4 fourth hole.

After Thomas began his day with a few solid pars, he piped a tee shot down the middle of the fairway, only to be obstructed by a storm drain. I don't feel like getting granular and looking into the USGA rulebook just to put on some pretense of authenticity by giving you the Rule Number, paragraph and letter of the law. Long story short, Thomas didn't take relief from a storm drain, proceeded to duff the shit out of his wedge and ultimately made bogey. He was none too pleased.

You ideally don't want a star player popping off like this with a hot mic around, but come on, it's great entertainment and adds an exciting edge to a traditionally uppity sport.

The rules-based technicality Thomas is railing against is that, since that drain wasn't impacting his stance nor his swing, he was unable to get relief from it. His whole point was, certain players with less integrity and a healthier helping of pedantic gamesmanship would've been adamant about their inability to hit this shot.

LIV Golf, enjoy having Bryson on your tour. Good riddance.

Back to the main topic here: Thomas is even further validated because he legitimately could've hurt himself upon finishing this swing. I'm not sure if the drain had any effect on the contact JT made with the ball, nor am I some sort of irrigation expert. Nevertheless, that seemed like a needless, dangerous situation that could've been avoided if Thomas were afforded the benefit of the doubt and luxury of moving his ball about five feet in either direction.

To update this from earlier: Thomas allegedly did call in a rules official to seek relief, likely knowing it wouldn't be granted to him since he's not a bold-face liar who could argue he deserved a better lie. Requesting a ruling slows down the pace of play, which is already a rampant problem in professional golf. Thomas probably just wanted to get on with it and not make a huge protest out of the ruling in the moment. Good on him.

Still doesn't take away from the main lesson, which is, as always: The rules of golf are dumb a lot of the time. Way too stringent, literal, trivial and multiplicitous. It's like the NFL's catch rule, except there are like 50 of those in golf. JT actually went above and beyond to honor the rules here and got punished for it. Meanwhile, as you saw above, Bryson does shit like he does.