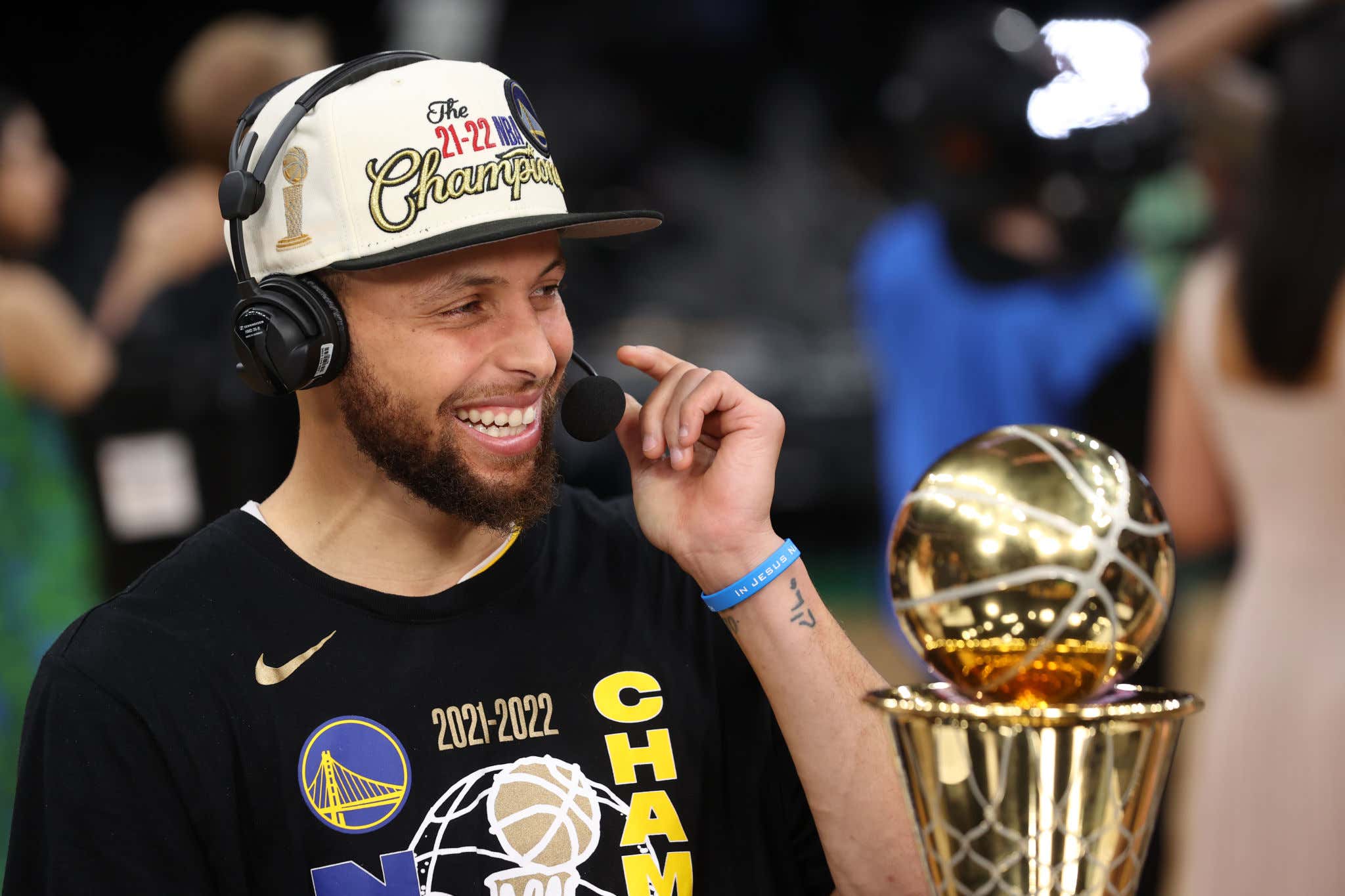 Classic recency bias is at play here, but then again, the Golden State Warriors have now won four championships in an eight-year span, so I think they've earned the benefit of the doubt as +600 title favorites until they're knocked off their throne.

For the first time since 2019, Golden State had its trio of Steph Curry, Klay Thompson and Draymond Green healthy for a playoff run. They proceeded to lead the Warriors to another Larry O'Brien Trophy, knocking off Boston in six games to cap it off. 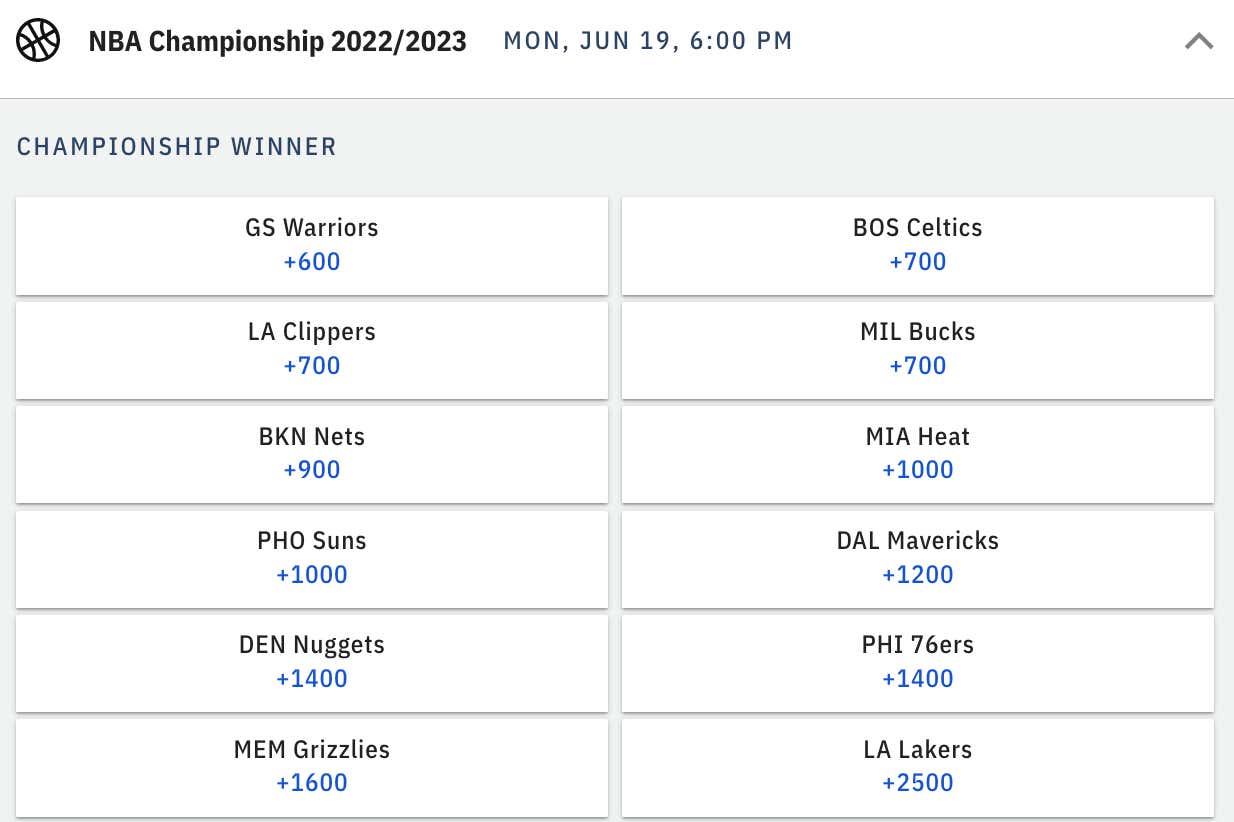 Bookmakers are bullish on the Celtics' chances of bouncing back. They did exceed any reasonable expectations this season, to be fair. With a new head coach in Ime Udoka, the same core in place who couldn't get over the hump before and Udoka's predecessor, Brad Stevens, moving to a front office role, it didn't seem like Boston had the makings of a conference champion. To their credit, the C's rallied from a rough start, became an absolute force on the road and are suddenly ahead of schedule.

One of the adversaries the Celtics beat en route to the NBA Finals was the Milwaukee Bucks. Knocking off the 2021 champs in seven games during the second round was impressive. Bucks fans will argue they would've won handily and had a real shot at a repeat if Khris Middleton wasn't injured for that entire series.

To me, the overrated group features the Clippers (+700), Nets (+900), Suns (+1000) and Lakers (+2500). Correct me if I'm wrong, but isn't the Clips' best player, Kawhi Leonard, someone who's been extremely injury-prone and has barely played basketball in two years? I mean, we saw Klay Thompson come back for Golden State and be a big contributor, and speaking of Brooklyn, Kevin Durant has managed to weather multiple major injuries and still perform at an elite level.

The difference with the Clippers' Leonard is that he's a total enigma, wrapped in a riddle, shrouded in mystery. He does seem to be all about ball, yet I'm not entirely convinced Kawhi is the veteran leader who can lift this historically bad franchise to its first-ever championship. That said, if Kawhi and Paul George are healthy and Tyronn Lue can continue working his coaching magic, I suppose it's conceivable to see a big step forward for the Clips. Acknowledging that, +700 feels undeserved — at least right now.

Circling back to the Nets: KD and Kyrie Irving are two of the weirdest personalities in all of basketball. As great as both of them are individually, they also have the Ben Simmons Circus in town. What a sideshow that whole situation is. Good luck to Steve Nash checking all those egos and pandering to his core All-Stars.

Deandre Ayton's cloudy future in Phoenix and the Suns' postseason collapse have me concerned about them. Chris Paul isn't getting any younger and broke down once again in the playoffs. Not sure why Phoenix is getting so much hype.

Finally, what is it with the Lakers? LeBron is entering Year 20. Anthony Davis seems uninterested in dedicating himself to realizing his full potential. Russell Westbrook's gargantuan contract is immovable, and he's an awful fit alongside LeBron and AD. No depth. No draft capital. What are we doing here? I guess basketball in Los Angeles is in good shape, eh?

Let's go with the Heat (+1000) and Nuggets (+1400). Miami has to realize its window to win multiple titles is now. They got a little snakebitten in the playoffs by injuries to Sixth Man of the Year Tyler Herro and veteran guard Kyle Lowry, yet still nearly made the NBA Finals. With one more big piece added to the puzzle — specifically, a dynamic perimeter scorer — I'd take a flier on the Pat Riley-Erik Spoelstra Heat at 10-1 odds to win the 'chip.

We also have Denver. Nikola Jokic has won MVP honors two seasons in a row, yet has little to show for it. He didn't have Jamal Murray or Michael Porter Jr. by his side. It's a wonder the Nuggets even managed a win off Golden State in the playoffs. Not to be an excuse machine for Denver…it's just that they haven't gotten the most favorable of postseason draws lately.

Although Porter's medical history is concerning, I think his back issues will finally be kept at bay for 2022-23, and Murray will be eager to return and vault the Nuggets into contention.

As for the rest of the teams featured in the odds at the top, I feel like the Mavs (+1200), and 76ers (+1400), even with James Harden being somewhat of a mess, are rated about right. The same goes for the Grizzlies (+1600), who have a deep, young team and just made a strong run to the conference semis. However, I need to see more from them before I'm ready to say they're legitimately in the championship conversation.

A long shot, but if you get an in-shape Zion Williamson added to the mix with Brandon Ingram and CJ McCollum, New Orleans could be downright scary next season.