The stories have been written about Tommy Pham slapping Joc Pederson over a fantasy football quarrel and Pham calling Trout "the worst commissioner in fantasy sports". Well, Commissioner Trout was asked about that the other day during a broadcast and said they had "something brewing" for the 2022 fantasy football season.

Breaking: I’ve been invited to join this fantasy league.   I have accepted.  I’ve also been put in charge of finding a new commish to replace Mike Trout.  I said I will assign “dork who works for me to be new commish”.  They’ve agreed.  I also requested higher stakes.

Moments later I got a text from Dave with an offer to be a Commissioner of the league.

I couldn't have accepted faster. Now as far as actual logistics, I was a bit in the dark. I asked Dave to put me on a text or email thread with the guys as he wasn't able to answer most of my questions as Dave is a new member of the league as well.

I introduced myself to the group. 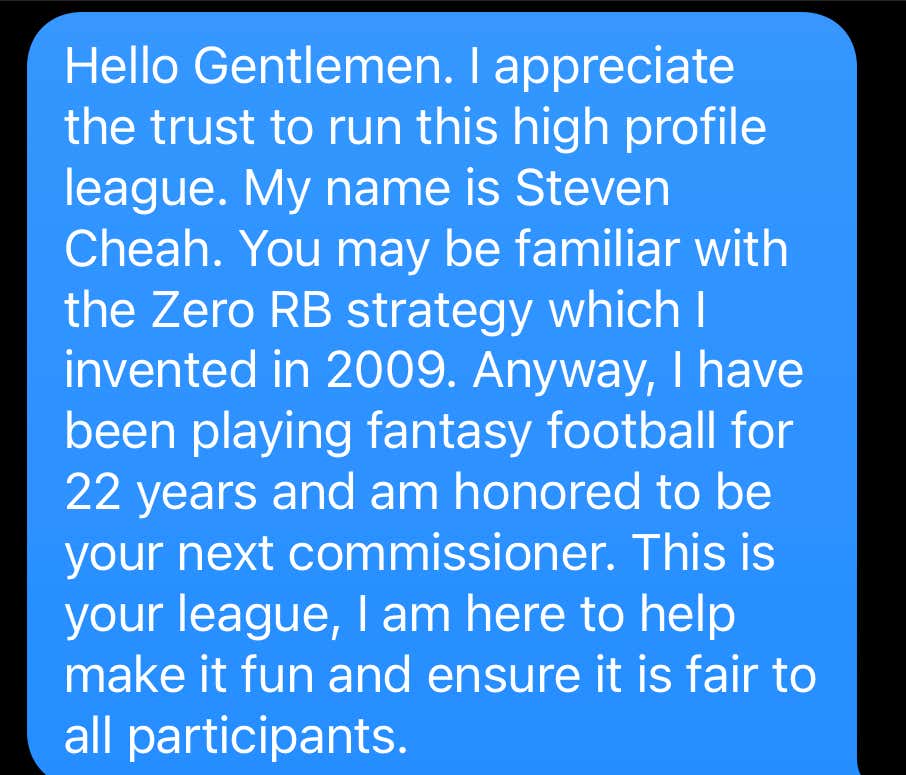 They all seem like great guys, just initiating the new guy while poking some fun at him. You know, just guy stuff.

However, I should say, I know absolutely nothing about Major League Baseball and it's players. I said about a month ago I don't think I could name more than 10-12 active players. Moments after being put on a group text with 12 of the best baseball players on the planet, this became painfully obvious.

After Dave put that screenshot on the fantasy league group text, more razzing from the larger group ensued. But I took that one on the chin like I should and moved forward. I've got a lot of work to do! But tonight was very productive in my very few hours on the job. In fact, I've already gathered some key details like draft type, roster sizes, general scoring info, and free agent/waiver process.

It's all fairly standard stuff, but we've got to iron out what platform we'll be using, draft dates, and some other key details. But it's only Day 1 and we've made some good progress with introductions and I've run through everyone's schedules to isolate some potential dates for a Draft. I'm very happy with the new title, so thank you do Dave for thinking of me and Mike Trout and the fellas for being open to the idea. I've also got a groundswell of support from the office, so I hope to do them proud!

Next stop for this league: The Moon.