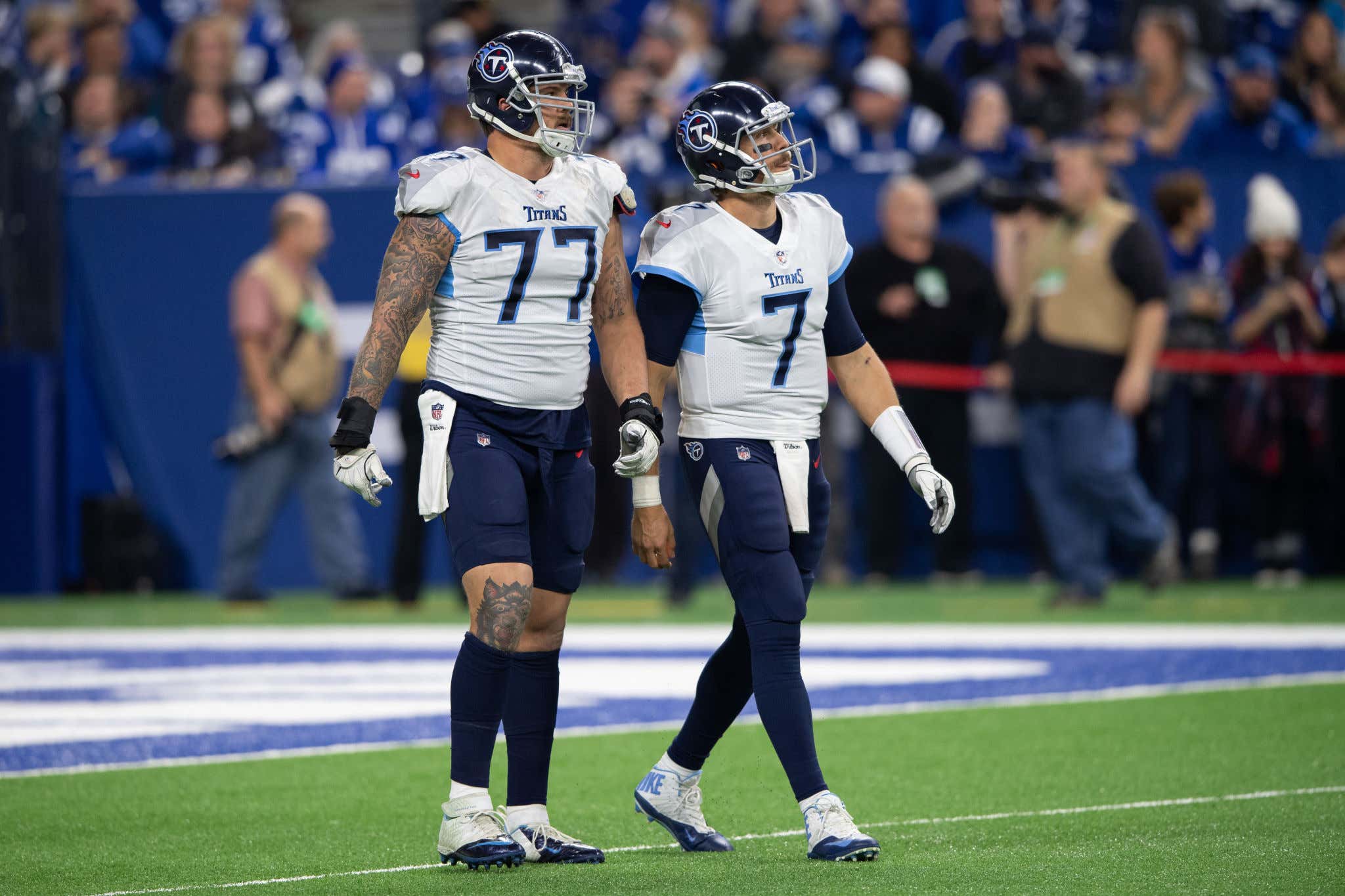 Taylor Lewan has seen some quarterbacks come and go during his career with the Tennessee Titans. Since entering the NFL as a 2014 first-round pick, Lewan has blocked for seven different starters, including former Jacksonville Jaguars No. 1 pick Blaine Gabbert. On Bussin' With The Boys, Lewan detailed Gabbert's cocky mindset when he was pressed into duty for Marcus Mariota. What ensued in both these situations against the Indianapolis Colts is some of the highest NFL-related comedy you'll hear all offseason.

I wasn't sure which pre-interception quote was funnier. "Boys, I'm about to dice these kids up, you guys just watch!" is great because the wily veteran Gabbert calls the Colts "kids", only to literally throw the ball right into rookie-at-the-time linebacker Darius Leonard's gut to give Indy tons of early momentum with a turnover. Everything snowballed from there and led to a 38-10 road loss.

But I gotta say, the second story that I plugged into the headline is even better. Gabbert had a chance for revenge against Indianapolis in the regular-season finale at home, with a playoff berth on the line. He even had the audacity to go back to that irrational confidence well to say, "You boys just hold 'em up. Watch daddy sling it!"

Instantly iconic stuff right here. Say what you will about Blaine Gabbert being a bust. Dude is definitely comfortable in his own skin, has refused to ever give up on his dreams of being a franchise QB, and even when his teammates know deep down that he can't hack it, he'll still at least put on a good face and try to act like he's a first-team All-Pro. Even if all that makes him utterly delusional.

Although he went 2-1 in three starts for Tennessee during the 2018 campaign, Gabbert only posted a 74.9 passer rating that year across eight total appearances.

Now 32 years old — which doesn't even make sense since it feels like he's been around forever — Gabbert is still in the damn league somehow. I imagine it has something to do with the alleged "photographic memory" he had coming out of the University of Missouri, along with the obvious physical tools he had to be drafted 10th overall in 2011 by the Jags. Obviously, it didn't work out in Jacksonville because that organization has been a dumpster fire for most of the past decade. Even when he's gotten his shot to start elsewhere, though, it's not like Gabbert has lit it up whatsoever.

The one-year stint in Arizona with Bruce Arians right before his time in Tennessee has helped Gabbert stay afloat in the NFL. He's served as Tom Brady's backup in Tampa Bay over the past two years, signing on once again for the 2022 season. When Brady briefly retired this offseason, it was looking like Gabbert could take the reins of the Buccaneers' offense. I can only imagine Gabbert being in Tampa's huddle saying shit like, "Daddy's got this, boys. You'll never even knew Tom left!!" only to put up a season with approximately 15 TD passes and 22 INTs.

We could all use some of that Gabbert swagger, especially when we enter situations where, whether we realize it or not, we're hopelessly outmatched. Then again, might be a little easier to put on that front when you've already made millions of dollars and pretty much anything happening in your NFL career is playing with house money at this point.

bussin with the boys+ 3 Tags