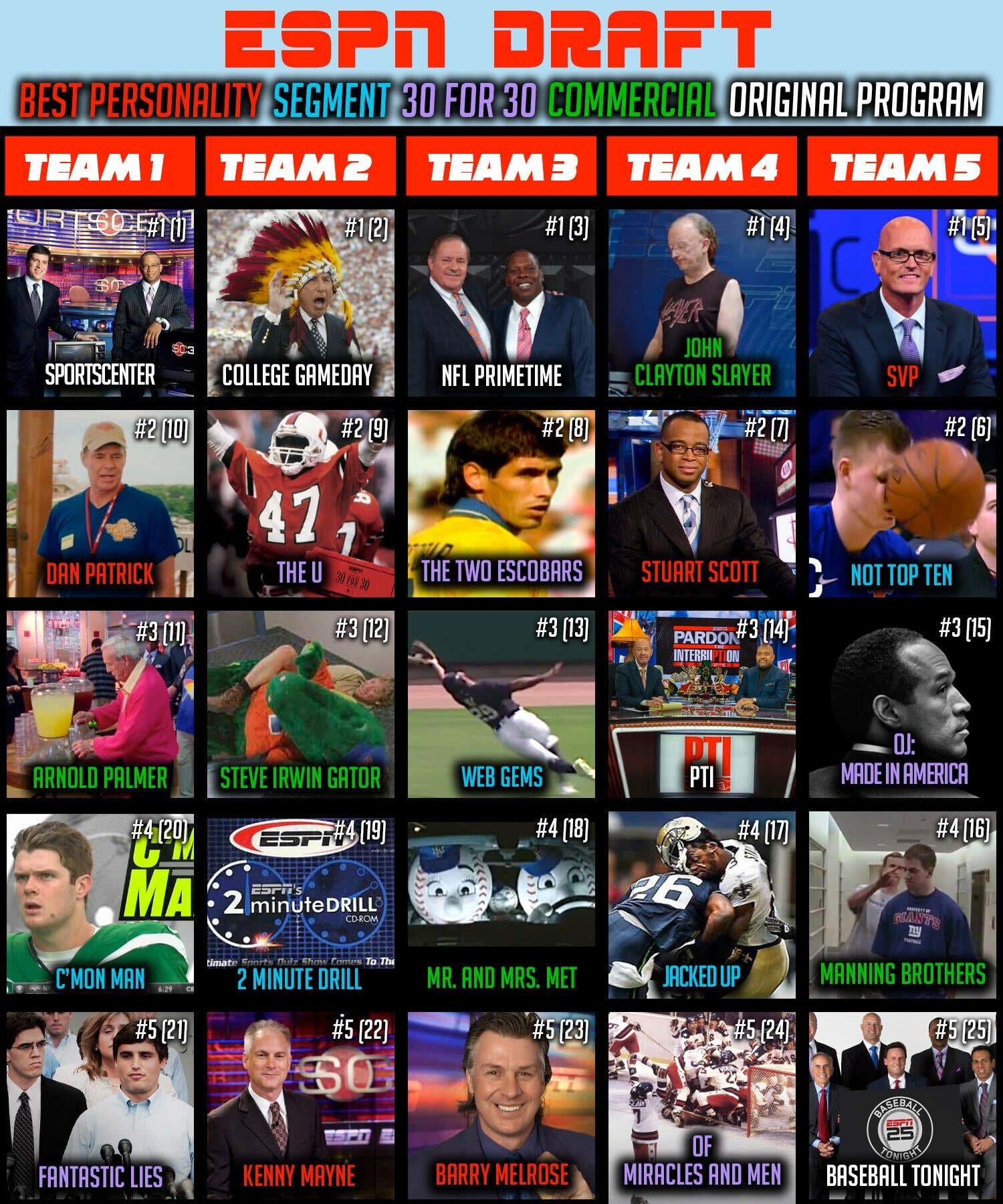 This week's Dog Walk Draft topic was the mothership, ESPN. The Chicago Guys and this week's special guest, Smitty would be responsible for drafting:

Being the Draft Guy at Barstool, I figured why not give Draft Grades for the Dog Walk Drafts? I checked with Eddie and he was cool with it, so I'll make this a weekly column. And this is a fitting beginning as I'm 36 years old and grew up in the heart of the ESPN era. I spent countless days watching SportsCenter re-run after SportsCente re-run, I remember PTI's debut and they subsequently owned my evenings for the next several years, I loved all the This is SportsCenter commercials, and somewhere out there in the world is a VHS tape of every 2002 Buccaneers highlight from NFL Primetime that season I manually recorded. So I feel particularly qualified to be giving out Draft Grades for this draft.

Getting the 1.1, SportsCenter is the most logical selection. SVP's version is better than I could imagine given the instantaneous ways we can get highlights now, so kudos to him, but in the 90s SportsCenter was MUST WATCH television every morning. It was your way of keeping up with the world of sports and people like Eddie, myself, and millions of others would watch re-run after re-run just to catch a sweet play from your favorite player or team again and again. Dan Patrick is a solid choice for personality, he was the lead guy really in the 90s, even is Stuart Scott took some of the spotlight. The Arnold Palmer This is SportsCenter commercial is where you lose me. There are so many better TIS commercials out there (including each one in this Draft) so at 2nd overall for that category, that's where this draft takes a turn. They even mention a bunch in the final segment that didn't get picked such as:

C'Mon Man is a great pick and an all-time segment, but no better than the 4th best in the Draft. Fantastic Lies, the 30 for 30 about the Duke Lacrosse Team scandal was an odd choice. So to me, this Draft really fell off after the 1st pick and it showed with the fans leaving it off the poll.

This is a strong draft with College Gameday being an absolute force for a long time. Revolutionizing the Saturday experience it's a strong 2nd overall. The U was a strong pick in the 30 for 30 in the 2nd round and Steve Irwin (R.I.P.) wrestling the Florida Gator mascot gets a chuckle every time.

The Two Minute Drill is basically the Dollar Store version of NFL Primetime, so getting that in Round 4 is good value. And Kenny Mayne was a tremendous pick in the 5th. He's an all-time ESPN personality. *The Mayne Event would be a sneaky good pick for a segment.

NFL Primetime is elite, no argument here. That being said, picking the third best of any category at third overall points is always a risky proposition. The Two Escobars is a great pick for the 30 for 30 and as a guy who doesn't particularly care for baseball, I LOVED Web Gems. Mr. & Mrs. Met is also a decent TIS spot, but again, you could argue there were better options on the board.

And as a non-Hockey guy, I really did enjoy Barry Melrose. I know Chief was hoping for Kenny Mayne, but Melrose is a solid selection with Mayne off the board. I'd say it could have been Melrose, Mike Greenberg, Stephen A. Smith, or Mel Kiper Jr. there. While this draft is good, I think there was some meat left on the bone.

John Clayton (R.I.P.) in the TIS Slayer spot was iconic. What's wild is he had an insanely successful career but he may best be remembered for that commercial. You could argue this could be a 1.1 pick in a coin toss with SportsCenter. The argument for it would be that there was never a falloff and it still plays. Stuart Scott was a revolutionary figure. The fact that he passed away is incredibly sad and he had so many fans. The tributes always got me choked up.

Pardon The Interruption revolutionized sports talk and sped up sports media to everything we know and love today. Wilbon and Kornheiser were the perfect pairing of guys who knew their stuff, but were also funny and relatable. It made consuming sports fun and you felt like you knew them. Jacked Up is probably the best or second best segment. The fact that we used to celebrate massive hits is something I miss about football.

I think Smitty actually used a brilliant strategy in waiting to pick a 30 for 30 til the last round. It's so subjective and there are a bunch, which I won't name in respect of the Chicago Guys doing a future 30 for 30 draft, but you could have picked from a handful from here and they're all similar tier. This was the best draft by a good margin in my opinion.

SVP is the absolute best. An easy choice for top personality. The fact that he still makes SportsCenter, a highlight based show, watchable in 2022 is astounding. The Not Top 10 is a good choice for top segment. Always super funny and still plays. It's a tough scene when you get a champion that puts on a 10+ week streak. O.J. Made in America was a good documentary, no doubt, but I think it lost a lot of luster as the FX show, The People vs. O.J. Simpson: American Crime Story came out at almost the same time muddies the water on it for me. The Manning brothers TIS spot is elite and a great choice as the 4th overall commercial.

Baseball tonight was a solid show and had a great cast highlighted by Karl Ravech, John Kruk, Peter Gammons, and Harold Reynolds, but there were others on the board that were arguably better. Shoutout to the Chief and Carl for mentioning NFL Matchup which was my personal favorite.

Those are my grades, but who do you think had the best draft? Vote here: