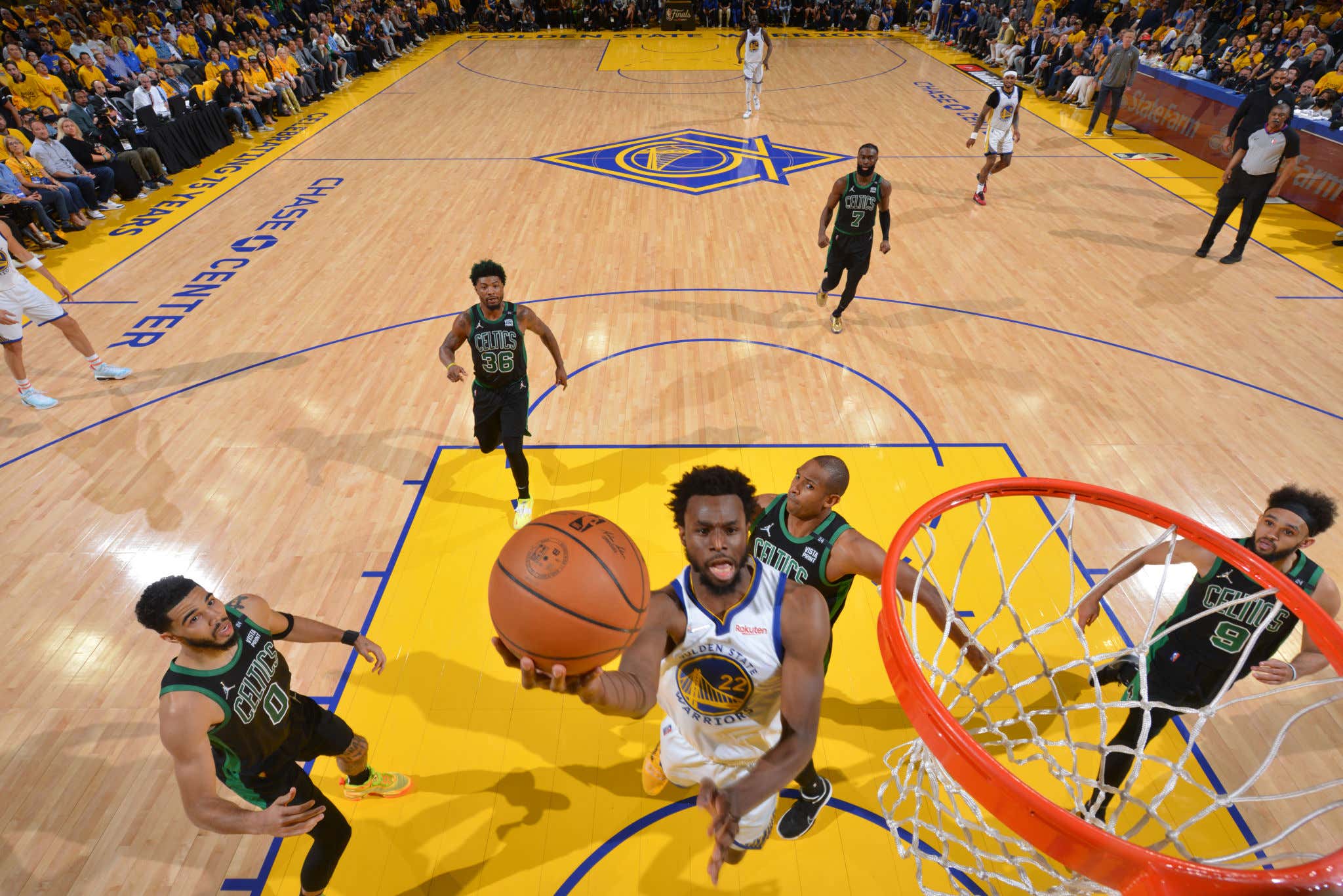 Andrew Wiggins is self-actualizing in real time during the NBA Finals, and it couldn't have been better-timed for the Golden State Warriors. They desperately needed someone to offset their disadvantage in the frontcourt against the Boston Celtics and a guy to bring competitive tenacity on both ends of the floor. Well, Wiggins provided both of those things in spades over the Warriors' past two victories.

After a career-high 16 rebounds in Game 4, the former No. 1 overall pick played 43 minutes on Monday with 26 points, 13 boards, four assists and two steals in Golden State's 104-94 win. Now, the Dubs are only one win away from their fourth championship during the Steph/Klay/Dray era.

Stephen Curry has been the best player throughout the Finals, but after four incredible performances, he was due for a downer at some point. That came in Game 5, as he misfired on all nine of his 3-point attempts. The Warriors couldn't hit the ocean from the beach most of the night on long-range shots, as Wiggins went 0-for-6 in his own right. However, in a low-scoring grindfest between the NBA's two top-rated defenses, Wiggins' aggression inside the arc as a scorer (12-for-17 shooting) and his cleaning the glass to prevent second-chance opportunities for Boston made all the difference.

Wiggins scored 20 of his points in the paint, lifting Golden State to a decisive 50-35 edge in close-range scoring. His defense was instrumental in the Warriors opening an early 16-point lead, too. Throughout Game 5, Wiggins forced the C's into 11 missed attempts from 12 feet or closer.

During his stint with the Minnesota Timberwolves — you know, a bastion of stability in NBA franchise lore — the knocks on Wiggins were that he wasn't competitive enough, didn't truly love the game, shied away from big moments, etc. Let's just say he wasn't set up for success there. And let's just say any demons Wiggins was battling that were holding him back have been pretty much vanquished at this point.

Granted, it helps to have three historically great and accomplished players flanking you like Wiggins does in Golden State. You still can't deny that something has been unlocked in this dude that was there but simply dormant. There couldn't be more pressure or a bigger stage than the NBA Finals. Wiggins is proving he belongs, and that at times, he can be the actual best player on the court in a championship matchup, which sounds crazy until you remember, "Oh yeah, he was a No. 1 overall pick!"

Even sweeter, the Toronto-born Wiggins is making national history in Canada!

I don't think Wiggins can do enough to unseat Steph as the Finals MVP favorite, presuming the Warriors close this thing out. Curry was too good in the first four games, and it wouldn't feel right to have another Andre Iguodala MVP situation like what happened in 2015.

No, Wiggins didn't fully deserve to be an All-Star starter this season. What you can't really argue, though, is without his incredible contributions in Games 4 and 5 of the NBA Finals, Golden State wouldn't be on the brink of seizing the Larry O'Brien Trophy. Still only 27 years old, Wiggins is entering a contract year next season with the chance to either become a new Warriors cornerstone, or to get paid and continue reshaping his legacy elsewhere for the presumptive prime of his career. Either way, seeing Wiggins begin to realize his immense potential has been one of the better stories of the playoffs, and again, could NOT have come at a better time for the Warriors.