Pretty standard blog that I wouldn't think needs to be written until I saw the video above. But if you go out and see a security guard somewhere, please realize that they squeezed themselves into that undersized black shirt to make sure you go wherever they want you to go and do whatever they want you to do. You may be rolling with a badass crew that includes a guy with a fanny pack and a bearded ginger with a shaved head that has you feeling so confident in life that you will bark at a half dozen people.

But trying to fight security is like trying to fight Mother Nature or Grudge Dave. You will not win. Your loss may not be immediate but sooner or later, the L will be hung on your head.

That is especially the case if said security guard is a former heavyweight boxing champion that won multiple titles during his career. Sure he may be 57 years old now and most of the titles were of the European variety that sound like something from the WCW back in the day.

However anybody with fists of fury that was once crazy enough to get into a ring with Mike Tyson and was strong enough to have the word SECURITY put on his back will almost definitely leave you like this. 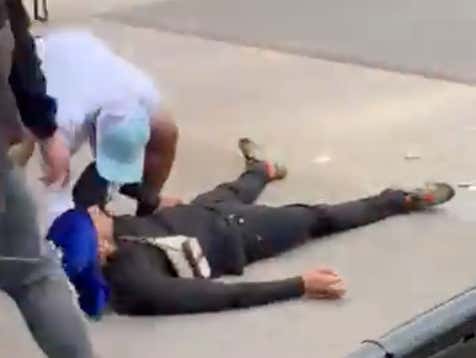 That concludes our lesson for the day. Hopefully people learned something or they didn't and we will get more viral moments like this since fight videos always do big numbers.