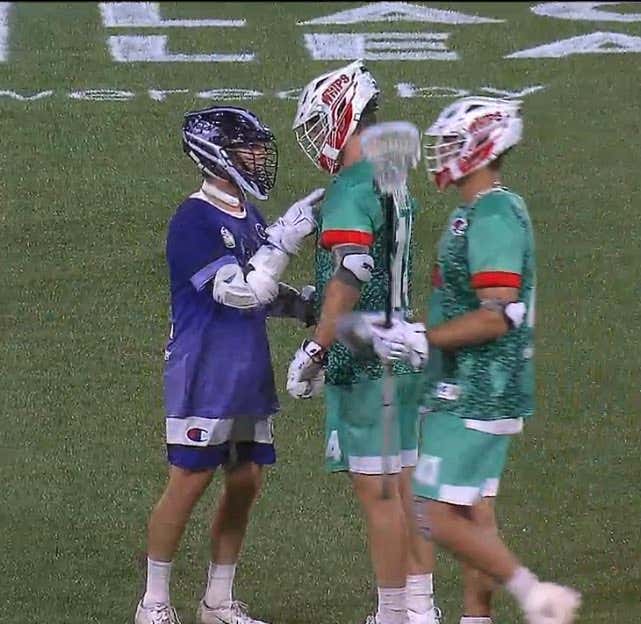 It's hard to come by wins in the Premier Lacrosse League. There are only 8 teams in the league right now so every single one of them is stacked. It's not like other pro sports leagues with 20-30 teams where you'd have guaranteed wins on the schedule like the Cincinnati Reds, Jacksonville Jaguars, Arizona Coyotes and OKC Thunder. Every team is good and every team has the ability to go out and win on a weekly basis.

Except for the Waterdogs. Not because they don't have the talent to do it. But because they simply love to lose. Most athletes will tell you they "hate to lose more than they love to win". Not the aqua pups, though. These bastards will find a new way to lose if it's the last thing they do.

But that's not Waterdogs lacrosse. So they let the Whipsnakes slowly slither their way back into the game with a few goals from Jay Carlson. Next thing you know, the Whips take the lead. The Waterdogs are able to tie it up to give the fans in Charlotte some free lacrosse. And then that's when Brad Smith delivers the dagger to send the Waterdogs down to 0-2 on the summer so far.

A loss like that has nothing to do with talent. It has nothing to do with schematics. It all comes down to accountability to blow a lead of that size. And accountability starts at the top. If ownership isn't holding anybody accountable here for the Waterdogs' failures and shortcomings, then how can you expect anybody on the team to? I know we have a ton of awesome new Waterdogs merch in the store, which you can buy right here.

But I think we need to add one more shirt to the collection. A "Sell The Team" shirt. Because until ownership changes over, I don't see any way we don't get the same results out of the Waterdogs year after year. If The Crease Dive needs to take over the squad from Pardon My Take, I'll start the bidding at $73.

Elsewhere around the PLL this past weekend…

- The Redwoods are a disaster. 0-2 on the year with a scoring differential of -15. They're in desperate need of a roster overhaul. Too many guys who need the ball in their stick to be effective offensively. Might want to work a few finishers into the mix.

- Atlas are LOADED. Thought the Cannons were going to give them a run for their money on Saturday. Pretty sure they had a 3-goal lead at one point. Then the Atlas offense remembered it's literally impossible to stop them and they started to pour it on for a 16-8 final. It's scary how quickly they can completely takeover a game.

- Chaos should be fine moving forward once the NLL Finals wrap up. They are 0-2 on the year right now but they had their fair share of chances to win both of those games. Once you add the Bandit boys back to the lineup, that team is going to go.

- Belichick to the PLL. Sooner than later. He has to be bored with the NFL at this point. Let's make it happen next summer.

- Make sure everybody is tuned in on June 25th for Jake on the calls.

Those Saturday games will be Cannons vs Chrome at 6pm, and then Archers vs Atlas at 8:45pm. Both on ESPN+.