We've seen this play out before. An upstart league comes out of nowhere, throwing giant paydays around like a drunken sailor on leave, buying up top talent and upsetting the established order. Among other franchises, the Big Bad Bruins of the 1970s were decimated by the WHA. The ABA made stars out of guys like Julius Erving, while inventing the gift that keeps on giving, the 3-point line. The first USFL swiped college legendary talent right out from under the NFL's nose like Herschel Walker, Jim Kelly and Doug Flutie. Eventually they were all either bought out, absorbed, or otherwise put out of business. But however the situations were resolved, it was done in boardrooms by people in expensive suits and lots of billable hours.

But until the corporate lawyers figure out how these rival leagues can, as the bumper stickers on Priuses preach to us, coexist, it can be anarchy. So when LIV Golf came along and flipped over the PGA's tables, it should've surprised no one that it would be pro golf Ragnarok. At least for a while.

What has been surprising is the degree to which both tours have cocked this up. These are supposed to be the smartest people in the room. True professionals who are as comfortable around a conference table reading a spreadsheet as they are on a green reading a break. But off the course, it's been pure Open Mic Night.

First, we look at LIV and how they've handled the questions they knew would be coming. First, before their tournament even began:

And again over the weekend, when a golf writer who just released a book about Phil Mickelson, the most well timed publication in the history of the printed word, showed up at his own expense to cover the tourney, only to run afoul of Greg Norman's hired muscle. 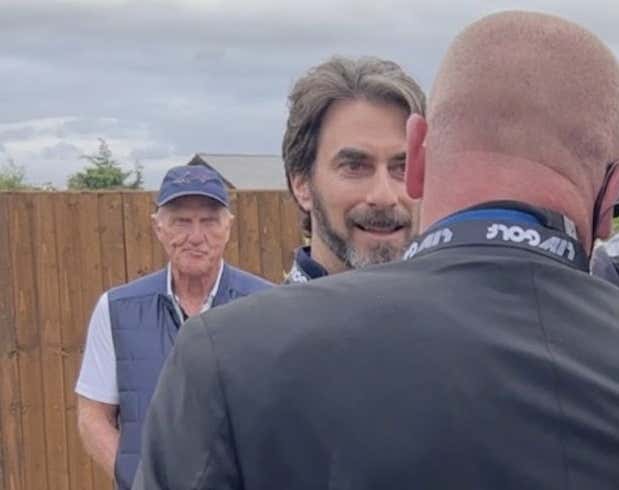 Putting aside The Shark pretending he knew nothing about his gendarmes rolling up on a reporter when he had the best seat in the house, just look at that face. He's a few strokes of a pet cat and matching jumpsuits on his henchmen away from being a full on Bond villain. If he'd only have done this in about four months half of us would have our Halloween costume all ready to go.

But not to be outdone, the PGA is answering with their own patented brand of hysteria. They might have a 92-year head start on their new rival, but they didn't spend nearly a century getting ready for this eventuality. Not by a damned sight. They've been caught flat-footed like LIV just walked up and suckered them in a bar. And not a thing everyone in the world has seen coming for months, if not years.

I mean, get a load of this from Tour Commissioner Jay Monahan:

I'll tread as lightly as possible when it comes to the families of 9/11 victims, because even 20+ years isn't enough time. All eternity wouldn't be enough if you lost a loved one. But the utter pious, self-righteous sanctimony out of Monahan here is as insufferable as it is hypocritical.

Is he saying that the PGA would never take money from a corrupt regime? Because they have. And do all the time. Including from the Saudis. Who might be perfecting the art of running an evil, double-dealing monarchy that tries to hide their crimes against humanity behind sportsball games, but by no means did they invent it. And if the people behind LIV wrote their checks to Monahan's tour instead of creating their own, are we for one hot second supposed to believe that he'd say, "Gentlemen, would could take the Saudi's dirty, immoral money. But that would be wrong. I strongly advise we not increase our revenues with these vast sums"?

No one in sports - or life - is pure as Caesar's wife. This world is too wicked to start splitting moral hairs and trying to act like you alone are above such petty, earthly concerns like profits. There have been too many Olympics and World Cups in host countries with slave labor, openly racist laws and where the party is not only over for gays, it was never allowed to start. So is Simone Biles answerable for "sportswashing" for these governments? What about Johnny Weir, who covered the Sochi Games for NBC? Guys like Lebron James and Steve Kerr are applauded for speaking out about societal ills they're passionate about in the strongest terms. But ask either of them about China, and they turn into middle schoolers who have to do a report in front of the class on a book they never read. Suddenly they don't know a thing about the place, other than they have a lot of eyes to put on TVs and feet that could use a pair of expensive sneakers. Which also happen to be made there, for inexpensive waged.

Newcastle United FC in the English Premier League is owned and operated by the Saudi government's Public Investment Fund. Does that make every player who plays for or against them, plus anyone who watches the league, for that matter, complicit in a terror attack from two decades ago? Or does that only apply to Phil Mickelson and Dustin Johnson?

Hell, if you want to get preachy about an entity doing business with the Saudis, look no further than these United States of America. The President is going there shortly to ask them to sell us more oil. And while he's there, maybe sell them an advanced billion dollar weapons system or 20. But Charl Schwartzel can't double what he's made in the best season of his life in ONE TOURNAMENT:

… without Jay Monahan and his cronies talking like he signed his LIV Golf contract in blood and handed it to someone with a pitchfork and sulfur breath.

The Saudi government does evil things. That's not even a question that's open for debate. But they pay. The last place finisher makes over $125,000 for 54 holes. On Monahan's tour that no one has ever had to apologize for, they miss the cut and go home with nothing.

If we demanded the people who entertain us never take money that was made by people who do evil things - like horribly murdering journalists for example - there wouldn't be sports, movies, TV, music, or really anything. And once you accept that reality, it's supremely hypocritical to blame the guys who joined LIV for taking the cash. Just put out a better product, make the fans happy, and may the best tour win.

But in the battle of shitty public relations, I'm giving a slight edge to the guy who's invoking the worst terror attack in history to shame the golfers who left his tour. Be better, both of you.