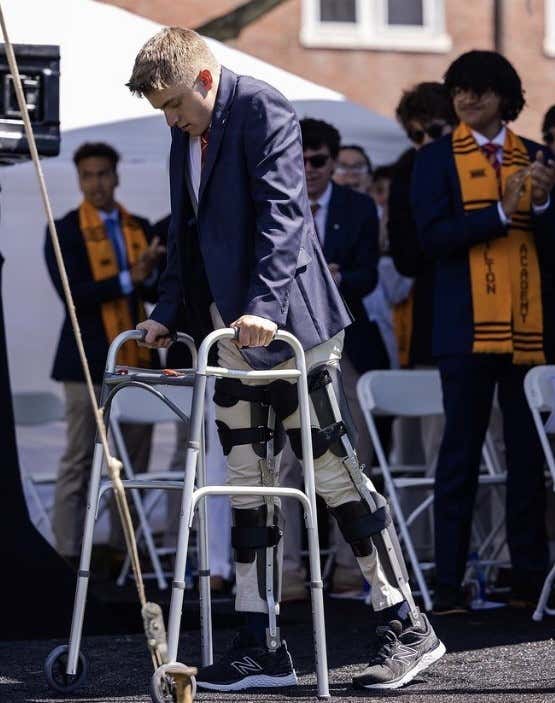 Over the 6+ years of making Spittin' Chiclets, I've been lucky enough to meet some hockey players that I most likely would not have met otherwise. The vast majority of them are great guys. Quite of few of them are badasses. And a handful of them are inspirational on a level beyond way beyond hockey. Milton Academy's Jake Thibeault checks all three boxes.

Just as his senior year was starting, Jake suffered a severe spinal injury during a game in September and would require a wheelchair for the forseeable future. I was told that he was a big fan of the pod and given his number so I gave him a call to shoot the shit and we made plans to catch up while he was staying in C'town to start his rehab.

Late November, I headed over to Jake's temporary Navy Yard pad at the historic ropewalk building to hang out with him and his incredibly awesome parents, Mike and Tracy. During our chat, Jake told me that his head of school visited him and Jake vowed to him that he will walk at graduation. Jake graduated yesterday. And thanks to his amazing dedication, strength, and working his ass off with often-grueling excercises, Jake kept his word.

Nine months after being felled by a terrible injury that took away his ability to stand, Jake Thibeault walked to receive his diploma. Absolutely amazing. I watched the video yesterday feeling equal parts amazed, inspired, and so goddamn proud of the terrific young man that I'm fortunate to call a friend.

Walking out of the ropewalk building after our first time meeting in person and hanging out, I had a smile on my face. It was something, frankly, that I hadn't anticipated doing immediately after visting a new friend dealing with a traumatic, life-altering injury and his parents. But after spending a few hours with Jake, Mike, and Tracy, and seeing their positivity, generosity, determination, and love while still maintaining their senses of humor, I couldn't help but smile.

If you'd like to help Jake and his family out with the many unexpected expenses that arise, please do.