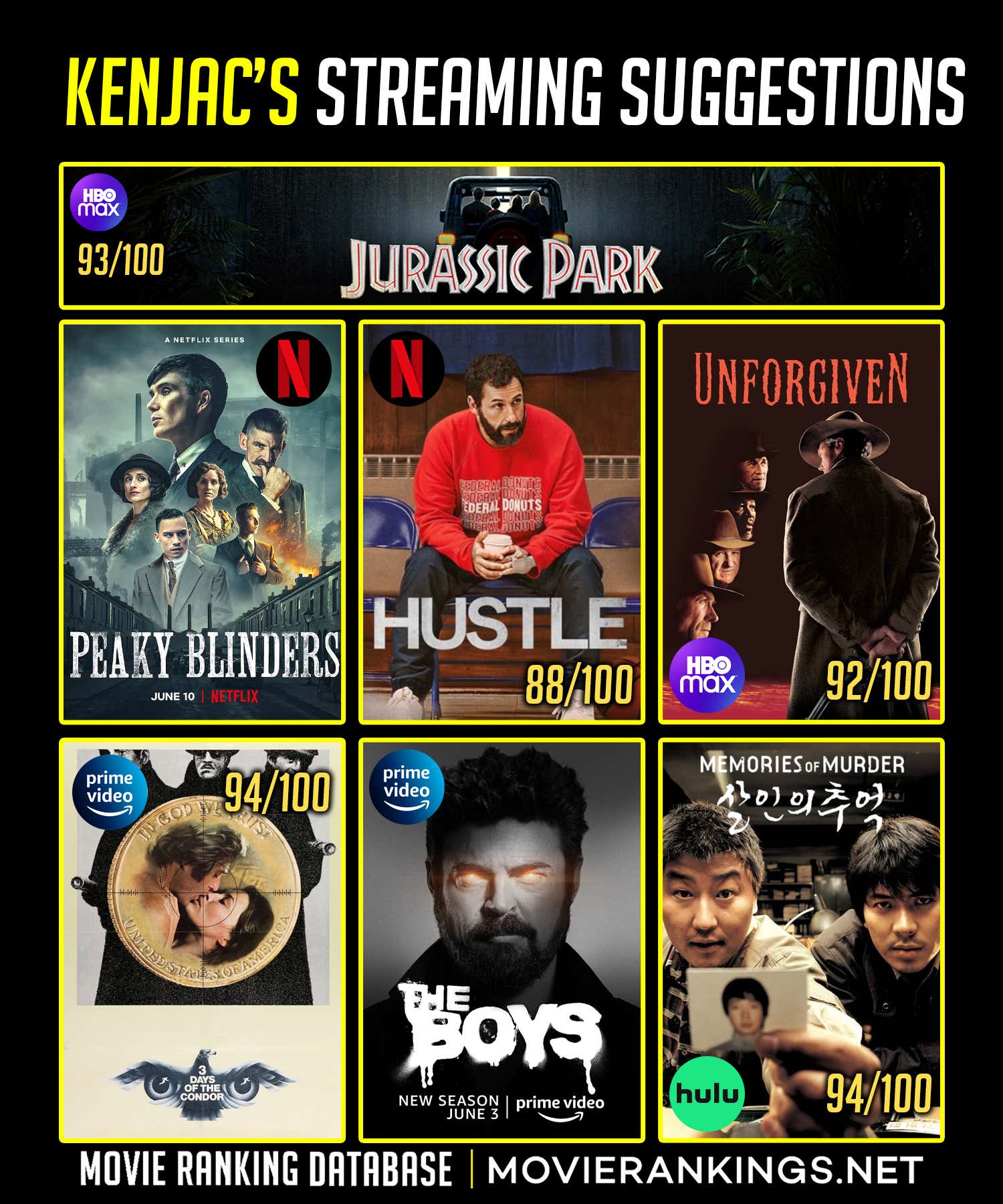 A gangster family epic set in 1900s England, centering on a gang who sew razor blades in the peaks of their caps, and their fierce boss Tommy Shelby. Thomas Shelby and his brothers return to Birmingham after serving in the British Army during WWI.

Peaky Blinders has been one of the most consistently good series running across the past decade. Season 6 officially dropped today and it is time to watch the conclusion.

There is a movie on the way and potential spinoff

Stanley Sugerman's (Adam Sandler) love for basketball is unparalleled, but the travel weary Philadelphia 76ers scout who has higher ambitions of being a coach remains stuck on the road looking for the next unknown talent. His search around the world leads him to Spain, when he discovers Bo Cruz (NBA player Juancho Hernangómez), an incredible streetball player with a troubled past. Stanley and Bo connect on and off the court, with their passion for the game and as loving family men who want to prove they can win, in basketball and in life. With the support of Stanley's wife, Teresa (Queen Latifah), can the underdogs come out on top?

I didn't know what expect from this movie, but I will note that I have been a believer in Adam Sandlers dramatic acting chops for a long time. Well, this movie fucking rocks. Sandler has a long storied passion for basketball which comes across on screen in a huge way.

A wealthy entrepreneur secretly creates a theme park featuring living dinosaurs drawn from prehistoric DNA. Before opening day, he invites a team of experts and his two eager grandchildren to experience the park and help calm anxious investors. However, the park is anything but amusing as the security systems go off-line and the dinosaurs escape.

The new movie blows chunks, so you may as well go back and cleanse your palate of this new trilogy with one of the greatest blockbuster movies ever made.

Without a doubt, this is one of the greatest westerns ever made. It also serves as sort of a swan song for Clint Eastwood in the genre he basically defined.

1986 Gyunggi Province. The body of a young woman is found brutally raped and murdered. Two months later, a series of rapes and murders commences under similar circumstances. And in a country that had never known such crimes, the dark whispers about a serial murderer grow louder. A special task force is set up in the area, with two local detectives Park Doo-Man and Jo Young-Goo joined by a detective from Seoul who requested to be assigned to the case.

This is a really good crime/detective movie from 'Parasite' director Bong Joon Ho. Personally, I love crime stories where the crime unravels slowly and almost painfully.

It’s been a year of calm. Homelander’s subdued. Butcher works for the government, supervised by Hughie of all people. But both men itch to turn this peace and quiet into blood and bone. So when The Boys learn of a mysterious Anti-Supe weapon, it sends them crashing into the Seven, starting a war, and chasing the legend of the first Superhero: Soldier Boy.

This espionage movie is probably my favorite among the older generation of movies. Robert Redford rocks in it as well.