You might have heard me say this once or twice so far this week but it bears repeating because that's my job. We had Stephen Schoch on Starting 9 this week to go through some of the big stories going into NCAA Super Regionals. Again, it's my job, but I strongly recommend checking out this week's episode if you're interested in watching some of these college games next couple weeks. The winners of the 8 series this weekend all move on to Omaha for a shot at the title. More on that later as for now we're just looking for a light refresher. 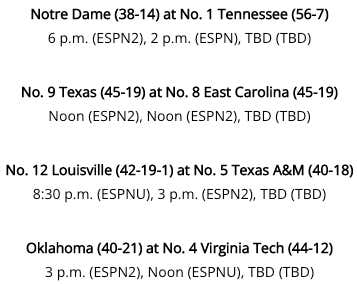 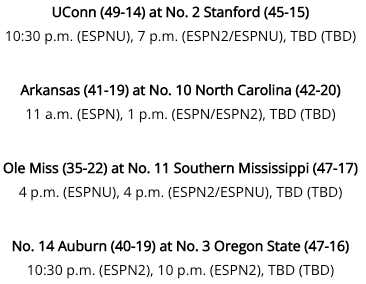 1. Catholics vs. Confederates -Tennessee & Notre Dame is all over my radar. The Vols have been the runaway #1 team in the country since basically day 1 and for good reason. The lineup is absolutely stacked top to bottom mixed with a stable of arms and by far the biggest Fuck You attitude in the country. It's hard for me to remember a team as dominant as Tennessee. Maybe the 2009 LSU Tigers that only lost to the University of Illinois at home en route to winning the national title? It's hard to say. But for now I know that the Volunteers are the surefire favorites to win the whole thing.

So was Arkansas last year. They won the first game of supers by 1,000 then dropped the next two vs. NC State and the season's over. LSU vs. Stonybrook a couple years ago. There's plenty of examples anywhere you look of devastating upsets against The Big Boys this time of year.

On that front, Notre Dame has a ridiculously deep staff that can actually compete for a 3-game series. That might sound insignificant but the truth is college teams struggle the most filling their innings. It's so hard to find, develop, maintain and retain a deep staff of reliable arms at the college level. The good ones leave early. The shitty ones stick around for 5 years and act like assholes. You're always running freshmen out to try and find the next big stud. It really is a clusterfuck - at least much more than the average sports fan would imagine.

That's why I'm not willing to sell ND down the river no matter how bad I want to right now. They actually have the talent and bodies to labor through a long weekend. By no means am I calling an upset, but this is Tennessee's last test before realizing the season-long goal, and I think it's a much harder matchup than first glance suggest.

2. Louisville vs. Texas A&M - This one's much more selfish than above so I'll keep it simple. Jake's college coach now runs Texas A&M while mine is the associate head coach for Louisville. Winner gets to throw us BP in Omaha so that's a nice wrinkle. Also cool for me knowing how bad Coach Snider deserves a National Championship. Needless to say we're cooking up a gentleman's agreement on the outcome. Jake suggested a tattoo but I don't want Aggie ink on my pasty white ass. This is a developing situation. But I'm still flagging it top 3 because that's exactly what it is two me.

3. Ole Miss & Ben Mintz - No surprise here but Mintzy is going to Omaha with us and he's bringing all his vibes with him. Only question left is whether or not Ole Miss is going to meet him out there? They were one of the last teams in the field and they've since responded by blowing the doors off their regional group. And now they make their way across the state to #11 Southern Miss for a chance at glory aka their first ever trip to Omaha. That alone is enough to circle the Ole Miss series.

Now mix in Ben Mintz in the flesh watching his Rebs, screaming HOTTY TODDY WHO THE HELL ARE WE and you're in for one hell of a weekend. And no disrespect to Brandon Walker, but I think Ole Miss simply qualifying for Omaha under these circumstances would create a more magical environment than Mississippi State afforded last year. Even as the champs. That's how strongly I feel about Mintzy realizing his dream and seeing his baby blue boys take the field in eastern Nebraska with a shot to win it all.

And if they don't, we'll just go back to the well. With or without Ole Miss, we'll be on our A game as expected