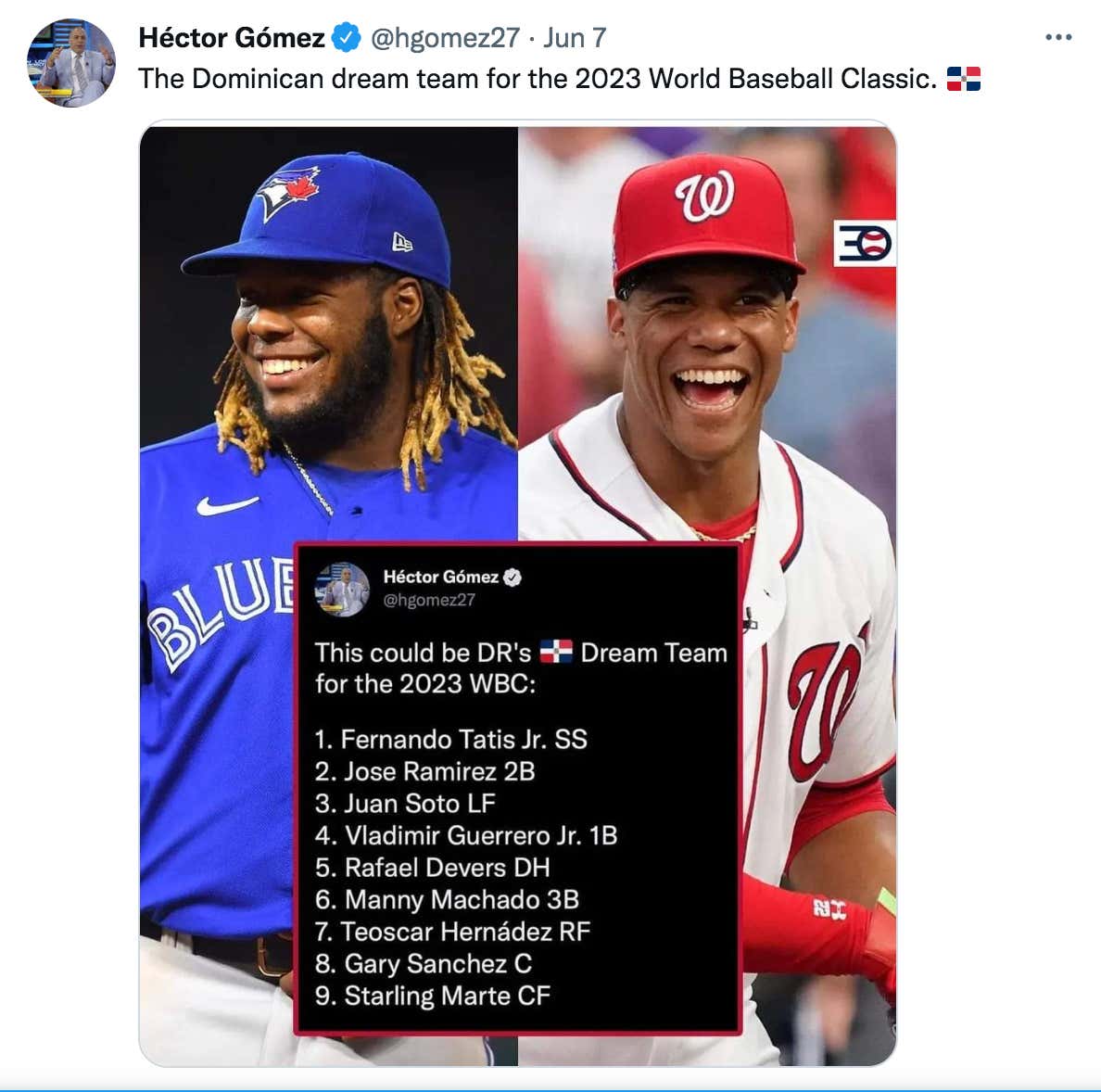 Nothing gets me more fired up than World Baseball Classic potential rosters, this one specifically. Hector Gomez tweeted out a projected roster and lineup for the Dominican Republic's potential 2023 WBC team and it is a sexual list. Quite literally an All Star team. A modern day Murderers Row lineup. For my money, the WBC is one of the cooler events in sports, has some Olympic vibes with the country representation, we get the stars out there, we get some awesome games, and the tournament somehow always delivers. The cream always rises to the top in these kind of events. Plus it makes it fun when these guys actually want to play, which they do. It's not like the Pro Bowl or something when we're scrapping the bottom of the barrel for guys to come out, these guys legit want to compete and represent for their country.

And it's no secret the Dominican Republic has some monsters to represent them. Just look up and down that lineup, 1-9 is a problem. Where is the weak spot in this lineup? I Guess Gary at 8? Sure, but then you turn around and Marte is right there. I mean starting off a lineup with Tatis Jr, JRam, Juan Soto, and then Vladdy? Good luck. These guys may score 15 a game. Manny Machado is your NL MVP right now and he's batting 6th. If this potential lineup actually happens it would be great, their games would be must see TV. They'd the story of the tournament, easily the team with the target on their back. Man do I hope all these guys agree to play, would make an already awesome tournament even more fun.

Someone fired back with a potential American lineup and they think it's better….I'm not so sure.

That team is good, very good, but I'm not so sure it's better than what the DR can throw out there. Need this to happen, need to see a clash of the titans between the DR and America, or any other of the power baseball countries. This is a baseball fans dream, the last WBC we had was filled with awesome moments, the Adam Jones catch vs Manny, the insane DR comeback, we've seen some great stuff come from these games, now I'll be waiting to see who commits to play and if we can get close to this dream lineup. Who wouldn't want to watch Soto, Vladdy Jr, Devers, and Machado hit consecutively? Would be great for the game of baseball.