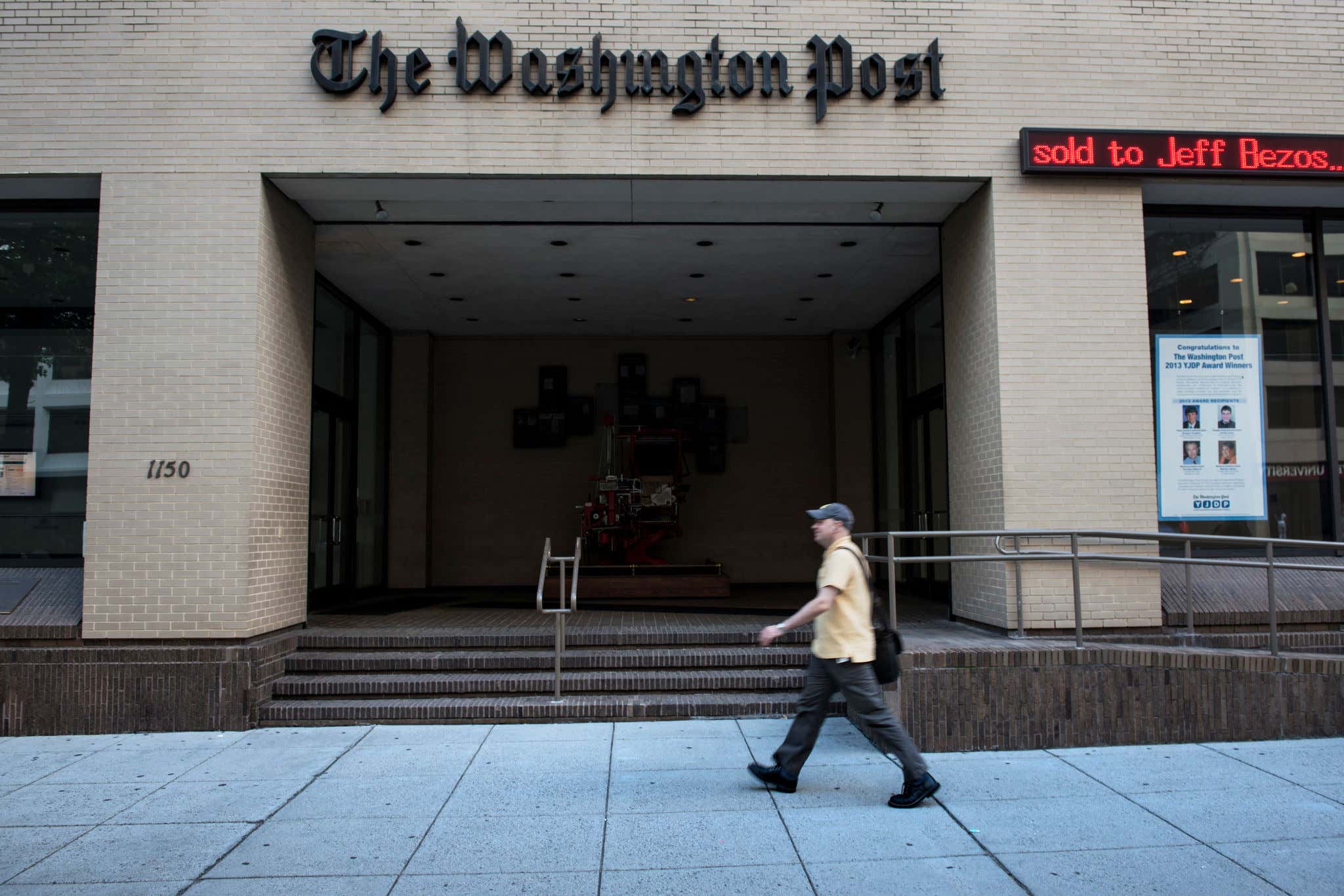 These's are tough times to be a Journo in America. Particularly in the newspaper business, a once proud institution that represented the highest ideals young Journalism majors aspire to. Subscriptions cratered as generations came to realize the old business model of getting your "news" a day after it breaks, printed on dead trees and tossed on your doorstep by a kid making minimum wage was akin to getting it from a town crier ringing a bell in the village square. Advertising revenue evaporated. Sunday editions that used to weigh 10 pounds and could occupy half your day are now not much bigger than that pamphlet your doctor gave you about how Erectile Dysfunction is nothing to be embarrassed about. When you Google your barely-surviving local newspaper, the first item the search bar prompts you to is the obituaries. And every death over the age of 70 represents another of their few remaining readers.

Few newspapers in American history have enjoyed as much acclaim as the Washington Post. A bastion of integrity for a century, known for more than merely breaking stories, but for writing, as the saying goes, "the first draft of history." WaPo's coverage of has shaped world events, brought ends to wars, and even brought down a sitting US President.

And what are the intrepid journos who call those hallowed halls their workplace up to now? With a world seeming to be spiraling out of control, an economy swirling the drain, prices skyrocketing, war, crime, homelessness, a supply chain crisis and a general sense of despair to report on, they are focused on the one issue that all Americans can truly relate to.

It all began semi-innocently enough. When one reporter retweeted a mediocre joke. The sort of thing that your average male of Boomer age (I raise my hand), gets texted to him 20 times in a typical day. And one of his fellow WaPo employees was not amused. 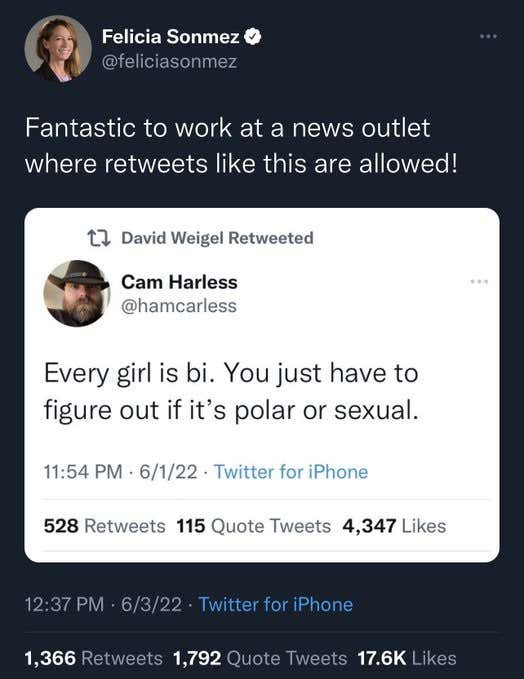 So Dave Weigel didn't engage in this bit of below average wordplay per se. This D+ joke wasn't his. But he did chuckle at it, considered it for a moment, perhaps weighed the mild, non-specific sexism at its core versus the needs of his Twitter followers to have a laugh as did he, put thumb to screen and shared it. Much to the chagrin of Felicia Sonmez, who screencapped it and strongly voiced her objection. Prompting the bosses at the paper to tell him that he and his whole Edgar Allen Poe pastiche would have a month off without pay so he could sit home and think about how not to offend Felicia Sonmez going forward:

Weigel deleted the offending retweet and apologized. But as the lawyers say, you cannot unring a bell. Not when the bell wants to remain ringing and offended. So the ringer is out a month's pay.

Here's where the plot thickens. In 2020, while every news outlet in North America was showing live footage of the smoldering wreckage of Kobe Bryant's crashed helicopter, Felicia chose the moment to remind her Twitter followers that Bryant was put on trial on a rape charge. Now, as you might imagine, when worldwide icon just died horribly alongside his daughter, a lot of people felt that the time to bring up the most negative aspect of his life is not while their corpses are still in the flaming wreckage. That there'll be plenty of time for character assassination later. Rightly or wrongly, they let the Post know they felt Felicia's remarks were, to put it mildly, poorly timed.

But at least one man in the office had her back. Guess who:

Still other people believe that if you have a problem with a co-worker, the way to handle it is to walk across the building, rap gently on the metal strip down the entrance to their cubicle and talk it out. Yet another WaPo employee expressed that to her.

But again, that is not her way.

This thread goes on, with more than a dozen Tweets from her. With charges of misogyny, talk of online bullying, examples of journalists being silenced. At some point apparently, Jose Del Real deleted his whole Twitter account, before coming back, guns blazin':

So now it was "I see your Denigrated Women, and I raise you my Marginalized Group." And who wins that pot is all in the eyes of the social politics beholder, I guess.

Regardless, Sonmez has been going all in. Full tilt, full time. Turning the volume up to 11 and breaking off the knob. Just Tweeting up a Category 5 shitstorm. Retweeting her supporters comments, firing back at her critics. Scroll down her timeline if you wish, but trust me, it's a rabbit hole that only an experienced social media spelunker should explore. I don't know how she's had time to eat or sleep. The DoorDash bags must be filling up her place like an episode of Hoarders, because she's barely had time to take out the trash.

Finally, management of the paper tried desperately to catch up to this thing. Maybe even get out ahead of it. But at the very least, to slow it down. But it's a runaway train with no brakes. They sent out a company-wide email:

Vanity Fair - [E]xecutive editor Sally Buzbee’s memo reiterating workplace policies and promoting collegiality among staff. The memo dropped following a few days at the Post that have been, as one reporter described it, a “clusterfuck.” …

In the Tuesday memo, Buzbee stated shared newsroom values and emphasized how employees should treat one another. “We do not tolerate colleagues attacking colleagues either face to face or online. Respect for others is critical to any civil society, including our newsroom,” she wrote. ﻿“The newsroom social media policy points specifically to the need for collegiality.”

And so the rank and file took to Twitter in droves, all showing their company pride. Which is to say, reciting the very thing they were told to say, in those exact words.

Do you get the feeling they think the Post isn't perfect, but they're proud because it's collegial and collaborative between them and their colleagues? It's like they all went to see the Amazing Alexander and came out to say they loved him, he was much better than CATS, and they'll see him again and again.

All of the colleagues are proud of how collaborative and collegial it would seem, with the exception of … wait for it … waaait for it … yup. None other than Felicia Sonmez. Like a one woman The Chicks, she won't back down and she is not about to play nice. Instead, she launched into a 16 - 16! - post thread (which has to be approaching the all time record) about the terrible, irredeemable awfulness of the people who keep her employed. Because one time she got upset after reading a bad news story:

And as an added bonus,, just to add insult to that injury, she mentioned how unforgivably white her bosses are.

I love it. As Patton said of war, "God help me. How I do love it so. I love it more than my life." I didn't think there was anything that could get me interested in anything going on in an American newsroom. Especially not the interpersonal goings on of the reporters who work there. But I am utterly fascinated by this. Mostly with Felicia Sonmez.

We are six days into this. And she is still going strong. I hate being in a Twitter beef that goes more than three or four exchanges. Once I hit that fifth, I get bored and tap out. She's still fresh as a daisy and I don't know where anyone could have the energy she does. She's like one of those Marathoners you see coming down the last few city blocks and they look like they just hit the starting line. I just admire the hell out of that Kook Energy she's bringing to this fight. It's intoxicating. At this point, I'm smitten by her and by this entire "clusterfuck." It's been six days, but let's all pray that it's Day 6 of many, many more to come. Because when journos go to war against each other, we all win. Keep it going. And Godspeed.