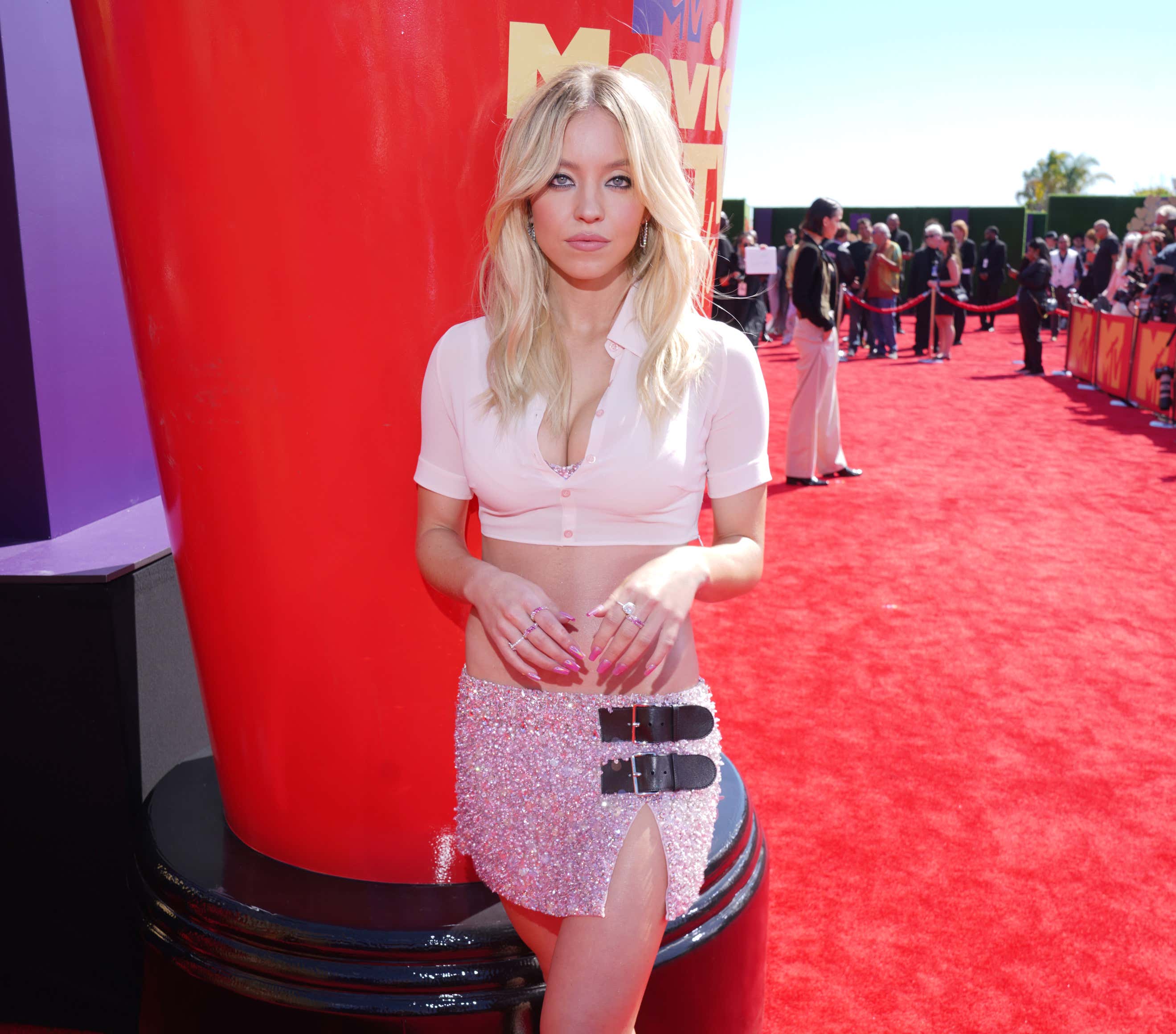 You might think that life as a 24-year-old super pretty actress on a popular show like Euphoria, going to awards shows, and enjoying the unwavering support of your family the way Sydney Sweeney does:

… would be heaven. That Sydney would be riding a gravy train with biscuit wheels. Free from the sort of pettiness and disrespect that the rest of us ordinary looking, less successful, unfamous dregs are forced to suffer on a daily basis. But you'd be wrong.

When Sweeney showed up to the MTV Movie Awards dressing the way she wanted to dress:

… she sparked the sort of furor that is all too familiar in 2022 among those with highly combustible furors:

Source - Sydney Sweeney had her toned midriff on full display at the MTV Movie and TV awards where she wore a micro-miniskirt paired with a super-cropped collared top by Miu Miu. While the low-rise trend has already been seeing a resurgence, the red carpet moment is triggering a response from people who'd like to leave it in the past.

"What in the early 2000’s is this?" someone commented on a video posted to WhoWhatWear. … Another wrote, "Not me thinking this was a throwback post."

Many likened the Euphoria star to Tara Reid, Paris Hilton and Elle MacPherson, who have worn similarly revealing looks in the past. …

"No shade to beautiful Sydney… but I'm sad we're seeing more of this ULTRA low rise waist and ULTRA flat tummy look again," one person commented on the Instagram post. "So coveted yet unachievable for so many of us with different builds."

"Watch body positivity go down the drain once the low rise fashion takes over again," and "Low rise NEVER AGAIIIN! Young generations: learn from the pst!! Don’t ruin your body!!!" wrote two others.

Similar sentiments have been expressed by body acceptance advocates … "This set is created with this very thin body in mind. It's not created for plus and so that in and of itself is frustrating," Gianluca Russo, co-founder of the Power of Plus, previously told Yahoo Life. "A lot of it, too, feels very glorifying of a body type that we've been working against actively for many years now." …

"Millennials currently having a collective panic attack at the prospect of fitting back into low rise bottoms and crop tops," one person wrote. "We’ve been through it, let’s not bring it back," another pled.

At the risk of doing the "So what you're saying is …" thing that I hate, so what they're saying is, because some people don't have the body type to look good in certain outfit the way 2000s Tara Reid, Paris Hilton and Elle McPherson did, and 2022 Sydney Sweeney most definitely does, that people who look amazing in it should never wear it. Have I got that right?

And by wearing it, super attractive women in tip-top shape and feel good about themselves are … what? Responsible if other women "ruin" their bodies trying to look as good? Or am I mischaracterizing the argument here?

So does this go for everyone? For example, I can't count the number of times I've seen Rob Gronkowski wear the shit out of a tank top or go Shirtless O'Clock at some beach party, and I wished I could look like that.

By this logic, we should all demand he stop showing so much ripped musculature and remain in a loose fitting baseball warmup jacket at times, lest he trigger us Dad Bod sufferers whose six packs are kept in a soft cooler. Same with every, single Chris in the Marvel Cinematic Universe. When Thor gets his clothes blown off at the end of the Love and Thunder trailer and is objectified by the female gaze, his look is so coveted yet  unachievable for so many of us with different builds. And if I end up in a hospital for gobbling up more PEDs than a Kentucky Derby entrant trying to look like Hemsworth, let it be on his conscience. He should've insisted they put in him in a bathrobe with his gut hanging out, like in Avengers Endgame so that I'd feel better about myself.

And that, I guess, is the illogical, yet inevitable, conclusion the whole body positivity movement has led us to. We don't want people to feel bad about themselves, which is a very noble goal. But rather than encourage them to work on their health and fitness - which is hard work - we've taken the approach of shaming the ones who are in great shape, which takes no effort whatsoever. Why have any agency at all when it comes to your body, when you can burn zero calories typing a sentence under an Instagram post of a beautiful actress dressing exactly the way she wants like a grown woman, and telling her to stop it. And the truly bizarre part of it is that if an actress with a body like Danny DeVito wore the same outfit Sydney did, these same people would be "YASSSS QUEEN"ing her all over the internet.

I agree with part of this. We do need to "learn from the pst [sic]." The very recent past. And the present. We've got a major, serious, and deadly obesity problem in his country. One that was exposed even more by Covid. We should be having "a collective panic attack" alright. But not over how good Sydney Sweeney looks. And with all due respect to the well intentioned people at Power of Plus, you're "working actively against" the wrong body type.