Billboard - Kenny Loggins was excited to record an updated version of his classic Top Gun adrenalin-pumping anthem  “Danger Zone” for the new Top Gun: Maverick reboot. And the iconic song about pushing it to the limit does in fact appear in the opening sequence of the Tom Cruise-led fighter pilot drama that just smashed box office records over the Memorial Day weekend.

But in an interview with EW, Loggins, 74, revealed that his song reboot ended up on the cutting room floor. “I did re-record ‘Danger Zone’ to make a 5.0 version that would wrap around the audience,” he said. “But Tom Cruise really wanted to conjure up the original version, the original feeling. So in the long run, it turned out to be the old track coming back.”

The director previously told EW that the intention all along was to tell the audience, “‘This is a Top Gun movie, we love it as much as you do… From there, our story goes in a very different direction, but I wanted the first few minutes to let the audience know: Don’t worry, we love it too, this is going to be a Top Gun movie.”

Loggins said he just found out last month that “Danger Zone” was going to be reprised in the opening sequence, then recalled the time he ran into Cruise on Jimmy Kimmel Live! 6 years ago and they had a chat about the franchise. “I knew he had the property at that point,” Loggins said. “I said, ‘So, tell me, is ‘Danger Zone’ in or out?’ And he said, ‘It wouldn’t be Top Gun without “Danger Zone.”‘ He stayed true to his word. When we first talked about it, they were thinking it might go in a scene in the middle of the movie or somewhere near the end where he comes to the rescue. Instead, Tom opted to use it at the beginning of the movie so that it really conjures up the energy and excitement of the original Top Gun.”

And though his new version got the boot, Loggins said he had no hard feelings. “It really does capture that vibe from the very first time [I saw it], 36 years ago,” he said.

Two weeks back I blogged about getting to see the new Top Gun movie and how awesome a job they did on it. 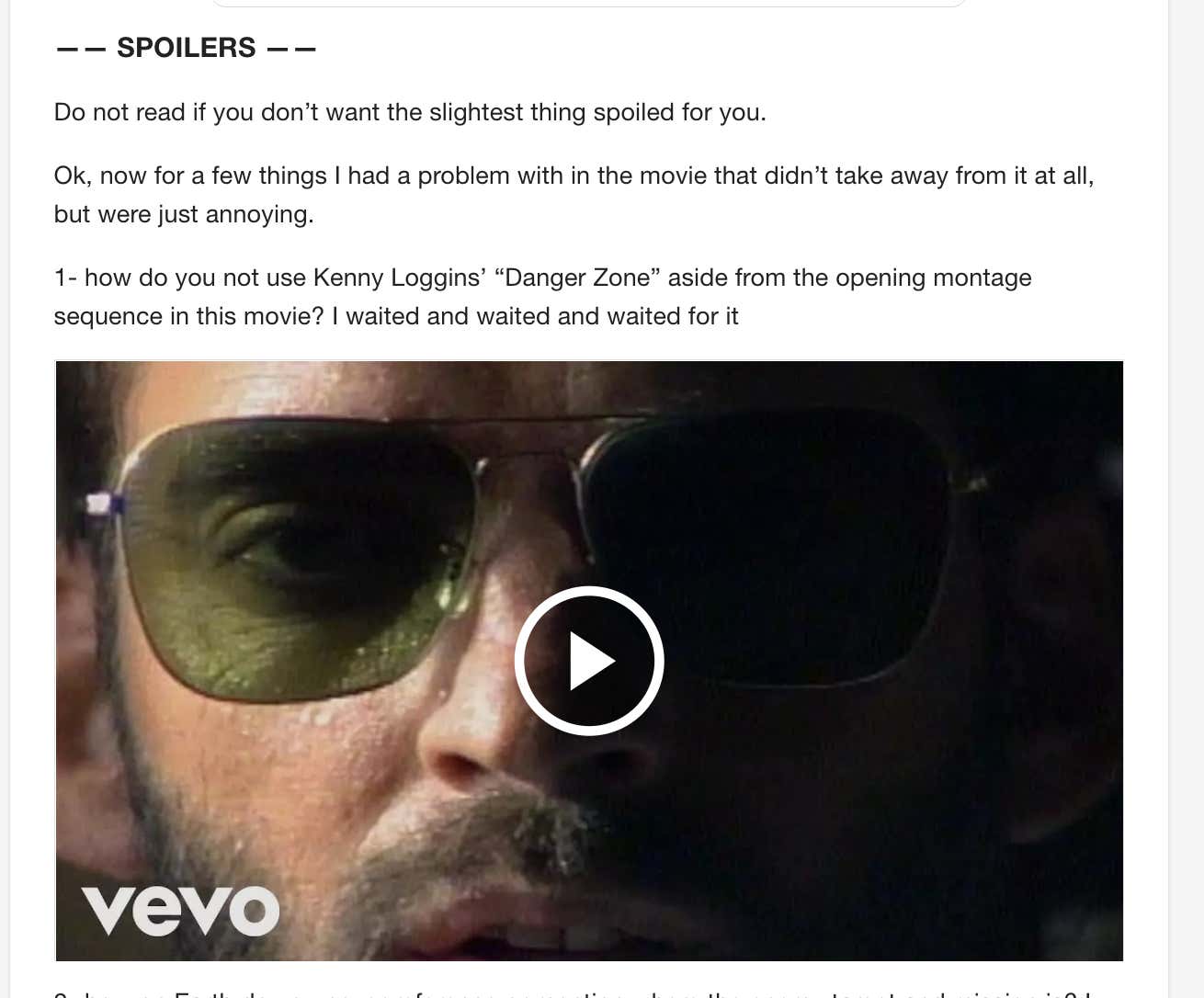 How in the world did you nail pretty much every single thing in this sequel and whiff on "Danger Zone"?

Not only that, but now coming to find out that Kenny Loggins did a new 5.1 Dolby Atmos version that "wraps itself around you" and slips it in slowly. (Paraphrased the last part there but we were all thinking it).

(Fun fact - Dolby Atmos is a fucking game changer and the future of cinematic and home cinema sound.)

Tom Cruise, who can be as weird as he fucking wants to be as long as he continues to pump out awesome movies, nixed this song for a reason.

My thinking is that Kenny tried a little too hard instead of just keeping it simple.

TMZ - The sequel, called "Top Gun: Maverick," is shooting down in San Diego with Tom Cruise back in the pilot seat and, when we got Loggins at LAX Tuesday, he told us he'd put some feelers out for the 2.0 version of the song.

Loggins wouldn't reveal who he's got in mind, but gave a bunch of clues. He also says he's cool with them taking the reigns on the song.

“So I’m hoping to do it, maybe as a duet with a young act,” he said. “I’d love to work with, well, there’s young and then there’s young. We have some feelers out to some pretty cool rock acts.”

I know I'm gonna sound like an old here, but I can't think of a worse idea.

There's a difference between re-recording something originally done in analog, probably on reel to reel, using today's digital technology and improving the sound, and altering the entire life of the song by adding a different artist or letting one cover it completely.

Either way, now we not only all want to hear this new version, we need to.