Splash hits are always exciting in San Francisco, not only do we get to see a ball absolutely launched into McCovey Cove but it also means we get to see the kayakers fighting over the ball. It's the highest form of entertainment. Charlie Blackmon laced this ball deep into the night and way into the cove and the second it left the bat these kayakers started scrambling. Obviously they can't see the pitch so they're listening on radio which is delayed so you have to act quick. They all start scurrying around like cockroaches when you turn on a light, it's great. 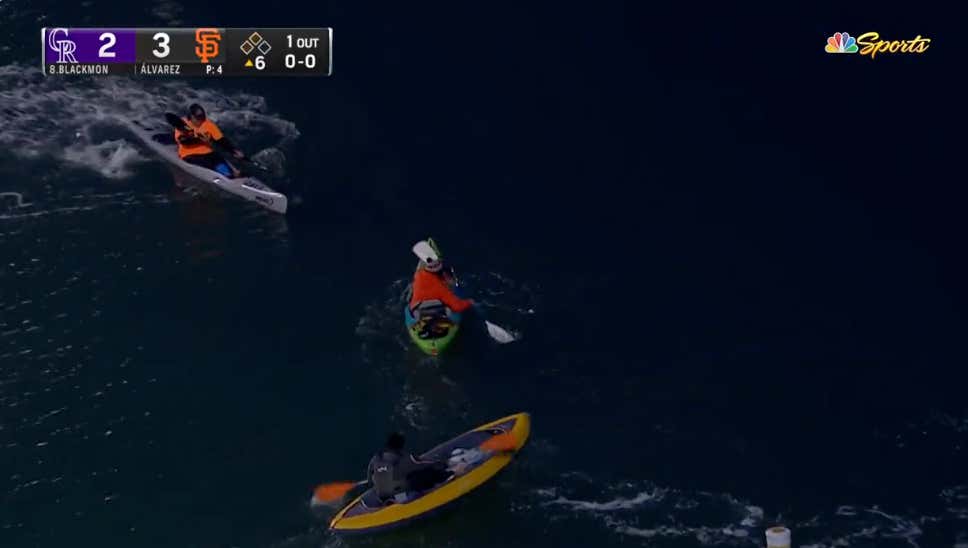 How does green kayak not get this ball? It's right there buddy. Use that oar and scoop it in. Doesn't he have a net? Where is that? Piss poor performance by the guy in green here. He makes an attempt to hit the ball with the oar but ends up flipping himself, unreal move. He choked. Straight up choked. He was the only one within 5 feet on it and didn't get it and now he's bobbing up and down in McCovey Cove trying to overturn the kayak and not drown over a ball.

Meanwhile, McCovey Cove Dave ends up ejecting from his kayak and looks like he is trying to help green kayak at first? But then you realize that he was just trying to get the green kayak out of the way cuz he was zeroing in on the ball. Camera cuts away to Blackmon rounding third and next we know Dave has the ball. That was nothing but heart and determination from Dave, he was by far the farthest away from the ball but he wouldn't be denied in his quest for another ball. He's a legend out in those parts and now you know why. And look at the yellow kayak! What are you doing dude? How do you not get this ball. Dave is literally a kayak away and he's in prime position but somehow can't close. It was McCovey Cove Dave and a bunch of first timers out there last night, horrible performance by anyone not in the color orange. No one was hurt and I assume green kayak guy was able to get back in, next time just try and keep your composure before McCovey Cove Dave slides in and scoops up your ball.

He also mentioned that since it's a milestone homer for Charlie Blackmon that he was going to give the ball back, what a guy. This is the late night entertainment we need, it's like a Global Guts competition or something, I love Splash hits and I love the kayakers fighting over the balls. McCovey Cove Dave is a legend for his performance last night, would not be denied. That is his cove, they should rename it "Dave Cove" cuz that guy gets every ball that plunges into the bay.

PS. His video on Mothers Day when he got the Yaz HR ball was very emotional, guy is a legend.