You know how the Baseball Hall of Fame voting went from a fun, harmless conversation we got to have that provided hundreds of hours of sports TV and radio every year into a tedious, desultory, soul-crushing referendum on PEDs and Curt Schilling's social media posts? To the point you just dread the thing you used to enjoy?

Well a similar dynamic has threatened the Patriots Hall of Fame voting over the last few years. And that is, every year when three names are put on the ballot, the issue of one name that's not on the ballot sucks all the air out of the room. And that name is Bill Parcells. The Parcells stans in Boston media are not as numerous as they once were, in that way there are fewer World War II vets in your town's Memorial Day parade every year. But like the men who saved the world from tyranny in the '40s, they are a fiercely loyal bunch. And can't simply stay focused on how great, say, Vince Wilfork's career was and how much he deserves the immortality Pats fans bestowed upon him. They want their Tuna in. Like the very justification for the existence of the Hall at Patriots Place depends on his induction. And they suggest the only thing standing between this grave injustice and their dream coming true is that meddling Kraft family. And not Parcells' .500 record in New England (32-32 regular season, 2-2 postseason) or the dozens of calls he made to the Jets offices from his hotel room in New Orleans when he was supposed to be getting his team ready for the Super Bowl. Until that wrong is righted, in their eyes no one can truly be free.

Which brings us to Romeo Crennel. Who could - and should - be the first coordinator inducted into the Patriots Hall. If you want a cause to take up, you could not have a better one.

I concede that RAC was only in charge of the Patriots defense for four seasons. Which, coincidentally, is exactly how long Parcells was here. The difference being that Crennel left after four years because he was wildly successful and turned himself into the hottest head coaching candidate in the league. And that interest was vindicated by the fact he's still drawing an NFL paycheck 17 years later and is leaving football of his own volition just a few days shy of his 75th birthday. Parcells, in contrast, left in 1997 after four years because he didn't like getting questions from Mr. Kraft, the man who wildly overspent $175 million of his own money to save the franchise a couple of years earlier.

And what did Crennel accomplish in those four seasons? He was the leader of a defensive unit that had one of the best runs in the modern history of football. The year before he came to Foxboro, the 2000 Patriots allowed the 15th most points in the league. In his first season, they improved to 6th fewest.

In the years 2003-04, when the Pats had the best back-to-back seasons in NFL history, winning two Super Bowls and going 34-4 in that stretch, Crennel's defenses gave up the fewest and second fewest points in the league, respectively. That '03 team was particularly nasty. They had three shutouts on the season and were one garbage time score by Jacksonville from putting together six straight home games without giving up a touchdown. The combined a league low 11 passing touchdowns with a league high 29 interceptions and 121 passes defensed, for an astonishing passer rating against of just 56.2. To put that in perspective, the Browns Kordell Stewart was 32nd among all QBs with a passer rating of 56.8. So the Patriots turned every quarterback they faced into the worst in football.

More to the point is what Crennel's teams did when it counted most. Not only did they go 9-0 in the postseason in his tenure, they beat league MVPs Rich Gannon, Marshall Faulk, Kurt Warner, Steve McNair and Peyton Manning (twice). The game plan to beat The Greatest Show on Turf Rams belongs in Canton. Crennel and Bill Belichick determined Mike Martz's entire scheme ran through the running back. And as the NFL Films version of the game put it, "The plan was to hit Marshall Faulk when he had the ball. And hit him when he doesn't." Mission accomplished.

But the numbers they did on Manning and the Colts in those two postseasons are where Crennel's true greatness shone through. Two weeks after Manning had a perfect passer rating in the 2003 Wild Card against Denver and a week after he posted a 22-for-30, 73.3%, 304 yards, 3 TDs, 0 INTs, 138.7 passer rating against Kansas City, the Patriots produced this gem: 23-for-47, 48.9%, 237 yards, 1 TD, 4 INTs, 35.5 passer rating. A game in which Hall of Famer Ty Law caught as many of Manning's passes (3) as Hall of Famer Marvin Harrison. And had more yards on his returns than Harrison on his receptions.

And as a testament to Crennel's genius, the Colts Bill (Na)Polian, who just happened to be on the Rules Committee, got the league to essentially outlaw the Patriots physical style of play. And so the next postseason, a week after the Colts put up 49 on Denver without having to punt, the Pats held them to 3 points. The game after that, these three glorious sons of bitches were taking a Gatorade shower together for the third and final time. 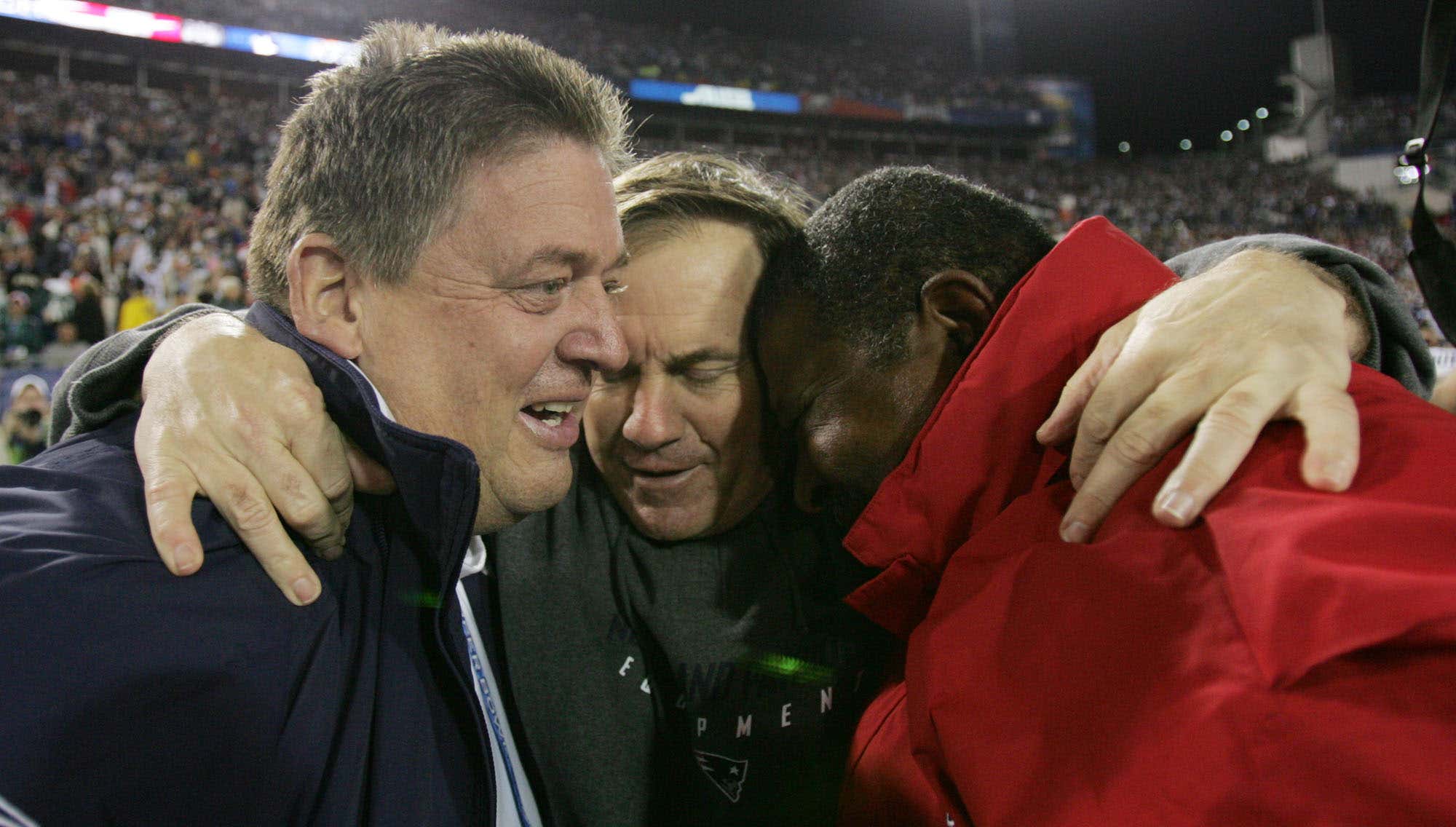 Of course Belichick gets most of the credit. And deserves it. But if you ask him - and someone most definitely will later on today, he'll tell you with first hand knowledge how indispensable RAC was in those early days of the Dynasty. Give this man his due and put him in the Hall in Foxboro. It's the only way to cap off his incredible career. And that will be justice.